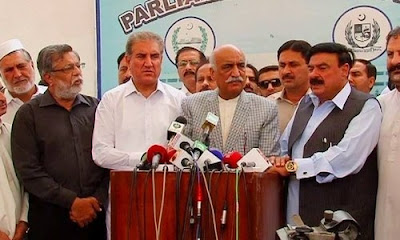 The opposition following a meeting on Friday reiterated its demand for Prime Minister Nawaz Sharif's resignation while calling for the National Assembly to complete its tenure.
"Excluding the Awami National Party (ANP) and Aftab Sherpao, all opposition parties are committed to demanding Nawaz Sharif's resignation," said Leader of the Opposition in National Assembly Khursheed Shah.
"Assemblies should continue their tenure," Shah said, adding that the opposition wants the democratic process to continue and is only calling for the PM to resign.
Speaking to the media after the meeting, Pakistan Tehreek-i-Insaf's (PTI) Shah Mehmood Qureshi said that the opposition had given Khursheed Shah the authority to call the NA session whenever he deemed fit. "On the basis of the ultrasound conducted by the joint investigation team (JIT), we feel that the patient should resign," Jamaat-i-Islami chief Sirajul Haq stated.
Qaumi Watan Party (QWP) Chairman Aftab Sherpao said that the ANP and QWP, however, wished to wait for the Supreme Court's (SC) decision before deciding on calling for the PM's resignation, adding that they agreed with the opposition on the other demands, including unconditional support for the SC.
PML-N parliamentary party meeting
“Not a single sentence [of the JIT report] proves that Nawaz Sharif is guilty of corruption,” PM Sharif said, reiterating his decision to stay in office, during a parliamentary meeting on Friday. Sharif said that he had faced all the challenges against him and had remained steadfast to his stance and ideology in the past, and would continue to do so.
The national economy could have done even better had it not been for the continuous conspiracies of anarchist political elements, added the premier.
Earlier, party members welcomed the PM to the meeting by giving him a round of applause.