Pakistan People’s Party (PPP) Chairman Bilawal Bhutto-Zardari on Wednesday said that Pakistan Muslim League-Nawaz’s (PML-N) decision to elevate Punjab Chief Minister (CM) Shehbaz Sharif to the post of party president is controversial because his tenure has been marred by allegations of corruption. 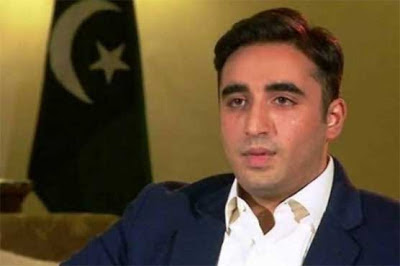 On Tuesday, the PML-N general council had selected former Prime Minister Nawaz Sharif as the supreme leader of the party while electing Shehbaz Sharif as acting president of the party. The meeting was held in the wake of a Supreme Court order that disqualified Nawaz from PML-N presidentship in the Elections Act 2017 case.
Talking to reporters, Bilawal said the Punjab chief minister had yet to answer questions about his involvement in corrupt practices in the Ashiana Housing Scheme and Multan Metro Bus cases.
When asked whether his party supported the judiciary or the government in the present scenario, he said that his party supported the masses, adding that PPP would take effective measures to resolve the problems being faced by the common man in Pakistan.
The PPP chairman said that the PML-N and Pakistan Tehreek-e-Insaf (PTI) claims of winning from Karachi in the upcoming general elections were no more than talk because the residents of the port city would reject PTI, PML-N and those exercising influence from abroad. 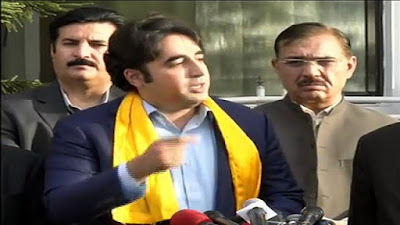 Pakistan Peoples’ Party (PPP) Chairman Bilawal Bhutto Zardari on Thursday said that the party will never permit the privatization of Pakistan International Airlines (PIA) and will resist any move on any platform to this end.
He said this during a meeting with a 15-member delegation of PIA employees belonging to the Peoples Unity, led by Hidayatullah Khan who had called on him at the Zardari House in Islamabad on Thursday.
PPP Secretary-General Nayyer Bokhari, Senator Farhatullah Babar, Chaudhry Manzoor and Faisal Karim Kundi were also present in the meeting.
Bilawal said that the party was gravely concerned as strong evidence about faulty policies being deliberately adopted to make the PIA and Pakistan Steel Mills (PSM) incur huge losses, running into hundreds of billions of rupees had surfaced during the past 5 years.
“The criminal neglect in running state-run entities shows that it was by design so that they incurred huge liabilities and thereby, a false justification was created for their sale at throwaway prices,” he said.
Recounting these faulty policies, he said that the PIA had no business plan and floated a thoughtless Premier Service which incurred a loss of nearly 3 billion rupees in a few months before the service was discontinued due to severe public criticism.
Bilawal further said that highly expensive lease agreements, open skies policy without consideration of national interest, and discontinuation of some profitable international flights led the PIA down a steep slope. “Huge amounts of landing rights in different parts of the country were given to just one foreign airline in one day and without reciprocity drastically reducing PIA’s market share,” he said.
Spokesperson Farhatullah Babar stated that the PPP Chairman also asked the Peoples Unity employees to prepare a comprehensive report on how the national airline was deliberately mismanaged in order to pave way for its sale at a throwaway price.
Additionally, Bilawal said that the Premier Service reached the brink of precipice after it was denied gas supply since 2015 and that too at a time when the production was 65 per cent.
The PPP chairman opined that the government’s malafide intent was apparent from the fact that the Senate Special Committee on PIA recommendations made to overhaul the Board of Directors have not been implemented even though under its implementation had become mandatory under the Rules of Business.
“The timing and manner of privatization were most intriguing as it was not being discussed in the Parliament,” Bilawal said.
“General elections were also round the corner and there was no time left for undertaking privatization transparently,” he added.
Bilawal said that an unannounced yet systematic transfer of lucrative PIA services to a private airline at a time when the chief executive of the country himself was in the aviation industry raised serious questions of conflict of interest which he said, will have to be answered.

Chairman Pakistan Peoples Party Bilawal Bhutto Zardari has extended heartiest greetings to Hindu community on the eve of Holi festival, which is being celebrated in Pakistan and across the world from Thursday. 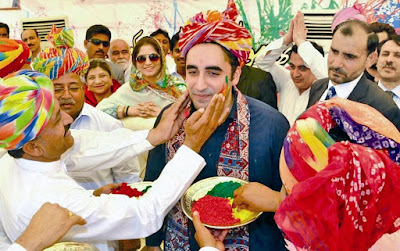 Holi festival signifies the victory of good over evil, the arrival of spring, end of winter, and for many a festive day to meet others, play and laugh, forget and forgive, and repair broken relationships in Hindu religion.
In his message, the PPP Chairman said that his Party stands for equal rights and opportunities for the non-Muslim citizens of Pakistan as it was the true torch-bearer of the ideology of our founding father Quaid-e-Azam Mohammad Ali Jinnah for an egalitarian society.
Bilawal Bhutto Zardari pointed out that PPP has provided constitutional guarantees to the rights for the non-Muslim Pakistanis and gave unprecedented representation in the Parliament and Party organizations.
He assured that every Pakistani was free to celebrate and perform his or her religious ceremonies and festivals in a secure environment.