#FloridaSchoolShooting - 🇺🇸 Guns in America: Is this a watershed moment? | Inside Story

A non-Indian diplomatic source from one of the FATF countries confirmed that the group had decided Pakistan would be put back on the watch list because the Kingdom of Saudi Arabia has stabbed Pakistan in the back by dropping opposition to the US-UK move against Pakistan.

Earlier in the week China, Turkey, and the Gulf Cooperation Council (GCC) were opposing the US-led move against Pakistan but by Thursday night both China and the GCC dropped their opposition, the diplomatic source said.
Interior Minister Ahsan Iqbal took to Twitter to thank Turkey for its unwavering support “against all odds”.
“The decision was taken yesterday,” the diplomat said.
He added that the financial consequences would not kick in until June, which, in theory, could allow Pakistan the wriggle room to fix the terrorist financing issues. “But the odds of that, particularly in an election year, seem slim,” he added.
Washington has spent the past week lobbying member countries of the Financial Action Task Force (FATF) to place Pakistan on the so-called “grey list” of nations that are not doing enough to combat terrorism financing.
Pakistan’s last-minute efforts to avoid being placed on the list, which included taking over bodies linked to a powerful figure, proved insufficient.

Although moral/religious values have lesser to do with geopolitics, states do invoke moral rhetoric when it suits their geopolitical interest. Pakistan’s policy choices strengthen the aforementioned dictum. For, Pakistan which proclaims itself as ideological Muslim state, has often used religion to create a favorable opinion for its official policies. Nevertheless, such play of morality/religion and politics in a diverse society like Pakistan has often proved itself dearly for the state. The following article analyzes how the state’s interplay with moral values (religion) and politics helped it to gain public support for its foreign policy choices. The article will also illuminate that how its chase for regional geopolitical interests have deteriorated the state’s internal social order, specifically, with reference to the current Middle Eastern crisis and policy debate going on in the state.

The geostrategic environment of the bipolar World, forced Pakistan to favor the US and Saudi backed pro-militant policies in the 1980s. The state used religious discourse as sweetener and pursued its geopolitical interest in Afghanistan as Jihad — the Islamic concept of Just War. Such policies bore no fruits desired in terms of Pakistan’s long sought strategic depth in Afghanistan. However, at the expanse of its internal peace and stability the policy makers continued to pursue regional objectives. For, sectarian violence emerged as counterproductive outcome of such policies which diminished intra-faith harmony and ripped the social fabric of Pakistan.
The following decades witnessed a surge in massive sectarian violence and target killings. Subsequently, the country’s social cohesiveness continued to bleed.
Additionally, with transition in the global power structure the interest of extra-regional states declined, so was their interest in the ‘project’. Neither they forged a policy to ‘undone’ what they sowed nor Pakistan bothered to analyze the ramification of its policies.

In the wake of 9/11, the global security discourse underwent a shift which subsequently shrank states’ space for independent policy making. Pakistan was not an exception. It had to revisit its polices to go with the current of global geopolitical environment. In fact, it had double dilemma to overcome.
On one hand, it had to realign its policies. Therefore, it enthusiastically joined the US led anti-terror camp. And, on the other hand, it had to build some logical argument to pacify its public sentiment. For, in Pakistan the public opinion based upon religious sentiment was predominantly against the policy shift.
Post-9/11, addresses of the then military dictator – Musharraf endorsed that once again moral rhetoric i.e. religion came as a handy source to justify state policies, hence, pacify masses.1 However, till date the state has failed to take all stakeholders on board.
Despite the fact that the state and citizens have paid (and are still paying) very heavy price in the War on Terror (WoT) and almost seventeen years of the coalition have been passed; there exist bulk of opinionmakers within state institutions, politicians, clergy, intelligentsia and masses who believe that the decision to join the Western bloc was irrational choice (read: anti-Islam). The backlash came forward in the form of increased militant activities against the state and its citizens. However, the recent concern is not about what choice did state make or should it make. The gruesome fact is the realization that state institutions have learned nothing from the past choices. Most recent example of such realization is manifested in the Inter Services Public Relations’ recent proclamation to send its troops to the Kingdom of Saudi Arabia (KSA). 2

Since the Yemen Conflict Pakistan maintained that diplomatic channels must be utilized to bridge up gaps between the Muslim World.3 Besides it did not support the KSA’s military intervention in Yemen, at least, officially.4 Apparently, the recent release declares the matter as ‘continuity’ of existent bilateral defense ties between the two and further maintains that Pakistan’s troops would not be stationed outside the KSA.5
However, the move came after the KSA’s ambassador visited Pakistan’s Chief of Army Staff.6 Not only that it has rung the bell among regional strategic analysts but also provided the country’s political elite ample reason to raise eyebrows. For, it was equally surprising for the country’s parliament which overtly refrained from military engagement in the Middle East. Back in 2015, the parliament unanimously decided against sending its soldiers to join the Saudi-led military coalition.7. For now, the Chairman Senate has summoned Defense Minister to explain how come the political opposition was kept blind8 over the issue? On one hand, it shows how weak the parliament is as state institution. And, on the other hand, it indicates that the state’s policy making process is elite’s domain only. The public (who eventually suffer due to backlash of such policies) and its opinion are largely ignored in the policy making process.
It is also evident that almost three years have been passed but the Saudi-led campaign has failed to restore peace in the troubled region. The boiling cauldron in Yemen is not a merely ‘civil war’ turned conflict. Instead, it is blend of multifaceted regional, local, and global power tussles infused by geopolitical interests. The historic sectarian strife restructured by the Iran-Saudi rivalry, the Palestine-Israel conflict, rapid rise of militant Islamic groups in Iraq, Syria, Libya, and Yemen have overwhelmingly contributed to the subsequent regional instability.
For almost seventeen years, Pakistan’s military forces have been engaged in the WoT. Since mid-2000s the state’s Western border is a source of trouble. Whereas, cross border tensions on its Eastern border are congenital problem for Pakistan. Against such backdrop, sanctioning new military engagement is not a viable option for the country’s war-weary forces. For, the move would likely escalate tensions in the Middle East. Subsequently, coldness in Pakistan-Iran relations would be inevitable. The policy makers need to think that can Pakistan afford unfriendly ties with all neighboring states, simultaneously.
Moreover, Pakistan’s population has diverse socio-cultural and ideological affiliations. Precedent suggests that state’s direct/indirect intervention in the Middle Eastern mayhem would likely infuriate and segregate its masses further upon sectarian lines. Hence, this will certainly add fuel to the sectarian fire. Reportedly, Pakistan’s Interior Minister has also admitted during the latest National Assembly session that incidents of violent sectarianism have been increased for last five years.9 In the recent scenario, being a party in the Middle-Eastern conundrum is the worst possible choice the state can make. As long as, there is no threat to the integrity of KSA and the holy places, Pakistan’s military engagement with the state should be avoided as per the parliament’s resolution.
In fact, being a responsible Muslim state, Pakistan must suggest to the KSA and Iran to refrain their overt and/or covert involvement in the Yemen. In past, such policies smacked Pakistan in the middle of highly inflammatory situation. It’s time for the state to revise its policies and reset regional priorities. Pursuing regional objectives at the cost of national peace and stability would be repetition of the same old policy mistake. Moreover, the move will strengthen the rift between the Muslim world. Therefore, this time it will be difficult for the state to do window dressing of its geopolitical interest upon moral/religious grounds and buy popular support.
No comments: Links to this post

#Pakistan - #PPP workers instructed to spread the message of the party 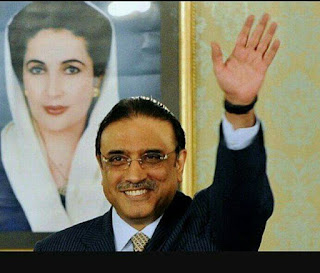 Former President of Pakistan and President Pakistan Peoples Party Parliamentarians Asif Ali Zardari has asked party workers to take the message of the party to every corner of the country.
Asif Ali Zardari said this while addressing officer bearers of Rawalpindi City. He said that Pakistan Peoples Party has always served the people of Pakistan especially it has worked for women and youth. He said that PPP services for the downtrodden masses are innumerable.
Former President said that the country has a young leader and every party worker should spread the message of Bilawal Bhutto Zardari. He said that all the workers of the party are ambassadors of the party Chairman. He said that party will win the next elections and will form government in centre and all provinces. He instructed party workers to start election campaign in their respective constituency.