Video - Putin: I am honest person; I like to communicate with ordinary people

Time to take a chill pill on China-Russia manoeuvre

By depicting a flotilla of three Chinese navy ships as a Spanish Armada, a number of Western media outlets and intelligence agencies have left no stone unturned in selling wolf tickets to their audiences. Once again they are hyping their "China Threat" cliche across Europe.
The Chinese flotilla, on its way last week to a joint exercise with the Russian navy, was shadowed by warships from a number of NATO countries. It was subsequently reported by media in the west, which self-righteously portrayed it as evidence pointing to "the rise of military" China.
However, promoting such selling points in this "wolf ticket" fashion does not enhance their moral high-ground, as they forget, if not deliberately, four basic things.
For one thing, freedom to navigate is a right claimed but often misused by Western powers. If Western navy ships sail into the South China Sea, as they do, and conduct disguised "freedom of navigation", like what the United States has done for numerous times there, why should Chinese ships, who act perfectly in accordance with international norms, be strangers to European waters?
Also, the ongoing maneuver is neither saber-rattling, nor aggressive, as it targets no third party. Easily dwarfed by the quantity and quality of the much larger NATO fleet in the area, the small group of Chinese ships is much more a benign visitor than a menacing intruder.
Thirdly, since China is increasingly an active contributor to international peace-keeping in various ways, holding maritime drills with partners is a requisite for future operations.
"Exercises are important tools through which the Alliance tests and validates its concepts, procedures, systems and tactics. More broadly, they enable military and civilian organizations deployed in theaters of operation to test capabilities and practice working together efficiently in a demanding crisis situation."
Those words come from the NATO website, stating very clearly the alliance's view that holding an exercise is an inborn and indispensable right. They surely deliver a thick ear to those trying to offer China the short end of the stick on the issue.
Last but not least, western media outlets apply a double-standard in reporting China's joint military maneuvers with other countries. While China's exercises with western countries, such as the U.S.-led Rim of the Pacific Exercise, are welcomed, the Sino-Russian drills are viewed disapprovingly.
Behind the recent misguided reports lies a Cold War mentality still haunting the West. As the Baltic Sea has many times been a watery battlefield for Western powers, the location of the China-Russia exercise serves as a perfect reminder to the West -- misreading the strategies of others can be both dangerous and costly. It is surely time for hotheads in the West to simmer down and take a chill pill on the China-Russia maneuvers, to recognize them for what they are -- a routine exercise similar to the many carried out by navies from across the world.
No comments: Links to this post

"Respondent No 1 (Imran Khan) does not have any record of the exact schedule of employment for himself, however, as an example Mushtaq Ahmed's contract is attached, it indicates what another lesser known cricketer was paid (later) along with all the perks," the reply submitted by Advocate Naeem stated. Imran Khan was responding to the Supreme Court's queries over a petition seeking his disqualification over alleged non-disclosure of assets, ownership of offshore companies and receipt of foreign funds for the party.
The PTI chief, who was the main petitioner against Prime Minister Nawaz Sharif seeking his disqualification on the basis of assets beyond his source of income, has been stating that whatever he earned was from the county cricket abroad.
A three-judge bench headed by Chief Justice Mian Saqib Nisar is hearing the petition of Pakistan Muslim League-Nawaz (PML-N) leader Hanif Abbasi, wherein he requested the top court to disqualify Imran Khan from being the member of National Assembly.
The PTI chief informed the apex court that he had started earning money abroad when he started playing cricked during his days as a student at University of Oxford, England. Then he was selected as a cricket player for Pakistan and Worcestershire in 1971, while he also played for Sussex County from 1977 to 1988. He claimed that all the payments made to him were income tax deducted at source. Imran stated that he also played for the Kerry Packer series, a cricket competition between 1977 and 1979, for $25,000 per year. Besides his earning, there were also the airfare, boarding, lodging costs and prize money.
Khan submitted that he played in Australia for New South Wales between 1984 and 1985, earning Australian Dollar 50,000.
In 1984, he mortgaged a one-bedroom apartment in London through Royal Trust in the name of Niazi Services Limited. The apartment was purchased for £117,500 on mortgage on 20 years and initial down payment of £61,000 to Royal Trust. He made the payment from his savings and earnings he received while playing for Sussex Country Cricket and the Kerry Packer series.
"These redemption amounts (GB Pounds 55,000) were mostly from the earnings from his (Khan) benefit year with Sussex while interest payments were made from the Australian Dollar 50,000 (equal to 25, 000 GB Pounds) received while playing for New South Wales in Australia in winter in the year 1984 - 1985 and from his salary income during the 68 months of the mortgage," the reply explained.
Khan said he managed to pay off the mortgage well before its due date as he had a benefit year in 1987 when he earned £190,000 and his savings. The PTI chief informed the court that he had to spend his days outside Pakistan to fulfil his commitment to Sussex Country Cricket and to participate in other international cricketing events between 1977 and 1988. Khan said as he was a 'non-resident', Pakistan's income tax laws did not apply to him.
The reply maintained that there could be no money laundering involved at any time, adding that Khan had been self-sufficient with all his financial obligations outside of Pakistan throughout his overseas career.

Another ‘missing’ aide of Zardari returns

A close aide of former president Asif Ali Zardari, who had been whisked away by unidentified people in Islamabad, returned home on Monday.


Nawab Leghari, a former adviser to the Sindh government, was abducted by unidentified men on April 4.
Until recently he was residing in Hyderabad’s defence area and only in recent past had shifted to Islamabad.
In May, Ashfaq Leghari and Ghulam Qadir Mari, two associates of the former president were recovered from Balochistan.
Mari, a landlord from Tando Allahyar, went missing when he was travelling from Sehwan to Hyderabad along with his guard and a driver. While Leghari, the former chief of the Sindh People’s Students Federation, went missing from Gadap Town Karachi.

Former President of Pakistan and President Pakistan Peoples Party Parliamentarians Asif Ali Zardari has strongly condemning bomb blast in Lahore has demanded to eliminate terror nurseries as well as the planners of this heinous crime.
In a statement former President said that the perpetrators of this blast are beasts and can never be pardoned.
Former President sympathized with the victims’ families and prayed to Almighty Allah to grant eternal peace to the departed souls and early recovery of the injured.
Chairman Pakistan Peoples Party Bilawal Bhutto Zardari directed party workers to donate blood for the injured. He said that ideology of terror has to be defeated. He also sympathized with the victims’ families and prayed for early recovery of injured.

Once considered as one of the most efficient public sector business venture, Pakistan Railways (PR) is in tatters today. Despite the lofty claims Railways Minister has made, the recent call for strike shows the dark side of the picture. The workers of the organisation have gone on strike until their demands are met.
It is important to note that workers of PR have some genuine demands that the government should accept. The demands are long overdue. The demands include personnel up-gradation, increase in salaries, rise in pensions and medical allowances of retired staffs. In a meeting held a month ago, the Minister promised the workers that their demands would be met. However, he has failed in fulfilling his promise so far. The ministry claims that it has achieved its target of 36 billion rupees. Assuming that the institution is on the right track, not awarding workers the gains of the success is unfair.
A majority of the department’s workforce finds it hard to meet the ends in the salaries they are getting presently. It is true that they are not well paid. The strike of the workers indicates that top management has no idea of the sufferings of the lower staff. It is also an indication of the fact that the bureaucracy has no comprehensive plan to deal with issues that Pakistan Railways is facing. While the government is spending money to refurbish the face of the Pakistan Railways, it’s sad to know that its workers do not enjoy any kind of relief.
Commenting on one of the demands, the PR spokesperson argued that the department would not restore drivers involved in accidents and loss of human lives. However, it seems that the drivers are made scapegoats to cover up institutional failures. If drivers are really responsible for accidents and loss of human lives, just sacking them is no punishment for such acts of negligence.
Along with little attention from the state, poor policies, mismanagement of expenses and funds, nepotism and political interference in the affairs of the department have ruined the organisation. The concerned authorities should address the structural and administrative failures of the department. If management fails to address the issues that PR is facing, a time will come when the public will be deprived of the cheapest mode of transportation. It is about time to meet the demands of the railway workers. The workers should enjoy the fruit of the targets that Pakistan Railways have achieved recently.
No comments: Links to this post 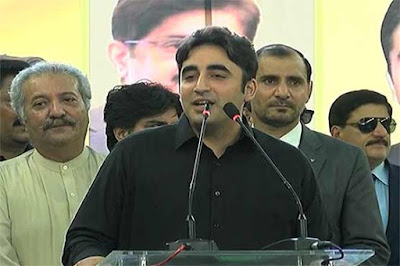 “We hope for justice from Supreme Court,” he said while media talk at the inauguration of underpass on Drug Road of Shahra-e-Faisal. Bilawal also chanted slogans of ‘Go Nawaz Go’ along with other PPP leaders and workers.
PPP Chairman maintained that the corruption of Prime Minister Nawaz Sharif was proved in JIT report. He appeared confident for disqualification of the premier.
While addressing to the gathering, Sindh Chief Minister Murad Ali Shah claimed the underpass was built in Rs. 660 million, highlighting the upcoming inaugurations of several other development projects.