After 17 years of US-led intervention in Afghanistan, country stares at uncertain political future

Notorious terrorist ringleader Aurangzeb Farooqi who has been named in many cases of terror attacks, murders and hate-mongering speeches, was the chief guest at Bahria Town despite the fact that he is a fourth scheduler under Anti-Terrorism Act 1997 and under counterterrorism National Action Plan.

Two days ago, peaceful and law-abiding Shia Muslims had laid foundation stone of Imam Bargah Jagir Ali Akbar (AS) and performed inaugural of Alam Pak. The permission granted by Malik Riaz to Farooqi and his outlawed terror group, is seen a deep-rooted plot to encourage violent extremism and fanaticism in Bahria Town in the name of sectarianism.

The entry of proscribed terror outfit, the mother of all terrorism in Pakistan, has brought a bad name to the reputation of Malik Riaz of Bahria Town. Banned Sipah-e-Sahaba (ASWJ) is the other name of Daesh in Pakistan and their terrorism against humanity is known to the entire world. 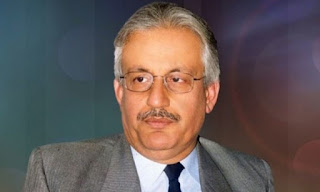 PPP Senator Raza Rabbani on Monday said it looks as if the PTI government was trying to "weaken the China-Pakistan Economic Corridor (CPEC)".
He made these comments during a debate held in the Senate on the incumbent government's performance on the economic front.
"There is news that suggests that the CPEC projects are being reviewed," Rabbani said while questioning if China was taken into confidence before bringing Saudi Arabia into the CPEC.
"If taken in the loop, what did China say about the matter?" he asked.
Last week, the government of Saudi Arabia signed three grant agreements with Pakistan to finance three road infrastructure and energy projects under the CPEC.
“These agreements have been inked in line with the understanding reached during Prime Minister Imran Khan’s recent visit to Saudi Arabia,” Information Minis­ter Fawad Chaudhry had said at the time.National Party Senator Mir Hasil Bizenjo, while commenting on the matter, said the federal government does not have the right to hand over projects like Reko Diq to Saudi Arabia, since "these projects fall under the Balochistan government's jurisdiction."
The information minister had also told the media that more agreements would be inked this week when a high-level Saudi delegation visits Pakistan.
The accords will be related to Reko Diq’s gold and copper mines and the oil refinery at Gwadar Port, Chaudhry had said, adding the delegation would comprise the Saudi investment team, minister for petroleum and minister for energy.
"Is there no one in the Balochistan government or the province to take such decisions? Does the government not know about the dispute between Iran [which borders Balochistan] and Saudi Arabia?" he asked.
"You are trying to turn Balochistan into a conflict zone," Bizenjo said while announcing that the until the government explains how these decisions were made, the National Party will hold an hour-long sit-in outside the Senate every day. According to Rabbani, Finance Minister Asad Umar had said before his election that the government would not go to the International Monetary Fund (IMF) for a bailout, "however, now he [Asad Umer] is saying that if need be the government might go to them."
Oil city will be established in Gwadar, NA told Minister for Water Resources Khusro Bakhtiar briefed the lawmakers in the National Assembly that the government has decided to broaden the base of the CPEC and accelerate its pace, Radio Pakistan reported. The minister accused the previous government of not paying due attention to Gwadar and vowed that the PTI government will give proper attention to this significant port.
“An oil city would be established beside this strategic port of the country,” the minister announced.
While criticising the policies of the PML-N government, Bakhtiar said that the current account deficit had reached an alarming figure of $18 billion due to the ill-conceived policies of the previous government.
Moreover, the circular debt has reached a staggering Rs583 billion, the minister said.
The lower house also adopted a resolution to condemn the Indian military attack on a civilian helicopter carrying AJK Prime Minister Raja Farooq Haider flying inside the territory of Pakistan.

The Supreme Court observed on Monday that it is the job of the Pakistan Tehreek-i-Insaf-led (PTI) government to regularise all properties located in the Banigala area of Islamabad, including the residence of Prime Minister Imran Khan.
While recalling that it was Khan himself who had approached the apex court with an application regarding illegal constructions in Banigala, Chief Justice of Pakistan (CJP) Mian Saqib Nisar said the prime minister would have to initiate the process of regularisation of the area by paying the required fee.
"Imran Khan should submit fees towards regularisation before anyone else," directed Justice Nisar, who was heading a three-judge bench.
The court ordered that all unauthorised constructions around Korang riverbed should be demolished in the light of a report prepared by the Survey of Pakistan.
At the outset of the hearing, the additional attorney general (AAG) presented the Survey of Pakistan's report regarding illegal constructions in Banigala. He informed the court that the reports prepared by the Capital Development Authority and the federal ombudsman are similar to the report of Survey of Pakistan.
He said an area of 21 square kilometres had been covered as part of the survey, which revealed that more than 600 kanals have been encroached upon.
The AAG informed the bench that so much trash had been dumped into an adjoining lake in Banigala that its water was standing still. He said the encroachments in the area could be removed if the court issues an order to this effect.
The CJP wondered how encroachments could be removed in Banigala, saying that besides illegal constructions issues like security and pollution are also impacting the area.
He said a new government is now in power and it should look towards resolving these issues. "Those responsible for illegal constructions need to be fined," the top judge remarked. He observed that while the constructions outside the limits of Korang riverbed could not be razed, those within its perimeters are "not acceptable in any condition".
He directed the federal government to regularise all constructions in the area, including its own.
Wrapping up the case to the extent of encroachments, the bench also ordered the government to pay its own penalties, and collect those due to be paid by citizens.
Babar Awan, the counsel representing Khan, informed the court that the matter regarding regularisation of illegal constructions in the area has been sent to the federal cabinet and sought time to confirm whether the cabinet has greenlighted the regularisation.
The top court subsequently ordered authorities to demolish all encroachments around Korang riverbed in the light of the report drafted by the Survey of Pakistan. The hearing of the case was adjourned until October 12.
On a suo motu, the apex court had taken up illegal constructions in Banigala on a letter written by PTI chief Khan. The PTI leader had invited the court’s attention towards the large-scale encroachment on the botanical garden, unchecked and unplanned construction in Banigala, massive denuding due to large scale tree felling and pollution of the Rawal Lake due to sewage.