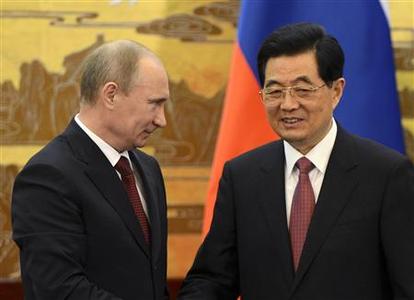 said on Wednesday he will boost military cooperation with China, including holding more joint exercises, after the United States announced plans to shift most of its warships to the Asia-Pacific by 2020. Putin referred to recent Sino-Russian joint navy exercises in the Yellow Sea as an example of military cooperation which, he said, would go on. "We will continue cooperation also between our military," he told Chinese Vice President Xi Jinping in Beijing, where he is attending a security summit and meeting his Chinese counterpart, Hu Jintao. "Recently joint navy exercises were held in the Yellow Sea, and they were the first of such exercises. We have agreed with Chairman Hu that we will continue such cooperation," Putin said. Chinese and Russian naval forces held six days of exercises in the Yellow Sea off China's east coast in April, with drills including anti-submarine operations and the rescue of hijacked vessels. China deployed 16 ships and two submarines, while Russia sent four warships from its Pacific fleet, according to Chinese state media. 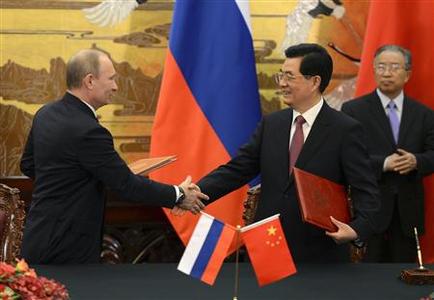 "We assign an important role to the joint initiative on strengthening security in the Asia-Pacific region and in this context we will maintain the relationship between our militaries," Putin said in an earlier statement. "We favor the formation of an open and equal-minded security and cooperation architecture in the region, based on the principles of international law," he said. China and Russia have forged close economic and diplomatic ties following years of hostility and suspicion during a large part of the Cold War, and both have looked askance at U.S. military involvement in what they view as their backyards. U.S. Defense Secretary Leon Panetta said on Saturday the United States would reposition its naval fleet so that 60 percent of its battleships would be in the Asia-Pacific by the end of the decade, up from about 50 percent now. China has long been wary of U.S. intentions, with hawkish voices in the People's Liberation Army saying that the United States was bent on encircling China and crippling its rise. China's fast-modernizing navy has stirred worries among neighbors, including in Southeast Asia, where several countries are in dispute with China over territorial claims in the South China Sea. Under the U.S. plans, Panetta announced the Navy would maintain six aircraft carriers assigned to the Pacific. Six of its 11 carriers are now assigned to the Pacific, but that will fall to five when the USS Enterprise is decommissioned soon. The number will return to six when a new carrier, the USS Gerald R. Ford, is completed in 2015. The U.S. Navy had a fleet of 282 ships as of March. That is expected to slip to about 276 over the next two years before beginning to rise toward the goal of a 300-ship fleet, according to a 30-year Navy projection released in March.
No comments: Links to this post

China on Wednesday vowed to continue its aid to Afghanistan in building an independent, peaceful and prosperous country without terrorism and illicit drugs. "We hope to enhance cooperation with Afghanistan in such areas as resource exploration, infrastructure building, energy and human resource," Foreign Ministry spokesman Liu Weimin told a press briefing. Afghan President Hamid Karzai is in Beijing to attend the Shanghai Cooperation Organization (SCO) summit scheduled for Wednesday and Thursday. Afghanistan is expected to be accepted as an observer state at the summit. "It (the acceptance as observer state) will contribute to closer cooperation between Afghanistan and the SCO in security, economic and social areas," said the spokesman. He said China will continue to back Afghanistan's efforts in safeguarding sovereignty and territorial integrity, promoting peace and development. Liu said the SCO has convened several consultations and meetings regarding the Afghanistan issue since 2009, and nailed down cooperation plans. "The SCO will continue to back Afghanistan's reconstruction efforts and hopes to play a greater role in the process," he added. The SCO was founded in Shanghai on June 15, 2001, and currently has six full members -- China, Kazakhstan, Kyrgyzstan, Russia, Tajikistan and Uzbekistan. Mongolia, Iran, Pakistan and India are four observer states, and its dialogue partners include Belarus and Sri Lanka.
No comments: Links to this post

Pak security out to kill me, says Asma Jahangir Leading rights activist Asma Jahangir has said she has received information that Pakistan’s powerful security establishment is planning to carry out a “murderous attack” on her, prompting civil society groups to condemn the threat to her life. Jahangir, who is also a leading lawyer and campaigner for democracy, told TV news channels about the threats to her life late Tuesday night. She said a credible source had informed her about a “murderous attack” planned on her by state agencies, following which she had restricted her movements and decided to remain at home. She contended that the plan to kill her had been hatched at the “highest level” of state agencies, which were apparently angered by her efforts to highlight human rights violation by security forces in the restive province of Baluchistan. Jahangir also provided details of what she said were steps taken against her by Pakistan’s intelligence agencies. She alleged when a group of lawyers recently tried to book a venue for a meeting in which she was to participate, they were barred from doing so by the Inter-Services Intelligence agency. On another occasion, some lawyers detained two persons who were part of a group that tried to attack her at a court complex, Jahangir said. “One of these persons had an Intelligence Bureau identity card and the other had an ISI card,” she told a TV channel. The Human Rights Commission of Pakistan said a “highly credible source” had provided information about a serious threat to Jahangir. “What makes the reported conspiracy to liquidate Asma Jahangir especially serious is, firstly, the environment of target killings in which dissident persons’ dead bodies are being dumped all over, and, secondly, the fact that the finger of accusation has been pointed at the extraordinarily privileged state actors,” HRCP said in a statement. Condemning the threats to Jahangir, the HRCP has made it clear to “all concerned, especially those who preside over the security apparatus,” to not underestimate the consequences of any harm caused to Jahangir. Jahangir recently defended Pakistan’s former ambassador to the US, Husain Haqqani, in the Supreme Court after he was accused of being behind a mysterious memo that sought US help to stave off a coup in Pakistan.
No comments: Links to this post

Former President SCBA Asma Jahangir has vowed to continue her mission of bringing facts to the fore in the interest of the nation no matter what it costs. Talking to The News late Monday night, she said the establishment had worked on a plan to assassinate her, which, somehow got leaked. It was learnt the information in this regard was passed on to her by an insider who asked her to remain vigilant to the imminent threat. Asma, however, kept the identity of the insider secret. “I have well-wishers everywhere. I just cannot reveal the identity of the person. All I can say is it was a credible piece of information,’’ Asma said. The renowned human rights activist simply refused to budge on her cause, saying she would fight for the rights of Pakistanis till the end, and didn’t care much about such threats. It was learnt her address in the recent Supreme Court Bar Association (SCBA) seminar might have triggered this response from the establishment. Asma, on the other hand, refused to comment on it. She said she had a plan to visit Belfast (N. Ireland) on the coming Wednesday, where she had been invited to attend a seminar of lawyers. Now, she said she would cancel the appointment in view of the emerging scenario back home. She said she would stay in Pakistan so as to convey a clear message to the powers that-be she was not scared of anybody. She informed The News a contingent of Rangers had been deployed at her residence in the wee hours of Monday, around 2:30am, on the direction of the Ministry of Interior. She said she was in contact with the government on this count. Asma said she would hold a press conference on Tuesday (today) for making public certain facts on the issue.
No comments: Links to this post