An independent rights watchdog on Monday raised concerns about incidents in Pakistan of forced conversions and marriages of girls from the country’s minority Hindu and Christian community to Muslim men.
The Human Rights Commission of Pakistan in its annual report said lawmakers need to pass effective legislation to end the practice - the extent of which remains unclear. It said around 1,000 cases of forced conversion of Hindu and Christian girls were reported just in the southern Sindh province last year. In some cases, it said the girls were recovered on court orders, but the situation in general remained appalling.
“Unfortunately, no authentic data is available on forced conversions” and marriages in Pakistan, the report said.
Ghazi Salahuddin, a senior member of the watchdog group, said Pakistani media have also faced “unprecedented curbs” in the previous year. However, he did not answer a direct question when asked whether the army was behind imposing such curbs on the press.
The 335-page “State of Human Rights in 2018,” released in the capital, Islamabad, is considered a report card of sorts on Pakistan, where Hindus, Christians and Sikhs and Ahmadis are tiny minorities.
The rights overview came out less than a week after a Pakistani court allowed two sisters from the Hindu community to live with their Muslim husbands, rejecting allegations from their parents saying their daughters were abducted and forcibly married.
The case of the sisters from the southern Sindh province drew the attention of Prime Minister Imran Khan, who ordered a government probe.
The investigations concluded the girls were 18 and 19 and that they were not forced to change their religion.
Joseph Francis, a senior member of the watchdog group, said the abduction of Hindu and Christian girls for conversion and marriages was now a common thing in the southern Sindh and eastern Punjab provinces.
The report said minorities “continued to face harassment, arrest or even death for simply living their lives in accordance with their beliefs in Pakistan in 2018.”
The report also expressed concern over what it says was the misuse of blasphemy laws in Pakistan, where around 70 people have been lynched since 1990 on charges of insulting Islam.
It said 40 people were currently on death row or serving a life sentence after being convicted on charges of blasphemy.
The report touched on last year’s release of Asia Bibi, a 54-year-old Christian woman who was freed by the Supreme Court after eight years on death row for blasphemy. For her safety, she has been living in an undisclosed location under tight security. She had initially hoped to join her daughters in Canada, where they have been granted asylum.
Bibi’s case has brought international attention to Pakistan’s blasphemy law, which carries a death sentence.
There have been widespread complaints that the law is used to settle scores and intimidate religious minorities, including Shiite Muslims.
https://cruxnow.com/church-in-asia/2019/04/15/pakistan-watchdog-decries-forced-conversions-curbs-on-media/
No comments: Links to this post 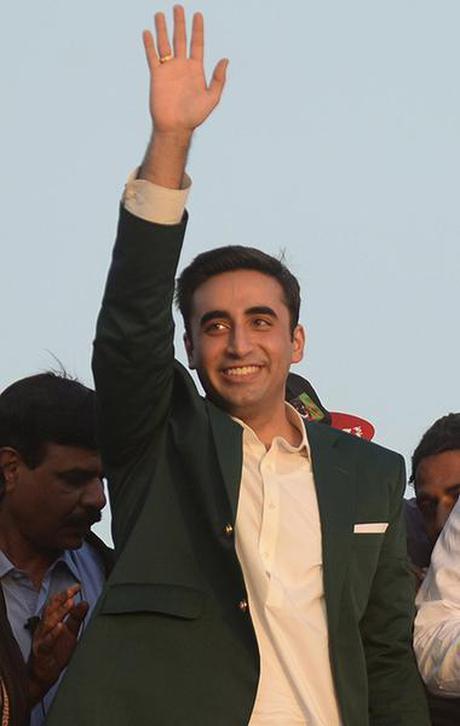 His speech last week, calling for strong action against all terror outfits, had resulted in a war of words. “The government has responded to my demand to sack Ministers associated with banned outfits by declaring me anti-state, issuing death threats & NAB notices. None of this deters us from our principle[d] stand; form joint NSC parliamentary committee & act against banned outfits,” tweeted Bilawal Bhutto-Zardari, chairman of the Pakistan Peoples Party (PPP), on Tuesday. Last week, Mr. Bhutto-Zardari had demanded the removal of three federal Ministers for their links with proscribed organisations. He had not named the three Ministers but everyone had guessed their names — Finance Minister Asad Umar, Minister of State for Interior Shehryar Afridi and Railways Minister Sheikh Rasheed Ahmad. In a series of tweets on Monday, Mr. Bhutto-Zardari confirmed these names by tweeting out news stories of these three Ministers hobnobbing with leaders of banned outfits. On March 16, Mr. Rasheed tweeted: Log kehte hain Bilawal bacha hai, Bilawal agar bach kar khelay toh acha hai warna siyaasat mein maara jaayega (People say that Bilawal is a child. If he plays cautiously, it will be good, otherwise he can die in politics — or die politically.) The PPP construed this tweet as a serious death threat as it believed that Mr. Rasheed has links with banned outfits. A united front There has been a war of words ever since the PPP chairman delivered a hard-hitting speech in the National Assembly on March 6. He appreciated the Opposition for showing a united front to the world after the Indian aggression post-Pulwama. He said: “There was no petty politicking… none of the Opposition members dared to declare Imran Khan a security risk for trying to make peace overtures to India.” Mr. Bhutto-Zardari also poked fun at the resolution to nominate Mr. Khan for the Nobel Peace Prize. After that, he spoke resolutely about terrorism. “We don’t need to fight terrorism, extremism, banned organisations because the world wants us to, because we are under international pressure, because we are under India’s pressure. As the Pakistan Peoples Party has been saying from the outset when most members of this House were in denial about the threats of extremism and terrorism, we have to combat this mindset for the future of our coming generation.” He questioned the state about the implementation of the National Action Plan (NAP). “What happened to ‘no more good or bad Taliban’? What happened to action against Punjab’s Taliban? What happened to action against banned organisations? What happened to judicial reform? What happened to combating terrorist financing and terror-related money laundering? And what the hell is mainstreaming? How is it possible that this House takes a unanimous decision and the state implements a diametrically contradictory policy of capitulation, appeasement and so-called mainstreaming? This is not the policy of the Parliament of Pakistan and this should not be the policy of Pakistan!” Foreign Minister Shah Mehmood Qureshi answered some of the Mr. Bhutto-Zardari’s questions but Finance Minister Umar made sexist remarks in his speech, mocking Mr. Bhutto-Zardari for using ‘Bhutto’ in his name, instead of just ‘Zardari’. Two days later, Mr. Khan also used the same kind of remarks against Mr. Bhutto-Zardari. Some experts believe that the harsh — but factual — criticism of the state’s policies has irked the government. “If this is how the PTI government wants to respond to facts, then how will it prove to the international community that it is serious in taking substantive action against banned organisations?,” asked PPP spokesperson Mustafa Nawaz Khokhar. He added that Prime Minister Khan himself has said on several occasions that he will not allow militant organisations to operate from Pakistani soil. Why, then, was his government being so defensive when the links of his Cabinet Ministers are pointed out, he asked? “We lost our leader Benazir Bhutto to terrorism. The PPP leadership is still taking a hard stand on terrorists despite security risks. The government must also show how sincere and serious they are when it comes to fighting terrorism and taking action against militant outfits,” he said. https://www.thehindu.com/news/international/bilawals-tweet-calls-for-removal-of-3-pak-ministers/article26583631.ece
No comments: Links to this post