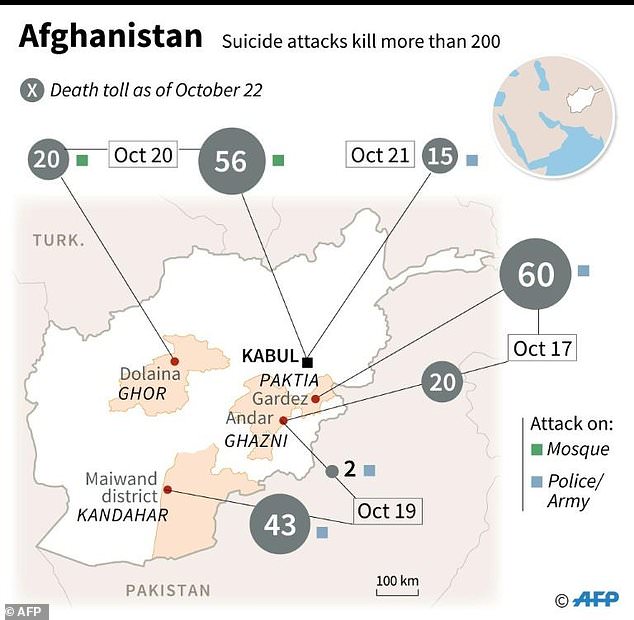 Victims of a suicide blast inside the Imam Zaman prayer hall said that despite promises from the government that the Shiite minority would be protected, there were no signs of security ahead of the bombing.
The massacre at a Kabul mosque last week highlighted the vulnerability of the country's Shiite minority, increasingly the target of the Sunni Islamic State group that is trying to stir up sectarian violence.
Victims of last Friday's suicide blast inside the Imam Zaman prayer hall told AFP they saw the bomber but no sign of security checks, despite the government's promise to beef up protection of Shiite mosques.
Dozens of men, women and children died in the explosion, just the latest in a series of attacks that have killed more than 200 Shiites in the past year.
"There were no body checks that day," Ali Gul told AFP at his home in a Shiite neighbourhood of the Afghan capital, where he is recovering from shrapnel wounds and burns.
"There was tight security during (the holy month of) Muharram but afterwards there was no checking."
Afghanistan has largely escaped the sectarian violence that has ripped apart other Muslim countries such as Iraq and Syria, but IS attacks have been increasing in the past year and experts worry Shiites might retaliate.
Shiites, who number around three million in overwhelmingly Sunni Afghanistan, have for months been calling for more protection for their religious sites in Kabul and across the country, where civilians and security forces are taking huge casualties as authorities struggle to beat back insurgents.
In September, ahead of Muharram -- the mourning period for the seventh-century killing of the grandson of the Prophet Mohammed -- the government announced a plan to arm more than 400 civilians to help defend Shiite mosques.
But the deadly attacks continued.
"It is 100 percent the government's fault for failing to protect us," said Haji Ramazan Ali, who suffered shrapnel wounds to his face and shoulder in last Friday's attack.
Rasoul Haidari, a shopkeeper, said: "To hell with the government, they don't care about us."
Shiite MP Mohammad Akbari said security at mosques may have slackened after the Ashura holy day on October 1, which has become a major target in recent years, and the latest attack should serve as a "wake-up call" for everyone.
- 'Explicitly sectarian' -
The Taliban greatly outnumber the Islamic State in Afghanistan. But despite its relatively small presence, the Sunni extremist group has been able to carry out devastating attacks against Shiites across the country.
Ibrahim, a community elder in the same Shiite neighbourhood as the Imam Zaman mosque, said the militants were trying "to create discord between Sunnis and Shiites but they will not succeed".
"Afghanistan has largely been spared from the sectarian violence that convulsed it in earlier decades but ISIS is trying to tear those sectarian divides back open," said analyst Michael Kugelman of the Wilson Center in Washington, using a common abbreviation for the group.
It would be a tragic development in a country that has suffered through Soviet occupation, civil war and now the Taliban's 16-year insurgency. Ordinary Afghans have paid a heavy price in the current conflict, with UN data showing 8,019 civilian casualties in the first nine months of this year, with militants responsible for more than 60 percent of the civilian deaths and injuries.
"I think we are far from that point (of sectarian violence) but that is the game IS is playing. They are trying to differentiate themselves from the Taliban by being far more explicitly sectarian," said Vanda Felbab-Brown, senior fellow at the Brookings Institution.
Repeated deadly attacks on Shiite mosques underscore the impotence of Afghanistan's security forces, demoralised by desertions, killings and corruption, as they try to get the upper hand against the Taliban and IS, and protect civilians. The government's poor intelligence capability exacerbates the problem. "Improvements on that front could go a long way toward bringing a measure of relief to vulnerable Afghan civilians," Kugelman said.
IS has proved resilient despite Afghan and US forces stepping up attacks on their stronghold in the eastern province of Nangarhar, which borders Pakistan. In April, the US military dropped the so-called Mother Of All Bombs on IS hideouts in a complex of tunnels and bunkers in province, killing over 90 militants.
Since President Donald Trump's renewed commitment to America's longest war in August, the US has ramped up aerial bombardments on insurgents, dropping 751 bombs and missiles in September, the most since October 2010. But the attacks continue -- though observers such as Kate Clark, a senior analyst at the Afghanistan Analysts Network, believe Afghans will continue to resist IS efforts to spark sectarian violence.
"In Afghanistan most areas have been through really nasty communal violence," Clark told AFP.
"People have got very strong personal memories of just how nasty that gets and how everyone suffers."
No comments: Links to this post

WHAT DO YOU GET IF YOU CROSS PAKISTAN’S GAME OF THRONES AND CHINA’S BELT AND ROAD?

Pakistan: US Gave List of 75 Afghan Militant Leaders to Islamabad 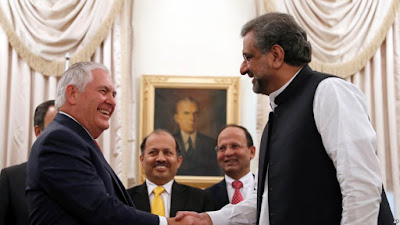 Washington has given a list of 75 Afghan militants to Islamabad in its bid to increase pressure on Pakistan to act against terror groups operating from that country.
"The Haqqani network is on the top of the list, but none of the militants are Pakistanis," Pakistan Foreign Minister Khawaja Asif told lawmakers on Wednesday, referring to the list.
The list is part of a series of efforts by Washington to move toward the implementation of its new South Asia strategy, announced by President Donald Trump in August, in which countries were put on notice not to tolerate within their borders militant safe havens, which terror groups use to disrupt regional security.
The list of militants was reportedly handed over to Pakistani civil and military leaders by U.S. Secretary of State Rex Tillerson, who, on a trip to the Middle East and South Asia, visited Islamabad on Tuesday to urge Pakistan to deny safe havens to militant groups.
Tillerson on Pakistan
Tillerson told reporters at a news conference in Geneva, the last stop of his five-day, six-nation trip, that he'd conveyed a very clear message to Pakistan.
"Here's what we need for Pakistan to do. We are asking you to do this; we are not demanding anything. You are a sovereign country. You'll decide what you want to do, but understand this is what we think is necessary," Tillerson said. "And if you don't want to do that, don't feel you can do it, we'll adjust our tactics and our strategies to achieve the same objective a different way." Pakistan's Foreign Minister Khawaja Asif, however, said many of the Taliban leaders whose names were on the list were now operating as "shadow governors" in neighboring Afghanistan, or were no longer alive.
Kabul and Washington have not yet commented on Asif's remarks. U.S. and Afghan officials have in the past indicated that Afghan Taliban members were enjoying safe havens in Pakistan.
The Haqqani network, a U.S.-designated terrorist group that has been blamed for numerous deadly attacks inside Afghanistan against the U.S.-led NATO forces and the Afghan government, is reportedly based in Miram Shah, a town in the Federally Administered Tribal Areas in northern Pakistan.
Concrete steps
While Tillerson's recent move was significant — it was one of the first concrete indications that the Trump administration is taking a tougher line on Pakistan to get it to crack down more robustly on terror — the real significance will depend on how Pakistan complies, analysts said. "There is good reason to believe that Pakistan will act on this request to an extent. It will want to convince Washington that it is ready to cooperate," Michael Kugelman, a Pakistan analyst at the Woodrow Wilson Center in Washington, told VOA.
"That said, there is also good reason to believe that this list contains some terrorists that Pakistan won't want to go after, particularly high-value Afghan Taliban and Haqqani network leaders that serve as useful assets to the Pakistani security establishment," Kugelman added.
The significance of Tillerson's gesture also depends on how the U.S. will respond if Pakistan does not deliver, he said.
"Would the U.S. try to go after these terrorists with drone strikes? Or might it even send commandos into Pakistan to apprehend them?" Kugelman said.
Tillerson, however, said the U.S. cares more about Pakistan's actions than the country's rhetoric.
"We put our expectations forward in no uncertain terms. We're going to chart our course consistent with what Pakistan not just says they do, but what they actually do," Tillerson said, adding that he had "frank and candid" discussions with leaders in Pakistan.
Peace talks
Following his meeting with Afghan President Ashraf Ghani and other senior Afghan government officials at Bagram Air Base, close to Kabul, Tillerson said the U.S. would be in Afghanistan for as long as it took and that the Taliban would not achieve a military victory.
"And there are, we believe, moderate voices among the Taliban, voices that do not want to continue to fight forever," Tillerson said in Afghanistan. "There's a place for them in the government if they are ready to come, renouncing terrorism, renouncing violence and being committed to a stable, prosperous Afghanistan."
Pakistan is viewed by many as an influential facilitator in the Afghan peace process. Following Tillerson's departure from Pakistan, the U.S. Embassy in Islamabad issued a statement highlighting U.S. expectations from Pakistan to help end the violence in Afghanistan.
"The secretary reiterated President Trump's message that Pakistan must increase its efforts to eradicate militants and terrorists operating within the country," the statement read. "To address those concerns, the secretary outlined the United States' new South Asia Strategy and the vital role that Pakistan can play in working with the United States and others to facilitate a peace process in Afghanistan." Pakistan's Asif, however, said his country's influence on the Afghan Taliban had lately diminished and that the group had found "new sponsors" in the region, a suggestion that the insurgent group has established ties to Iran and Russia.

Chief Minister Sindh Syed Murad Ali Shah on Friday termed recent claims by PTI leaders of being denied entry to the shrine of Lal Shahbaz Qalandar as a "drama".
Shah asked if the doors of the shrine were closed, how was it possible that senior PTI leader Shah Mehmood Qureshi entered the premises.
He further said he had respect for Qureshi before but has lost respect for him following the shrine accusations.
The chief minister also alleged that supporters for the recently held PTI rally in Sehwan were brought from other areas. He also termed Imran Khan an unfortunate individual for failing to gain entry into the shrine.
"The people of Sindh only favour PPP," said Shah.
Earlier, the PTI chief regretted being denied entry to the Lal Shahbaz Qalandar shrine in Sehwan. He said the administration made scores of "lame excuses" and said they claimed PTI leaders had armed guards. "Footage shows that that is not true."
Pakistan Peoples Party Chairperson Bilawal Bhutto-Zardari also took notice of reports regarding PTI Chairperson Imran Khan being barred from entering the shrine of Lal Shahbaz Qalandar in Sehwan.
According to a statement issued from Bilawal House, the party chairperson has said the shrines of Sufi saints should not be used for political point scoring.
No comments: Links to this post