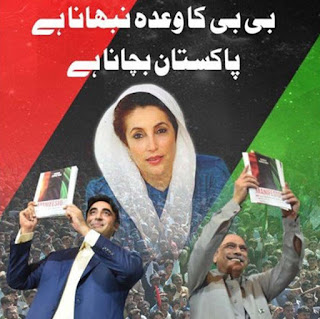 PPP's campaign is focused on the agricultural revolution and pro-farmers policies.
As Pakistan prepares for its general elections on July 25, major political parties have already launched their manifestos.
The Pakistan Peoples Party (PPP), the country's leading centre-left party founded by Zulfikar Ali Bhutto and headed by Bilawal Bhutto Zardari, was one of the first political parties to have unveiled its election campaign on 30th June, followed by the right-wing, Pakistan Muslim League, PML-N, founded by former prime minister, Nawaz Sharif, that launched its political campaign on July 6 with the slogan 'vote ko izzat do — khidmat ko vote do' (Honour the vote — vote for performance).
At a recent public address in a stadium at Muzaffargarh District, Bilawal said, "Our opponents enjoy no support of the masses and they were depending upon the invisible forces," the Tribune Pakistan reported, adding that he joined politics to carry the mission of his mother.
“PPP will provide equal chances of progress to every individual along with better health and education facilities. No power on earth can stop me from fulfilling these promises of Shaheed Benazir Bhutto for which she struggled for her whole life even when she was imprisoned, exiled and faced one dictator after the other,” he said.
PPP's campaign is focused on the agricultural revolution and pro-farmers policies.
"In the PPP manifesto, there is a revolutionary programme for farmers," Bilawal added that PPP has always introduced farmer friendly manifesto because "when the farmers prosper, the country prospers." He added that PPP will follow the same pattern of Benazir Income Support Card introduce Benazir Kisaan card and Benazir food card to end poverty under its ‘bhook mitao programme’ (Hunger Elimination program).
According to the Election Commission of Pakistan (ECP), nearly 350,000 military personnel will be deployed inside and outside polling stations for the election day to maintain law and order. 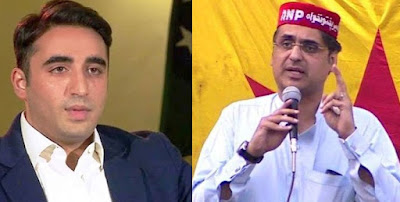 Pakistan Peoples Party (PPP) chairman Bilawal BhuttoZardari expressed sorrow over the martyrdom of Haroon Bilour. He said it was becoming clear as to who terrorists wanted out of the election race.http://www.thesindhtimes.com/sindh/07/bilawal-bhutto-zardari-expresses-deep-sorrow-martyrdom-haroon-bilour/“The terror attack on pro-democracy individuals is a conspiracy,” Bilawal said, adding that they shared grief of the Bilour family.
“The nation should be aware of the fact as to what do terrorists wish,” the PPP chairman added.

At least 12 persons including Awami National Party (ANP) leader Haroon Bilour were killed in a suspected suicide blast which targeted an election gathering of ANP in Yakatoot area of Peshawar on Tuesday night, a senior police official said. 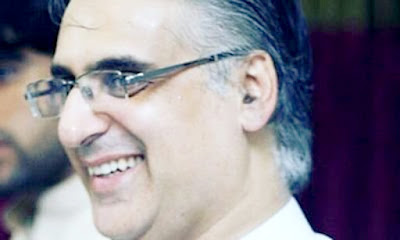 Peshawar Capital City Police Officer (CCPO) Qazi Jameel said that more than 30 people were injured in the explosion, who have been shifted to Lady Reading Hospital.
The blast took place when Haroon Bilour, who was contesting elections from PK-78 constituency, arrived at the site where the ANP workers had gathered for a corner meeting. Bilour suffered serious injuries and was shifted to the hospital where he succumbed to his wounds.
The police officer did not confirm the nature of the blast, however, a local ANP leader while talking to DawnNewsTV said that a suicide bomber blew himself when Bilour entered the compound where the meeting was being held.
The rescue teams and law enforcement agencies have reached the site of the blast. Police and bomb disposal officials are collecting evidence from the site of the blast and have started an investigation into the incident. Haroon Bilour was the son of senior ANP leader Bashir Ahmed Bilour who was killed when a Pakistani Taliban bomber blew himself up in a party meeting in Peshawar in 2012.
The following year in 2013, the Tehreek-i-Taliban Pakistan (TTP) had claimed responsibility for an attack at an ANP rally in Peshawar, in which 15 people were killed. The TTP spokesperson at the time, Ehsanullah Ehsan, had told journalists that Haroon was the target, but "unfortunately Ghulam Ahmed Bilour got injured". The ANP, which governed the Khyber Pakhtunkhwa province from 2008 to 2013, has been a continual target of militant groups operating in the northwest. The militants killed hundreds of ANP leaders and supporters in attacks around the 2013 election.
Earlier this month, seven people including a candidate of the Muttahida Majlis-i-Amal were injured in an explosion during an election rally near Takhtikhel canal.
The Taliban have time and again threatened to target secular parties for what they call supporting the military action in tribal areas and the “war on terror”. Although there has been no immediate claim of responsibility for the attack, the city of Peshawar has for decades been a victim of militancy due to its status as a frontline for the ongoing war against terrorism as well as its proximity to the restless tribal areas and the Pak-Afghan border.
Politicians under threat from terrorists
The Natio­nal Counter Terrorism Authority (Nacta) on Monday had revealed the names of six personalities, including Imran Khan and Hafiz Saeed’s son, who could be targeted by terrorists during the ongoing election campaign. “Six people include Pak­istan Tehreek-i-Insaf chairman Imran Khan, Awami National Party leaders Asfandyar Wali and Ameer Haider Hoti, Qaumi Watan Party head Aftab Sherpao, Jamiat Ulema-i-Islam-Fazl leader Akram Khan Dur­rani and Hafiz Saeed’s son Talha Saeed. Moreover, there are threats to senior leadership of the Pakistan Peoples Party and Pakistan Muslim League-Nawaz,” Nacta director Obaid Farooq said while briefing the Senate Standing Committee on Interior.
He said Nacta had forwarded 12 threat alerts to the federal interior and provincial home ministries as well as law enforcement agencies.
No comments: