Pakistan’s Minister for Higher Education has announced that girls who cover their faces will be given extra college credits. Minister Syed Raza Ali Gilani made the remarks while speaking at an Education Board meeting on Tuesday.
Minister Gilani said that girls who attend public college should be required to wear the Hijab, The Minister said:

Female students should be required to wear the Hijab, and as an incentive, the Department of Education will allocate 5 extra attendance credits to those who have less than 65% attendance.

The statement caused outrage among students and many took to Twitter to condemn the Minister’s statement.
After the uproar on social media Minister Gilani backtracked on his statement and said:

“It is only a proposal, no incentive has been given yet,”

However, the provincial government rejected the report calling it “absolutely wrong”.
https://www.rabwah.net/pakistan-offer-extra-college-credits-girls-cover-faces/
No comments: Links to this post 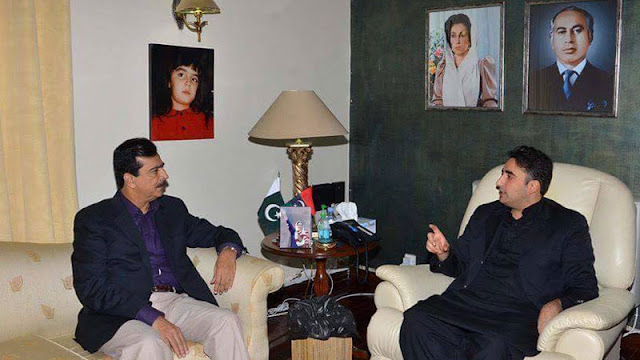 Pakistan People’s Party (PPP) Chairman Bilawal Bhutto on Monday met former prime minister Yousaf Raza Gilani in Multan and discussed the overall political situation of the country.
The date for the Multan rally was discussed and Bilawal Bhutto said that the party’s reorganisation is complete and now it is the time to go public. He added that preparations for the general elections must start.
Security issues were also discussed for the rally in Multan. “Multan is ready and the rally will determine the direction of national politics,” Gilani said.

Chairman Pakistan Peoples Party Bilawal Bhutto Zardari has strongly condemned brutal murder of PPP leader Babar Suhail Butt in Lahore and accused Nawaz government of letting out terror groups against the PPP workers across Punjab. In a statement issued here, the PPP Chairman said that PPP workers are being targeted under a plan all over Punjab and the latest target-killing of PPP leader Babar Suhail Butt after the previous attack on PPP leader Shaukat Basra and killing of a worker has exposed such plan. Bilawal Bhutto Zardari also criticized the Sharif administration for delaying the registration of FIR and asked them to accept the case as being asked by the heir of the Butt family without any further delay. He warned that patience and tolerance of the PPP workers should not be tested as the Sharif government cannot survive if the Party Jiyalas are compelled to resort to protests through such terror-kind of attacks on PPP cadres. Bilawal Bhutto Zardari expressed sympathies and solidarity with the bereaved family of Shaheed Babar Suhail Butt and prayed to Almighty Allah to rest eternal peace to the departed soul. He said PPP leadership and workers won’t forget Shaheed Babar Suhail Butt for his commitment, loyalty and sacrifices for the Party and its democratic struggle. https://ppppunjab.wordpress.com/2017/03/13/bilawal-bhutto-condemns-target-killing-of-babar-suhail-butt-in-lahore/
No comments: Links to this post