Video - Interview With #Pakistan’s Ex-Envoy To US Husain Haqqani 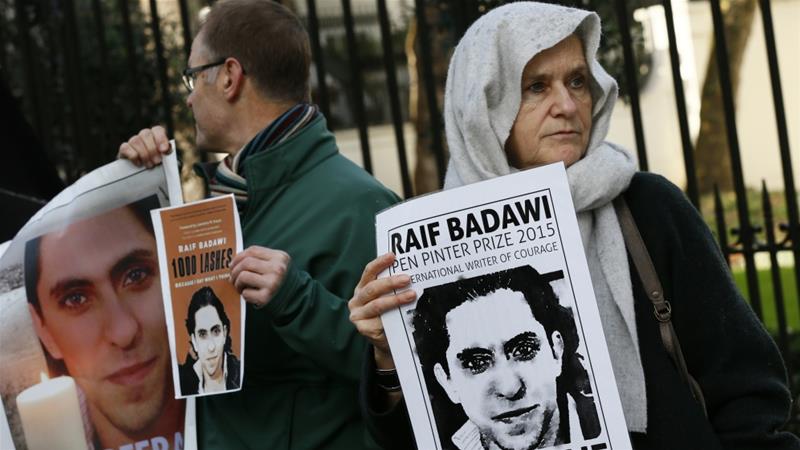 US Vice President Mike Pence on Thursday called out ally Saudi Arabia for the suppression of religious liberties and urged it to release Raif Badawi, a blogger imprisoned for reportedly insulting Islam.
Pence's highlighting of Badawi's ill-treatment comes in light of US legislators accusing the Trump administration of failing to act against the kingdom's leaders for the killing of Saudi journalist Jamal Khashoggi.
In an address to the Ministerial to Advance Religious Freedom conference at the State Department, Pence noted the detention of religious dissidents in Eritrea, Mauritania, Pakistan, and Saudi Arabia.
"All four of these men have stood strong in defence of religious liberty despite unimaginable pressure, and the American people stand with them," Pence said.
"The United States calls upon the governments of Eritrea, Mauritania, Pakistan and Saudi Arabia to respect the freedom of conscience and let these men go."
Republican and Democratic legislators - citing evidence of Saudi Crown Prince Mohammed bin Salman's role in the Khashoggi case, and incensed over the civilian death toll from the Saudi-led air campaign in Yemen that has killed thousands - have ramped up efforts to block President Donald Trump's arms sales to Saudi Arabia.The CIA has determined with "medium to high confidence" the Saudi crown prince, considered the de facto ruler of the kingdom, ordered the grisly killing of Khashoggi at its Istanbul consulate last year.
1,000 lashes
Badawi, who set up the Free Saudi Liberals website, was arrested in June 2012 for offences that included cybercrime and disobeying his father - an act considered an offence in Saudi Arabia.
The prosecution had demanded he be tried for apostasy, which carries the death penalty in Saudi Arabia, but a judge dismissed that charge.
He was sentenced in 2014 to 10 years in jail, fined $267,000, and given 1,000 lashes after prosecutors challenged an earlier sentence of seven years and 600 lashes as too lenient.
His public flogging in 2015 generated a global outcry.
Pence also cited the detention of a 90-year-old Orthodox Church patriarch by Eritrea, the jailing for apostasy of Mohamed Ould Cheikh Ould Mkhaitir, a blogger in Mauritania, and the imprisonment by Pakistan of Junair Hafeez, a lecturer accused of blasphemy.
The case of the Pakistani lecturer is likely to be raised next week in meetings in Washington between Trump administration officials and Pakistani Prime Minister Imran Khan in his first-ever meeting with the US president.
https://www.aljazeera.com/news/2019/07/demands-saudi-arabia-release-critic-islam-190718165243909.html
No comments: Links to this post

The Senate Panel on Human Rights on Thursday expressed displeasure at the fact that the despite commitment at the highest level and repeated reminders by the Pakistani government, Saudi Arabia did not share the list of prisoners it had announced to release during the crown prince’s visit to Pakistan upon the special request of Prime Minister Imran Khan. Senate Functional Committee on Human Rights was told that at present 114 prisoners in Riyadh and 128 in Jeddah are imprisoned due to pending payment of fines because of their financial situation and the fines begin from Rs8,000 and go till Rs2.2 million. Other than this, 3,000 people are imprisoned in Saudi Arabia over criminal offences. While discussing the matter of incarceration of a Pakistani national, Mureed Abbas, languishing in Saudi prison for the last three years due to non-payment of fines, Additional Secretary Middle East Nadeem Khan told the committee that he went to Saudi Arabia as a driver and had an accident for which he was imprisoned and fined. His sponsor has a claim of 27,000 Saudi Riyals. He said that the ministry is trying to get information about the sponsor and then Pakistan will work for the fine to be waived off. He also said that the government is trying to give relief to prisoners but cannot pay all the fines. He also observed that the problems being faced by the Pakistani community abroad is due to the high number of people, a disorganised community and lack of funds. The committee members remarked that Pakistanis going abroad should be trained to behave well when outside the country and a fund should be maintained for paying their fines. The committee observed that the human rights ministry maintains a fund to pay for the prisoners who are from weaker segments of society but it is permissible for only within the country. The committee considered working out a proposal of bringing an amendment in Pakistan Penal Code (PPC) or any other relevant law to bring the overseas prisoners also under its ambit. The committee was told that there is a similar fund maintained by the Ministry of Overseas Pakistanis Foundation and a welfare fund maintained by missions abroad but they are for different purposes and cannot be applied to payment of fines. The committee also decided to hold a briefing of the fund of human rights and to write to provincial governments to feel their responsibility towards contributing in this fund. The ministry was also directed to call an inter-ministerial meeting to get an understanding about the available resources and formulate a mechanism. Ministry of Interior told the committee that such an inter-ministerial committee is already working in the Foreign Office (FO) and their recommendations may be seen by the committee. Therefore, the committee decided to call the members of the committee in next meeting along with their recommendations. https://www.pakistantoday.com.pk/2019/07/04/saudi-arabia-fails-to-share-prisoners-list-despite-high-level-commitment/
No comments: Links to this post

Video - Message to President Trump. Why Imran is in USA & what President should not forget

Does anyone really believe the Pakistanis’ promise that they will be better partners in the war on terror? When Pakistan Prime Minister Imran Khan visits Washington this week, he will have the benefit of meeting an American president with a short memory. Just a year and a half ago, Donald Trump tweeted that the U.S. “has foolishly given Pakistan 33 billion dollars in aid over the last 15 years, and they have given us nothing but lies & deceit.” He then announced a suspension of that aid until Pakistan ended its relationship with various terrorist groups. Now Trump is changing his tune. Last week he welcomed Pakistan’s arrest of the leader of the terrorist group that went on a four-day killing spree in Mumbai in 2008, despite the fact that he has been arrested and released several times before. Trump tweeted that the arrest was the result of pressure building over the last two years. Some of this change in tone is to recognize the baby steps Islamabad has taken to address longstanding U.S. concerns. Khan’s government recently announced that it was investigating the funding of some terrorist groups the U.S. has long accused Pakistan’s military intelligence service of sponsoring. Nonetheless, these steps are not nearly enough. Dr. Shakil Afridi, the heroic Pakistani physician who helped the CIA identify Osama bin Laden before the 2011 raid that killed him, remains in a high-security prison. According to recent reports, he is severely underweight. A more powerful reason that Trump is changing his tune is that he needs Pakistan’s cooperation for his plan to withdraw U.S. forces from Afghanistan. Since the fall, U.S. special representative Zalmay Khalilzad has been negotiating what he says will be a peace agreement with the Taliban, whereby the group shares power with the elected government in Kabul. Nonetheless, the Taliban have continued a terror rampage against civilians and the military, killing a U.S. service member this month. The Pakistanis have enough short-term leverage with the Taliban to get them to allow an orderly exit of U.S. forces fighting America’s longest war. In this respect, one might argue that a little amnesia can go a long way. Isn’t the pageantry of a White House visit a small price to pay for tamping down the Taliban? Maybe so — but this logic also exposes the foundational problem with the U.S.-Pakistani relationship. Pakistan’s military and intelligence agencies play a double game. Its leaders give lip service to the wider war on terrorism when in Washington. Meanwhile its operatives in Southeast Asia continue to supply and fund the terrorists the U.S. has been fighting. Husain Haqqani, a former Pakistani ambassador to Washington and now a fellow at the Hudson Institute, said Pakistan’s support for the Taliban is evident even in the peace negotiations. The planes that fly Taliban leaders to negotiations in Doha, he said, are provided by Pakistan’s military intelligence service. Thomas Joscelyn, a senior fellow at the Foundation for the Defense of Democracies and co-founder of the Long War Journal, said the olive branch from Trump counts as a reversal of his administration’s policy. “The strategy that Trump endorsed in August 2017 was intended to put pressure on Pakistan to try to change their behavior,” he said. Yet to this day, the Pakistani military continues to support senior Taliban leaders as well as the deadly Haqqani network in the border region near Afghanistan. All of which raises the question: Why should anyone believe the Pakistanis this time around? Trump’s advisers would say that the meeting offers an opportunity for Pakistan to get out of the president’s doghouse. A senior administration official told reporters Friday that Khan could agree to make permanent his government’s recent gestures toward counterterrorism. What’s the harm in trying a softer touch after taking a hard line? The Pakistanis have proved they can be spoilers when it comes to Afghanistan. A little pomp and flattery could persuade them to be more constructive. That’s the positive spin, anyway. The deeper problem is that the U.S. has no real leverage in Afghanistan. Khan knows this, and so does the Taliban. Trump has made it clear that he wants U.S. forces out of the country, the sooner the better. Even if the Pakistanis can coerce or persuade their Taliban allies to back off until the U.S. leaves, what will stop them from violating a peace agreement after the U.S. is gone?