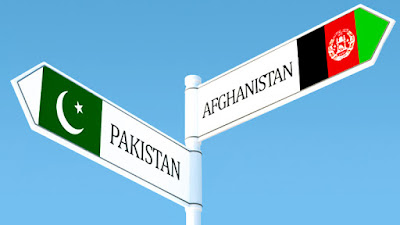 Border tensions between Pakistan and Afghanistan are heading towards a dangerous level with recent incidents. In wake of the attack on Sehwan Sharif, Pakistan closed the border with Afghanistan for security reasons and conducted cross border raids against Jamaatul Ahrar (JuA) for neutralising its training camps. However, the closure of the border also led to a brewing deadlock with Afghan officials over the last couple of weeks due to non-cooperation from either side over various issues (with the bulk of the onus lying on Kabul). Moreover, a militant attack originating from Afghan territory martyred five soldiers, indicating Kabul’s weakness in controlling the use of its own territory, unlike Pakistan.
Defence Minister Khawaja Asif’s recent remarks on Kabul, though controversial, present some hard facts that one cannot shy away from. On the floor of the parliament, he pointed out towards Kabul and said, ‘If you have no control over the territories, stop calling them part of Afghanistan.’ Moreover, he emphasised that Pakistan has its sovereign right to close the border for its own security and cannot allow the border to be used as a thoroughfare, pointing towards India’s alleged support to terror groups and its nexus with Afghan intelligence. He also lashed out at the Afghans for resisting proper border management mechanisms recommended by Pakistan.
The situation is indeed spiralling out of control with no end in sight. Although Pakistan has agreed to open the border for just two days this week, it may need to reopen the border permanently in the long-run for another humanitarian crisis cannot be afforded at any cost along the Durand Line. The state has already hosted millions Afghan refugees since the Soviet-Afghan War in the 1980s, leading to many of them acquiring Pakistani citizenship (albeit illegally in some respects).
Afghanistan, largely known as the graveyard of empires, has hardly witnessed peace in its long history and with former Afghan President Hamid Karzai’s refusal to recognise the Durand Line, diplomatic relations are indeed murkier than ever between Islamabad and Kabul. In addition, a senior Pakistan Army official, in an interview with London-based paper The Daily Telegraph, commented that the USA had failed to achieve stability in the region, and asked that it ‘do more’ or else the possibility of Moscow’s intervention was there. These remarks clearly signal the complexity of changing regional power dynamics.
On the other hand, our establishment is worried about India’s role in Afghan territory, its defence and economic investments and provision of alleged support to proxy groups through Afghan intelligence. Our Foreign Office needs to think creatively and present out of box solution to the civil and military leadership. Track II efforts need to be strengthened to bring Kabul and Islamabad together without any set conditions.
The Pakistani government should also convince Kabul to share HUMINT and SIGINT for effective collaboration against the common threat of terrorism. The mistrust between the two sides has been used by India as an opportunity to extend its influence in Afghanistan.
Despite Pakistan’s questionable role in the past pertaining to the Afghan Taliban, it has indeed come a long way in fostering regional connectivity which would benefit Afghanistan’s future. Talks with the Taliban are must for the Afghan Peace Process to end smoothly, and this must be the objective of all involved powers.
No comments: Links to this post

The Pakistan Peoples Party (PPP) rubbished on Thursday reports that it had agreed to a federal government proposal to reestablish military courts for two years.
“PPP has not agreed to the draft legislative proposals prepared by the government for the revival of military courts,” a statement said. Reports in a section of the media about the PPP having agreed are not correct and are contradicted, it added.
“PPP totally and roundly rejects any statement purportedly issued by any official agency creating a false and erroneous impression of the party having agreed to the draft proposals of the government.”
Earlier on Thursday, Finance Minister Ishaq Dar termed a two-year extension in military courts’ tenure imperative to address the issue of terrorism in the country. He hoped that the PPP would accept the government’s decision regarding the duration of military courts.
“It is a national issue which will be resolved with the consensus of all political parties including the PPP,” he said, adding the whole nation wanted to see the country’s leadership united against terrorism. The remarks came following a fresh round between the parliamentary forces in connection with the courts.
Further, Tehreek-e-Insaf (PTI) Vice Chairman Shah Mehmood Qureshi claimed today that the PPP had withdrawn some of its recommendations, saying a consensus was developed in this regard.
On Monday, PPP co-Chairman Asif Ali Zardari said they were not against military courts, but have advised extension in their tenure for a year. “We are carrying out consultations on the issue,” he added.
The military courts were established through the 21st Constitutional Amendment after the December 2014 attack on Army Public School in Peshawar which left 150 people, mostly children, dead.
No comments: Links to this post

Jalo Ram, Kumari’s brother said his sister was killed for no reason by “influential people” of the area. He appealed to the police to take action against the killers and provide security to his family.

A Hindu woman has been axed to death by a group of unidentified persons in Pakistan’s restive southwestern Balochistan province, a media report said.
Zania Kumari, was attacked on Wednesday by the group in Baba Kot area of Nasirabad district and escaped after the murder, police was quoted as saying by the Dawn.
The cause of the attack remains unclear and police have registered a case against the killers, the report said.
Jalo Ram, Kumari’s brother said his sister was killed for no reason by “influential people” of the area. He appealed to the police to take action against the killers and provide security to his family.
http://www.thehindu.com/news/international/hindu-woman-axed-to-death-in-pakistan/article17433273.ece
No comments: Links to this post