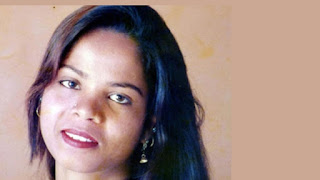 A Pakistani Christian woman who spent eight years on death row over false blasphemy charges has left the country more than six months after she was acquitted by Pakistan's top court.
A Christian woman acquitted of blasphemy after spending eight years on death row in Pakistan has arrived in Canada, a lawyer representing her said.She’s expected to be reunited with her daughters, Pakistani officials and others involved in the case said Wednesday.Asia Bibi was convicted of blasphemy in 2009 after a quarrel with a fellow farmworker. The Supreme Court overturned her conviction last year, and she had been in protective custody since then.Islamic extremists have rioted over the case and threatened to kill her. The same radical Islamists, many of whom have been jailed for their threats, also urged the overthrow of the government following Bibi’s acquittal.Wilson Chawdhry of the British Pakistani Christian Association told The Associated Press that he received a text message from a British diplomat saying “[Asia] is out.” A close friend of Bibi also confirmed that she had left the country, speaking on condition of anonymity for fear of reprisal. Her lawyer, Saif-ul Malook, said she had already arrived in Canada.
Officials at Pakistan’s interior and foreign ministries also confirmed her departure, speaking on condition of anonymity because they were not authorized to brief media.
The case has brought international attention to Pakistan’s controversial blasphemy law, which carries an automatic death penalty. The mere suspicion of blasphemy against Islam is enough to ignite mob lynchings in the country. The accusation of blasphemy has also been used to intimidate religious minorities and to settle scores.
Radical Islamists have made the punishment of blasphemy a major rallying cry, bringing tens of thousands into the streets and paralyzing major cities.
Salman Taseer, the governor of Punjab province, was shot and killed by one of his guards in 2011 for defending Bibi and criticizing the misuse of the blasphemy law. The assassin, Mumtaz Qadri, has been celebrated as a martyr by hard-liners since he was hanged for the killing, with millions visiting a shrine set up for him near Islamabad. Pakistan’s minister for minorities, Shahbaz Bhatti, was assassinated later that year after demanding justice for Bibi.Prime Minister Imran Khan has vowed not to be intimidated by the rioters, saying the rule of law would decide Bibi’s fate. But she was denied permission to leave the country for several months until sentiments cooled.The friend, who last spoke to her on Tuesday, said Bibi and her husband Ashiq Masih had spent the last several weeks getting their documents in order. He said she was longing to see her daughters, with whom she talked to almost daily from her secure location, protected by Pakistani security forces.
Chawdhry said he had been in regular contact with Bibi’s husband throughout the ordeal as well as with several diplomats involved in international efforts to free her and get her to safety.
A three-judge Supreme Court panel in January cleared Bibi’s final legal hurdle when they ruled there was no compelling reason to overturn the court’s earlier acquittal. The judges accused those who charged Bibi with blasphemy of committing perjury, but said they would not be tried because of the sensitivity of the case. The judges upheld the blasphemy law.

ThePrint looks at the significance of Lahore’s Data Darbar shrine and why Pakistani Taliban has targeted it twice, apart from issuing threats.

Lahore’s Data Darbar is the largest Sufi shrine in all of South Asia. It was built in 11th century to house the remains of Sufi Muslim saint Abul Hassan Ali Hujwiri, who is commonly known as Data Ganj Baksh. Hujwiri is believed to have lived here at some point during the 11th century.
The shrine had humble beginnings. It was a simple grave, next to a mosque until the 13th century, when the idea that Hujwiri had special spiritual powers became popular, leading to its expansion. It was further expanded in the 19th century as it went on to become South Asia’s largest shrine.
The Sufi nature of Data Darbar has often led to the Pakistani Taliban targeting the shrine. The Pakistani Taliban considers Sufis to be heretics.
Groups such as the Pakistani Taliban and the Lashkar-e-Jhangvi accuse Sufis of being polytheistic, a highly disputed claim. Polytheism — worshiping other Gods than just the singular Allah — is considered a sin among most schools of Islam.
In the case of Data Darbar, its Sufi devotees are accused of worshiping Hujwiri, which amounts to practicing polytheism. Extremists also tend to look at Sufi shrines and saints as idols. Thus, groups like the Pakistani Taliban accuse worshipers at Data Darbar to be indulging in idolatry.
As is prominent among Sufi practices, the Data Darbar shrine is popular for hosting colourful festivals, where devotees often dance. Extremist groups like Taliban also consider dance and music to be un-Islamic.
Moreover, one of the most frequent visitors to this shrine are supporters of the Barelvi movement. Although, Barelvis are distinct from Sufis, they adhere to a lot of practices of the Sufi school.
Data Darbar is not the only Sufi shrine to be targeted by the Pakistani Taliban. Back in 2009, terrorists from Pakistani Taliban targeted the shrines of Sufi poet Rahman Baba (in Peshawar) and Sufi cleric Sarfraz Ahmed Naeemi (in Lahore). Although given the highly venerated stature of Data Darbar, attacking it would be seen a big symbolic victory by violent extremist groups.
No comments: Links to this post 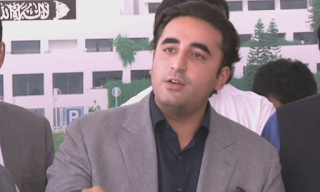 PPP Chairperson Bilawal Bhutto-Zardari on Wednesday criticised the government over the recent appointments of economic adviser, State Bank of Pakistan's (SBP) governor and Federal Board of Revenue's chairperson, questioning if the decisions were made on the dictation of the International Monetary Fund (IMF).
Speaking to reporters outside the National Assembly, Bilawal said that the government had offered no explanation for the sudden changes. The PPP chairperson said that Prime Minister Imran Khan had appointed Hafeez Shaikh — who was finance minister from 2010-13 when PPP was in government — as the economic adviser "without even meeting him" and claimed that no one, including the premier, knew the reasons behind the change.
He specifically raised questions over the appointment of Dr Reza Baqir — an IMF economist — as SBP governor and asked: "How can IMF negotiate with IMF?"
"All of a sudden [after Shaikh's appointment], SBP and FBR heads are shown the door. The person appointed as SBP governor was previously receiving his salary from the IMF [...] no matter how good or bad [Baqir] is, there will be suspicion as to whether IMF is taking these decisions."
Bilawal admitted that PPP too had sought a deal from the IMF but insisted that his party had "never compromised on Pakistan's financial rights". He said that the PPP had started a "revolutionary programme" — the Benazir Income Support Programme — that created jobs, and raised salaries and pensions of government employees.
He criticised the government for "usurping the rights of labour unions" and warned that if the government fails to improve the economic situation of the country, opposition will be forced to protest inside and outside the parliament. He added that political instability in the country had led to economic instability.
PML-N decision 'not final'
In response to a question regarding PML-N's decision to change the Public Accounts Committee (PAC) chairperson, Bilawal said that the PPP had not been taken into confidence."They [PML-N] might not have had a chance," he said. "But yesterday one of their members said in the assembly that the decision was not final."
In a shocking move, the PML-N had last week announced that Shahbaz Sharif, who is Leader of the Opposition in the National Assembly, had stepped down as PAC chairperson and the party had nominated Rana Tanvir in his stead. Though the PML-N insisted that PPP had been taken into confidence, the latter said that the decision was "one-sided". "We are surprised at the decision," PPP's Shazia Marri had said. "Bilawal Bhutto-Zardari was present in the parliament. He was not informed and neither were the PAC members."
The announcement had attracted criticism from the Pakistan Tehreek-i-Insaf as well, that recalled that Sharif had been appointed as PAC chairperson after a five-month deadlock as the ruling party was reluctant to give chairmanship of this vital parliamentary committee to the opposition leader contrary to the traditional practice. The PML-N had refused to nominate another member from the party to head the PAC, arguing that according to parliamentary tradition, the leader of the opposition should become chairman of this committee.
In his conversation with reporters today, Bilawal said that it had been decided in the Charter of Democracy that the opposition leader would be PAC chairperson so that the accountability process would be transparent and insisted that the practice should be upheld. https://www.dawn.com/news/1481038/how-can-imf-negotiate-with-imf-bilawal-criticises-reza-baqirs-appointment-as-sbp-governor
No comments: Links to this post 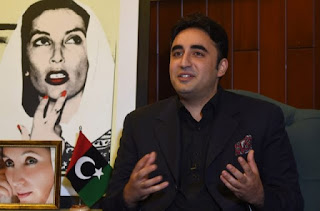 Pakistan People’s Party (PPP) Chairman Bilawal Bhutto-Zardari has said that the struggle against extremism will continue till the last victory.
He stated this in his statement on the occasion of the death anniversary of PPP leader from Khyber Pakhtunkhwa (KP) Zahir Shah who was martyred during PPP’s 2013 election campaign.
Bilawal Bhutto said that Benazir Bhutto always stood up to extremism and terror as they were and still remain the worst menace of the society. Shaheed Zahir Shah combated those who spread terror with guns and waved the flag of PPP, he added.
He said that terrorists first tried to create hurdles for PPP in the elections and later resorted to the mass killing of children in APS.
The Chairman PPP asked the youth, students, women and elders to join PPP so that we can defeat extremism and terrorism together and establish a progressive and democratic society.
https://www.pakistantoday.com.pk/2019/05/07/bilawal-bhutto-vows-to-fight-extremism-till-end/
No comments: Links to this post

A bomb targeting Pakistani police outside a Sufi shrine in the city of Lahore on Wednesday killed nine people, officials said. The blast, a day after the beginning of the Muslim holy month of Ramadan, went off at a police checkpoint near the Data Darbar, one of the largest Muslim shrines in South Asia. “Police was the prime target in this attack. We are collecting forensic evidences to ascertain the nature of the blast,” said Ashfaq Khan, deputy inspector general of police operations in Lahore, adding that nine people were killed and 24 wounded. Muhammad Farooq, a spokesman for the city’s rescue services, said at least seven of the wounded were in critical condition.Police set up checkpoints on main roads leading to the shrine and hospitals were placed on alert, officials said.The attack was claimed by the Hizbul Ahrar, a splinter group of the Pakistani Taliban, who said they were targeting the police.“This attack was carried out at a time when there were no civilians near the police,” a spokesman for the militant group, Abdul Aziz Yousafzai, said in a statement. The Pakistani Taliban have been fighting the government for years. Sufis, who follow a mystical form of Islam that has been practiced in South Asia for centuries, have been regularly attacked by hardline Sunni Muslim militants in the past. In 2010, two suicide bombers struck the Data Darbar shrine killing 42 people and wounding 175, in an attack officials said was carried out by the Pakistani Taliban. Militant violence has since declined sharply in Pakistan following a sustained crackdown in recent years. Over the past two years Lahore, Pakistan’s second largest city, has been free of the kind of attacks that were once common. However, officials warned that the attack showed the need for vigilance during Ramadan. “People should remain aware of their surroundings when going to pray,” said a Punjab provincial minister, Mian Aslam. Police said a general security alert was in force but there had been no specific warning about a threat to the Data Darbar, which attracts large numbers of visitors. https://www.reuters.com/article/us-pakistan-blast/blast-near-shrine-in-pakistan-nine-dead-police-idUSKCN1SE0C2
No comments: Links to this post