Khushdil Khan said that female education was the need of the hour and the country’s development was not possible sans female development.
No comments: Links to this post 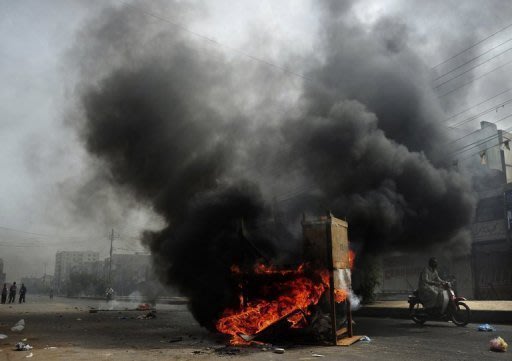 Pakistan announced on Saturday its troops had taken back areas of Karachi occupied by armed groups and arrested more than 100 people after political violence across the vast port city claimed 95 lives. 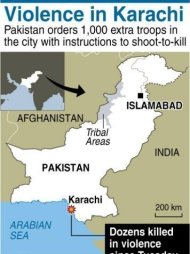 Four days of unrest has been blamed on political and ethnic tensions, with gunmen firing on two buses in the early hours of Friday, killing 12 people including a six-year-old girl, according to security officials.

"Our paramilitary soldiers have secured the troubled localities and hills where armed terrorists were firing on innocent people, and have restored normal life," interior minister Rehman Malik told reporters.

"We'll treat anyone who disrupts Pakistan's financial capital as a supporter of Taliban and an enemy operating against our war on terror," he said.

"More than 100 suspects, many of them with weapons, have been arrested," Memon said, putting the death toll at 95.

Authorities said they had asked residents evacuated as the violence broke out to return home but few had responded.

"I had left my house in Qasba on Tuesday for my workplace, but could only return home now when peace has returned after four days," Abdullah Khan, 33, said.

"I am a construction labourer and support my elderly parents, wife and six children. I am happy to see my family safe but we don't know when the situation will turn difficult again."

Police and hospital officials confirmed the toll and arrests.

"We have taken control of all the affected areas," said Farooq Bilal, a spokesman for the paramilitary Rangers.

"Unknown motorcyclists threw a grenade on some shopkeepers who were trying to open their shops in Bhimpura, killing two and injuring three others," police official Mohammad Rafiq said.

Gunfire could be heard in western neighbourhoods and hospitals were still receiving casualties, witnesses said.

The violence has been blamed on loyalists of the Muttahida Qaumi Movement (MQM), the dominant local party that represents migrants from India, and the Awami National Party (ANP) of Pashtuns from the northwest.

The latest bout of killings comes days after the MQM walked out of the federal government led by the Pakistan People's Party (PPP), a move which some analysts said made it harder for the government to intervene.

The worst affected areas are impoverished, heavily populated neighbourhoods in western Karachi, dotted with construction sites where armed men of different ethnicities have exchanged gunfire.
No comments: Links to this post

EDITORIAL:Daily Times
For the fourth day running, Karachi remained in the grip of large scale ethnic bloodletting on Thursday. Although at the time of writing these lines the city by and large appeared deserted since markets did not open and transport was off the roads on MQM’s declared day of mourning on Friday, in the troubled areas coinciding with the well known ethnic fault lines that run through the metropolis, the sound of gunfire was almost a constant. The toll of this virtual mini-civil war is rising, with widespread dissatisfaction being voiced by Karachi’s affected citizens that the government and law enforcement agencies are conspicuous by their absence. The gunmen have abandoned individual targeted killings that had been the bane of the city even before the parting of the ways of the MQM and the PPP-led coalition and instead taken to ‘positional’ warfare and indiscriminate killings of innocent citizens on buses and even within their houses. In the absence of any meaningful response by the law enforcement agencies to halt this unfettered massacre, Karachi too is witnessing its own version of internally displaced persons (IDPs) in the shape of desperate citizens being forced to abandon their homes and flee to safer areas with the minimum wherewithal to survive. For all intents and purposes, in the areas of intense fighting by means of their menacing presence, and in the rest of the city because of spreading fear, the gunmen rule the roost. It would come as no surprise if within their ranks could be counted land and drug mafias trying to take advantage of the unrest.

MQM’s day of mourning on Friday remained just that, mourning for the city of lights and the dire straits to which it has been condemned. Mercifully, the MQM postponed its planned march, which could have invited more trouble. Nevertheless, as we have said before in this space, the MQM, since leaving the government, has resorted to its time-tested usual terrorist-political tactics. It is difficult to believe that its hand is not detectable in the worst violence to wrack the city for years. That does not mean that there are not other actors who are equally to blame for the descent into open warfare along ethnic lines. The Urdu-speaking and Pashtun people of Karachi are the worst affected communities. The apprehension now is that the concentration of the violence in north-western Karachi may spill over into the rest of the city with a vengeance.

The government claims 235 perpetrators of violence arrested in the last four days. This is the result of a conscious decision not to launch a generalised operation a la the military offensive in 1992, which failed to leave any indelible mark on the circumstances of the city, but instead to gather intelligence and information and then conduct targeted operations against the miscreants. According to Federal Law Minister Maula Bux Chandio, an army action in Karachi would mean the collective failure of the political forces to manage the affairs of the country satisfactorily. He could also have added that it could pose a threat to the continuation of civilian rule once again. While Interior Minister Rehman Malik has once more dashed to Karachi to help out, promising the induction of 1,000 personnel of the Frontier Constabulary to bolster the police and Rangers in the city, the Sindh government has issued shoot on sight orders to quell the violence.

Prime Minister Yousaf Raza Gilani has appealed for calm and peace in Karachi, but his voice sounds more like a plaint than that of an authoritative chief executive, punctuated as the appeal is by the crackle of almost constant gunfire in the streets and alleyways of many areas of the city. In essence, the PPP’s strategy after the 2008 elections to “keep your friends close, and your enemies even closer” seems to have now run its course. It is MQM’s well known and demonstrated track record that it always resorts to the gun when it wants to dictate its own terms to rivals or the power structure. If it is unable to win the day through its habitual tactics of intimidation and at the same time anointing itself as the victim, Karachi is i
No comments: Links to this post

neighbourhoods in Karachi on Friday – the forth day of continuing ethnic violence.

In a late night development, law enforcement agencies cordoned off and entered Kati Pahari area in a bid to quell terrorists after intelligence reports revealed that the Taliban were present there.

During the day, despite the deployment of Frontier Constabulary (FC), tension gripped various localities in the city’s west where gunfire reverberated and thousands of people stood stranded, short of food and too frightened to leave their houses. Relatives wept over the bodies of loved ones in morgues and hospitals on Friday. As per reports, four rockets were fired in Saeedabad and Baldia areas while unidentified attackers ridding motorbikes lobbed hand grenades at a building in Bhimpura area. One unidentified man, Hussain, Ghanchi and Maojee were killed when the attackers opened indiscriminate firing.

In Pirabad area, one Saifullah was shot dead while firing claimed the life of one Sakhiur Rehman in Qasba Colony. A passer-by, Ghaniur Rehman, was killed in another similar incident.

In Qasba area, one Akbar was shot dead while firing near Mubarak Mosque killed 19-year-old Usman and wounded Yumna, Rehan, Zaghfaran. A man, Yousuf Jinnah, was killed outside his house. In Orangi Town, Arshad Khan was mowed down while firing near a bakery in Iqbal Market killed one Iqbal and wounded his uncle Qadar. A passer-by, Rafiullah, was killed due to the firing in the limits of Sharah-e-Noor Jahan police. In North Nazimabad, one Arif Ibrahim lost his life because of unbridled firing.

In the limits of Kharadar police, Noor Muhammad got killed. A watchman, namely Abdul Qayyum, was shot dead by unidentified assailants near Bombay Bazaar. Near Miani Market, Fazlur Rehman, 28, was shot dead.

In Saeedabad area, Ayub Masih, Bismillah Khan and an unidentified man were gunned down. Twelve-year-old Shahabad received bullets at his house and later died. In the same area, Ahsan Rashid was killed.

In Nazimabad, 7-year-old Salman Siddique was shot dead. A mutilated dead body was recovered from Old Golimar area. In Aligarh Bazaar, unidentified arsonists torched a two-storey building while three shops were also set ablaze. Seven more shops and over a dozen vehicles were set on fire in various localities of the city. In a late night firing incident, Abdul Jabbar and Mir Afridi were killed in Ghousia Colony. A Jamaat-e-Islami activist, Ayub Ali, was ambushed in Lines Area. He died instantly. One passenger was killed and five others were wounded when unidentified men fired indiscriminately at a passenger bus near Hassan Square.

A dead body was recovered near Lea Market. The body is yet to be identified. Two more mutilated bodies were found in Baldia Town.
No comments: Links to this post