Pakistan President Asif Ali Zardari was being treated in a Dubai hospital Wednesday after complaining of chest and arm pains, officials said, denying rumors that the embattled and unpopular leader may be stepping down.

Some reports said Zardari, who in September underwent medical tests for his heart in Britain, may have suffered a mild heart attack.

In London, Pakistan's High Commissioner to Britain, Wajid Shamsul Hasan said he spoke over the telephone to the 56-year-old leader on Tuesday night in Dubai and to his family members at the hospital on Wednesday.

Hasan told The Associated Press the doctors in the UAE confirmed Zardari has a heart condition, known as angina, but it wasn't clear yet whether he had suffered a heart attack.

"Whatever the case, he has no immediate plans to step down," Hasan said.

News that he had traveled to Dubai provoked speculation in Pakistan's febrile media and political world that Zardari may use ill health as a pretext for stepping down under pressure from the country's powerful military.

An article published Tuesday on the website of Foreign Policy magazine appeared to be the main source of the rumor that was spread via Twitter and Pakistani television news channels.

The president has been under fresh pressure recently since the Pakistani ambassador to the U.S., a key ally, was forced to resign after allegations he sent a memo to Washington asking for its help in reigning in the military. Military coups, and rumors of them, have long been a regular feature of political life in Pakistan.

Zardari, a canny political operator with many enemies in the media and political elite, has survived several predictions of his downfall since he became president in 2008.

The Foreign Policy magazine quoted an unnamed former U.S. government official as saying Zardari was "incoherent" when he spoke with President Barack Obama by telephone over the weekend. Parts of the U.S. government were informed that Zardari had a "minor heart attack" on Monday night and may resign on account of "ill health" amid the uproar over the memo scandal, said the official.

"All these reports are untrue, imaginary and speculative," said his spokesman, Farhatullah Babar, adding the president's condition was "not serious, not dangerous" and he would return to Pakistan soon.

Hasan said that Zardari also suffered from diabetes and ulcers and that doctors were consulting on whether he may need follow-up care.

Zardari traveled to Dubai on Tuesday following symptoms "related to his pre-existing heart condition" after his children insisted he do so, Pakistani Prime Minister Yousuf Raza Gilani's office said in a statement. The statement said Zardari was "stable" and would "remain under observation and return to resume his normal functions as advised by the doctors."

In September, Zardari underwent an angiography — a medical imaging technique used to visualize the blood vessels of the heart — and some routine medical tests at London's Royal Brompton Hospital and was reported to have received a clean bill of health.
No comments: Links to this post

Syrian President Bashar al-Assad defiantly denied any suggestion that he has ordered a bloody crackdown against protesters who are demanding that he resign, and claims instead that most of the people who died in the unrest were his supporters and troops.
Assad, whose regime has been condemned by the West, the Arab League and former allies, dismissed suggestions that he step down and scoffed at sanctions being imposed on Syria.

His defiant stance was on display in an exclusive interview with ABC News' Barbara Walters who confronted the Syrian dictator in Damascus with stories and evidence of civilians being tortured and killed, some of them children.

"People went from house to house. Children were arrested. I saw those pictures," Walters said to Assad.

"To be frank with you, Barbara, I don't believe you," Assad said.

Walters asked Assad about the case of Hamza al-Khateeb, a 13-year-old boy detained by Syrian forces after a protest whose lifeless body was returned to his parents shot, burned and castrated. The boy's death galvanized protesters, and photos on the internet inflamed world opinion. Assad denied the boy had been tortured. "No, no, no. It's not news," he insisted. "I met with his father, the father of that child and he said that he wasn't tortured as he appeared in the media."
The tide of pro-democracy protests sweeping the Arab world reached Syria in mid-March and news of violent clashes between protesters and government agents have leaked out of this tightly controlled dictatorship and on to the Internet. The bodies of the dead, some of them children, have been found bearing the marks of torture.

According to a United Nations report released last week, more than 4,000 people have been killed and the country is embroiled in an undeclared civil war, an assessment Assad dismissed with the question, "Who said that the United Nations is a credible institution?"

In an unprecedented condemnation of a fellow Muslim nation, the Arab League recently threatened sanctions, and last month one-time ally Turkey called on Assad to resign the presidency, an office he's held since 2000.

In his interview with Walters, his first sit down with an American journalist since the protests began, Assad denied he ordered a crackdown and blamed the violence on criminals, religious extremists and terrorists sympathetic to al Qaeda he claims are mixed in with peaceful demonstrators.

He said the victims of the street violence were not civilians protesters battling decades of one-party rule, he insisted.

"Most of the people that have been killed are supporters of the government, not the vice versa," he said. The dead have included 1,100 soldiers and police, he said.

Assad conceded only that some members of his armed forces went too far, but claims they were punished for their actions.

"Every 'brute reaction' was by an individual, not by an institution, that's what you have to know," he said. "There is a difference between having a policy to crackdown and between having some mistakes committed by some officials. There is a big difference," said Assad.

"But you have to give the order," countered Walters.

"We don't kill our people… no government in the world kills its people, unless it's led by a crazy person," Assad said.

At another point he said, "There was no command to kill or be brutal."

In an echo of recently deposed Arab strongmen, Assad said he was introducing reforms and elections, starting with local elections this year. The vote on his presidency isn't scheduled until 2014, a wait that may be too long for Syrian dissidents. But the elections can't be rushed, Assad said.

"We never said we are democratic country… We are moving forward in reforms, especially in the last nine months… It takes a long time, it takes a lot of maturity to be full fledged democracy."

Assad said the threat of sanctions did not worry him. "We've been under sanctions for the last 30, 35 years. It's not something new."

Despite the decades of economic sanctions, "We're not isolated. You have people coming and going, you have trade, you have everything," he said.

Walters asked Assad if he regretted the violence that has wracked his country, left thousands dead and make Syria a pariah state. 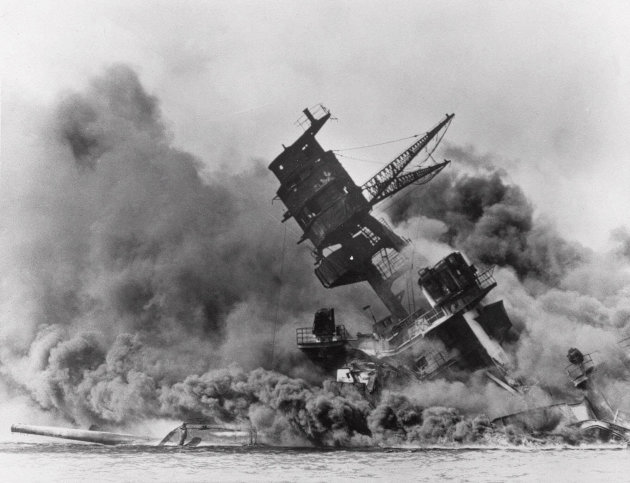 The Dec. 7, 1941, bombing of Pearl Harbor and those who lost their lives that day are being remembered Wednesday on the 70th anniversary of the Japanese attack that brought the U.S. into World War II.

About 120 survivors will join Navy Secretary Ray Mabus, military leaders and civilians to observe a moment of silence in Pearl Harbor at 7:55 a.m. Hawaii time — the moment the attack began seven decades ago.

About 3,000 people are expected to attend the event held each year at a site overlooking the sunken USS Arizona and the white memorial that straddles the battleship.

The Pearl Harbor-based guided missile destroyer USS Chung-Hoon will render honors to the Arizona and blow its whistle at the start of a moment of silence at 7:55 a.m. — the same time 70 years ago the first Japanese planes began to attack.

F-22 jets flown by the Hawaii National Guard are due to soar overhead in a missing man formation to finish the moment of silence.

Mal Middlesworth, a Marine veteran who was on the USS San Francisco during the bombing, will deliver the keynote address.

"Their tenacity helped define the Greatest Generation and their valor fortified all who served during World War II. As a nation, we look to December 7, 1941, to draw strength from the example set by these patriots and to honor all who have sacrificed for our freedoms," he said.

Also this week, five ash scattering and interment ceremonies are being held for five survivors whose cremated remains are returning to Pearl Harbor after their deaths.

On Tuesday, an urn containing the ashes of Lee Soucy was placed on his battleship, the USS Utah, which is lying on its side near the place where it sank 70 years ago. The ashes of Vernon Olsen, who was on the Arizona during the attack, will be placed on his ship late Wednesday.

The U.S. lost 12 vessels that day, but the Arizona and the Utah are the only ones still sitting in the harbor. The ashes of three others are being scattered in the water in separate ceremonies this week.
No comments: Links to this post

have denied media reports about him resigning on account of ill health and said he is expected to return after routine medical checkup.
A US magazine claimed that President Zardari is under extreme pressure over the Memogate scandal and has been hospitalized in Dubai for medical checkups, complaining of heartache.

The sources term magazine news baseless and fabricated.
No comments: Links to this post