Video Report - #Coronavirus #UnitedStates - Can the coronavirus #pandemic be stopped?

In Afghanistan, a new ‘great game’ with ISIS, ISK and Pakistan is on with a vengeance

To understand Pakistan’s undoubtedly brilliant strategy in Afghanistan, the West only needs to study Kashmir without the usual self-limiting blinkers.

Just days after a hugely publicised US-Taliban ‘peace’ deal, renewed violence ripped through Afghanistan —  76 attacks across 24 provinces — as the Taliban lifted its week-long commitment on ‘reduction of violence’. The Islamic State in Afghanistan claimed responsibility for two of these attacks, while the Taliban — as has been the case earlier — denied all involvement. Amid all this violence, Kabul and Herat witnessed sporadic anti-India protests, in development that both surprising and unprecedented.  Clearly, a ‘great game’ of local proportions seems to be back with a vengeance. The country has also witnessed protests against Pakistan.

The ISIS in Afghanistan

Some aspects of the new game is apparent in the attacks claimed by the Islamic State (IS). In Afghanistan, the ISIS is represented by the Islamic State in Khorasan (ISK), a group that declared allegiance to it in 2015. Claims of attacks on Afghan soil are sometimes made by the ISIS and at other times by the ISK. The attacks last week, identical to the one in July 2019, was carried out by a Tajik and an unidentified foreign fighter, which fits in well with the ISIS’s Salafi and Takfiri beliefs. Takfir is the practice by which a Muslim may declare another as an apostate, and dates back to at least the 7th century. This was revived by Muhammad Ibn Abd al -Wahab, founder of Wahabism in Saudi Arabia, who encouraged the stringent Salafist beliefs, and the excommunication of those who did not abide by their beliefs. In later years, takfir was used to justify violence against fellow Muslims, particularly those in power.
But unlike the ISIS, the ISK is a creature of many parts, sometimes acting with the Taliban, sometimes violently against it, sometimes prioritising business operations, and at all times, opaque about who it takes orders from. Some aspects of this Janus-faced organisation have been recently detailed in a publication of the Afghan Institute of Strategic Studies (AISS).
The AISS paper paints a picture of a disparate group — largely made up of Pakistani cadres formerly of the Tehrik-e-Taliban Pakistan (TTP). The TTP relocated to Afghanistan after the Pakistan Army carried out operations in its tribal areas sometime in the middle of 2015. Other cadres include some Kashmir-specific groups like Tehreek ul-Mujahideen and various Central Asian divisions.

Between then and 2018, however, the ISK was targeted in unusually precise US operations, indicating the availability of solid ground intelligence. The result was the destruction of its top leadership and some 548 of its commanders.
The original group then evolved into its present amoeba-like formation. One division is active around Kabul and colludes actively with the Taliban. Another is based around the Pak-Afghan border, funding itself by trafficking gems, talc, and timber even as it is violently pitched against the Taliban for control of this lucrative trade. A third group operates in the north, and is largely made up of Central Asian and foreign cadres, who while being ideologically stronger, cooperate in keeping the Pakistan-Central Asia route open. A fourth operates along the Iranian border in Herat, clearly with support from Tehran.

As the AISS report notes, nearly 90 per cent of the group is made up of Pakistanis. It is armed with Pakistani weapons and, barring one incident against the Hazaras in 2019, no longer attacks Pakistan. It has also managed to get a batch of Indian cadres. Intelligence assessments indicate that it had planned a large-scale attack in India, but failed to carry it out.
Both Delhi and the US began to take the ISK very seriously, especially after it announced a Wilayat of Hind, a “province” in India. It’s a different matter that the ISK rather belatedly announced a “province” in Pakistan as well, to which there was no response from Islamabad at all. By the end of 2019, India had negotiated with Kabul for the extradition of Indians serving in the ISK back to their home country.
In a fresh development, a new ISIS digital publication called Sawt ul Hind has emerged. Notably, it carried pictures and stories on the Delhi riots, with the clear aim of inciting Indian Muslims. Earlier, similar publications had largely targeted Kashmiris, using mostly fake videos used to drum up support against India.
There is, however, a curious anomaly between the AISS report and other sources. While the AISS report shows a very poor, almost non-existent link between the ISK and the ISIS, a UN-appointed group reports that the ISK’s leadership was changed as recently as July 2019, after a visit by the ISIS’ core leadership. But one would go with the ground assessment of a fractured group whose loyalties depend on who’s paying it.

The anti-India protests in Herat were led by a prayer leader at a local mosque and come close on the heels of statements made by Iranian leaders, including Ayatollah Khamenei, who have condemned violence against Muslims under the Narendra Modi government’s rule. Given the size of the crowds, some outside encouragement is entirely likely. A smaller protest was reported in Kabul, primarily by Turkish and Pakistani media sources. Added to this heady brew is the ISIS attack that could have killed Afghanistan’s presidential candidate Abdullah Abdullah, a leader known to be sympathetic to India. While New Delhi has only itself to blame for providing prime ammunition to anti-India elements everywhere, Afghans themselves need to take note that Pakistan is again moving to strengthen its hold on Afghanistan, as the US moves out lock, stock, and barrel.
It appears the US intel reports are right. The Taliban have no intention of honouring the peace deal signed with the Americans. Neither does their sponsor Pakistan. As a very wise diplomat recently noted, unlike all the other actors involved in the Afghan drama, which includes Russia, the US, India, Saudi Arabia among others, Pakistan alone has never wavered in its Afghan policy, which is to exert complete domination using multiple groups as balancing levers. To understand its undoubtedly brilliant strategy, Western diplomats only need to study Kashmir without the usual self-limiting blinkers.
No comments: Links to this post

Under the Pakistan Tehreek-e-Insaf (PTI) government, the National Accountability Bureau (NAB) has served the Group Chief Executive and Editor-in-Chief of Jang-Geo Group Mir Shakil-ur-Rahman a notice for an inquiry related to a property allegedly bought illegally from a government entity more than 34 years ago.
The case is malicious and fake and all legal requirements will be fulfilled to expose the same. It is also our moral obligations to inform our readers of the allegations, our defense as well as the possible reason behind this intimidation, which we will do shortly in this space.
The Jang-Geo Group will never compromise on journalistic freedom in bringing facts before its readers and viewers.

Washington, D.C., March 12, 2020 -- Pakistani authorities should immediately release Mir Shakil-ur-Rehman, the CEO, owner, and editor-in-chief of the Jang Media Group, the Committee to Protect Journalists said today.
Pakistan’s National Accountability Bureau arrested Shakil-ur-Rehman today over a case involving allegations that he illegally leased land in 1986, according to news reports. Jang Media Group owns Pakistan’s largest TV news channel, the Urdu-language GEO News, and several prominent newspapers, include the Urdu Daily Jang and the English The News International.
“Pakistan’s National Accountability Bureau should immediately release Mir Shakil-ur-Rehman and drop the obviously drummed-up case against him,” said Steven Butler, CPJ’s Asia program coordinator. “This arrest over a 34-year-old land deal makes a mockery of Pakistan’s claim to be a democracy that upholds freedom of the press.”
A Jang Media Group spokesperson told The News International that the National Accountability Bureau had threatened reporters, producers, and editors over the media group’s coverage of the bureau, and had threatened to use the country’s media regulator to shut down its broadcast channels.
CPJ emailed the National Accountability Bureau for comment but did not immediately receive a response.
https://cpj.org/2020/03/cpj-demands-pakistan-release-jang-media-group-ceo-.php
No comments: Links to this post 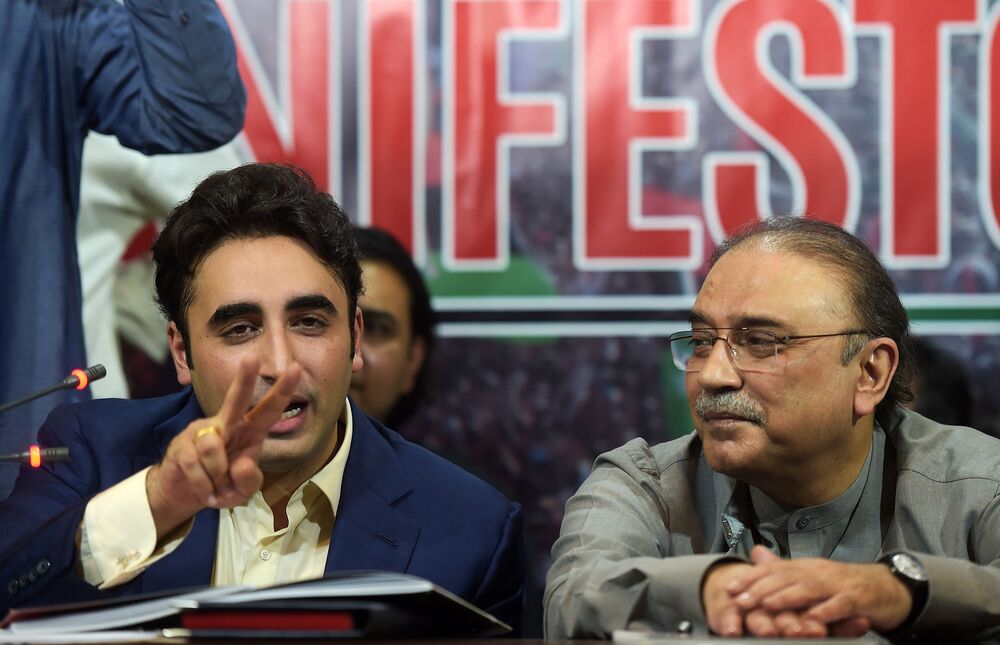 The allegations against the Jang Group CEO are related to a property allegedly bought illegally by him from a government entity more than 34 years ago. The property, in fact, was bought from a private party and all evidence of this was provided to NAB including the legal requirements that were fulfilled such as the payment of duty and taxes.
Bilawal's spokesperson, Senator Mustafa Nawaz Khokhar said, "We have been pointing out NAB's attitude of exacting political revenge since day one," he said. "Imran Khan is using NAB to target people he does not like."
He said that NAB arresting the Editor-in-Chief of the largest media group in Pakistan was an attack on freedom of the press. He said that the prime minister was trying to snatch away people's freedom of expression through threats and coercion.
Khokhar demanded the immediate release of Mir Shakil-ur-Rehman.

The NAB has become a weapon of political engineering, former president Asif Ali Zardari said, while condemning Rehman's arrest.
"Selected leaders are cowards and have small minds," Zardari said, adding: "Attack on free media is a move that weakens democracy."

President CPNE (Council of Pakistan Newspaper Editors) Arif Nizami expresses great concern that a senior and prominent member of the editors and publishers’ fraternity, Rahman, was arrested in Lahore by the NAB at its premises where he appeared for the second time to answer the accountability watchdog’s queries regarding a property that he purchased 34 years ago.
"For the NAB to arrest Mr Rahman at this initial stage of the investigation is uncalled for and is another example of what the Islamabad High Court observed last week about NAB’s practice of arresting individuals without enough proof only to cause harm to their reputations," the president said in a statement.
"In a media environment where there is rampant self-censorship fueled by the threat of advertisement curtailment coupled with broadcast and circulation disruption, this arrest will be viewed as an extension to the government’s regressive and unconstitutional media policy," he said.
"While it is up to the courts to decide on the merits of the case, the manner in which this arrest has taken place paints a bleak picture of the future of media freedom in the country," he added.
https://www.thenews.com.pk/latest/628109-bilawal-shehbaz-condemn-jang-groupgeo-editor-in-chief-mir-shakil-ur-rehmans-arrest
No comments: Links to this post