China’s Strange Offer To Mediate Between India And Pakistan – OpEd


Like the devil quoting scripture, China has said that it hopes that India and Pakistan can jointly stay committed to regional peace and development.
Many would wonder as to whether China has the credentials to make such statement and observation, since China itsef has disputes with several neighboring countries like India, Philippines, Japan, and Vietnam.
There is widespread apprehension among China’s neighbors that China has expansionist ambitions, which is clearly evident from the fact that China forcefully occupied Tibet and is now controlling this nation for over sixty years. No one can forget the fact that Chinese government mercilessly used force and carried out aggression in Tibet, making the Dalai Lama flee Tibet along with several Tibetans. Now, thousands of Tibetans are living as refugees and migrants in different countries in the world, longing for a day when Tibet would become a free country once again and they can go back to their motherland.
China is now claiming large Indian territory and even says that Indian province Arunachal Pradesh should be part of China. China is also occupying considerable part of Kashmir, which is the disputed territory between Pakistan and India and this area has been “gifted to China” by Pakistan.
It is well known that China is driving several Asian countries like Sri Lanka, Pakistan, Bangladesh, Nepal into debt trap by extending huge loan and in the process, it is taking strangle hold over the economy of these nations.
The fact that Sri Lanka has to hand over Hambantota port to Chinese company as Sri Lanka has become a victim of debt trap with China, clearly indicates China’s intentions and ambitious target to over power the other Asian countries by using it’s economic and military power.
The Economic Corridor Project in Pakistan being executed by Chinese companies and Chinese government has already driven Pakistan into a serious debt trap crisis with China. Now, many Pakistanis themselves have apprehension whether Pakistan can get itself relieved from such “China’s hug” in the foreseeable future.
China is now creating serious friction in its relations with India by entering Doklam region and India has vehemently protested and warned China against this move.
The question is whether China has the credentials to act as a mediator to foster peaceful relationship with India and Pakistan.
China’s offer to mediate between India and Pakistan reminds one about the famous panchatantra folk tale ( an ancient Indian collection of interrelated animal fables ) “Two cats and a monkey”.

The story of two cats and a monkey

Once two cats were fighting over a slice of bread and a clever monkey which was sitting on a tree nearby saw them. The monkey volunteered to help them by dividing the bread equally.
The monkey got a pair of scales and broke the slice of bread into two parts and weighed them. But one part of the slice was bigger. The monkey said it would make it equal, so it took a bite out of it. Now this part became smaller.
Again, it took a bite of the bigger part and that became smaller. It continued taking bites of the two parts, till only a very small portion was left.
By the time the cats realized that the major portion of the bread slice had been eaten by the monkey, the shrewd and merciless monkey replied, “This is my fee for sorting out the problem.” Saying this, it gobbled up the remaining piece of bread.
No comments: Links to this post 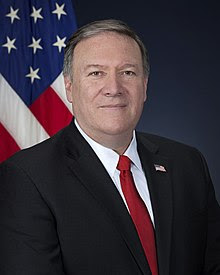 US Secretary of State Mike Pompeo pressed new Pakistani Prime Minister Imran Khan in a phone call to take "decisive action" against "terrorists" operating in Pakistan, the State Department said on Thursday (Aug 23).
Pompeo wished Khan success in the wake of his being sworn in as prime minister in Islamabad Saturday following victory in Jul 25's elections, said State Department spokeswoman Heather Nauert.
"Secretary Pompeo expressed his willingness to work with the new government towards a productive bilateral relationship," Nauert said in a statement.
He also "raised the importance of Pakistan taking decisive action against all terrorists operating in Pakistan and its vital role in promoting the Afghan peace process."
Pakistan's Foreign Office Spokesman Mohammad Faisal denied in a tweet that the issue of terrorism had been discussed at all.
"Pakistan takes exception to the factually incorrect statement issued by US State Dept on today's phone call btwn PM Khan & Sec Pompeo," he wrote.
"There was no mention at all in the conversation about terrorists operating in Pakistan."
But Nauert later stuck by her original statement.
Washington has pressured Pakistan for years to crack down on the branches of the Taliban and the notorious Haqqani network operating in the country, both of which have been designated as terror groups by the United States.
Ties with the US cooled in January when President Donald Trump accused Pakistan of "lies" and "duplicity" in the war on terror, suspending military assistance worth hundreds of millions of dollars.
Khan has raised concerns that he will remain tolerant of the groups, willing to hold talks with the militants and having sought support in the election from religious hardliners.
Before the election he repeatedly blamed Pakistan's participation in the US-led anti-terror campaign for the surge in terrorism on home soil over the last decade.
Read more at https://www.channelnewsasia.com/news/asia/pompeo-calls-on-pakistan-s-khan-to-act-against--terrorists--10645860
No comments: Links to this post