Pakistan’s TikTok is sparing none and having fun. Some call it un-Islamic and want a ban.

All work and no TikTok makes Pakistanis’ lives dull. These are the young and the old, the urban and the rural, the sassy new-age revolutionaries of Pakistani TikTok. In the times of curbs on mainstream media in Pakistan, a 15-second video on the social media platform is all it takes to dismantle any social, cultural and political argument.
Breaking the cultural hegemony of how men and women ought to behave, the Pakistani TikToker cares nothing about what the world says. Walking away from the global stereotype of a long-bearded man, he records his video, acting to the voice of a child asking for his favourite food.
In another video, he is seen acting to the voice of a little girl. The refreshing part is that this long-bearded man is just being plain silly and there is just so much comfort in how he takes to each voice-over.
In Pakistan, YouTube was banned between 2012 and 2016 because of the film Innocence of Muslims. Facebook was also banned for two weeks in 2010 because of alleged blasphemous content on pages like ‘Everybody Draw Mohammad Day’. In a land where the spectre of blasphemy charges is always a real and ever-present danger, TikTok has managed to stay safe so far – mostly because the Imran Khan government has its hands full, going after journalists and struggling to suspend some Twitter accounts.
Rural, lower middle-class Pakistanis largely dominate TikTok, but some urban ‘burger crowds’ also inhabit the platform with their tales of urban friendships, romantic troubles and caste jokes. Caste fights are seen when the rich and privileged can’t swallow that a user from an underprivileged background is getting more likes than him. TikTok is a great equaliser.
Not without politics
TikTok is no Facebook, where you want to rub it in about how perfectly happy your life is. TikTok is all about the imperfections. But no creative expression in Pakistan can keep politics away.
The government might have a noose around most TV news channels, but it is exposed rather hilariously on TikTok by naysayers. The TikTokers talk of Imran Khan’s promises of making Naya Pakistan; sometimes they remind the prime minister of how he said he’s not going to beg only to make a U-turn later.
When the prices of petrol go up in Pakistan, TikTok is lit with a donkey cart getting fuel at the station. Taking a jibe at the current state of the government, one user shows Rs 500, Rs 1000 notes to Imran Khan but the PM finally laughs when he is shown Rs 5,000 notes.
The Germany-Japan border gaffe is shot with not-to-miss props, suggesting the possible frame of mind PM Imran Khan was in when he told the world how “Germany and Japan killed millions until after the WWII” when they decided to have joint industries along their “border regions”.
TikTokers are not happy with anyone. One user dances to a song on how the Pakistan Peoples Party killed him with its arrow, then came the lion of the Pakistan Muslim League (Nawaz), and now his skin is being ripped apart by Imran Khan’s Shaukat Khanum hospital.

The light-headed silliness is infectious. When Mehak dances at the Sargodha junction station, you know the setting and the character is real. Or, when the brothers from Karachi dance to Bollywood numbers in their videos, you feel like dancing too.
If Salman Khan has been known throughout his career for going topless, check these men on TikTok who tear out their t-shirts in literally every video. Why would they do that? How can they ruin so many t-shirts? No one cares for these questions as others are following their routine already.
If there is romance, then there is anti-romance as well. Like this nani gets annoyed when asked about romancing; she says, “what am I going to do with romance now, I’m old”. She is so endearing in her utter disdain.
But then if nani doesn’t want to romance, there are other oldies who want to have fun. This duet on Ek pardesi mera dil le gaya is just an insight into the diversity that at least Pakistan TikTok offers.
As entertaining as it is, there are rules too. Sajid Khan from Jhelum district of Punjab was booked for recording a TikTok video with an illegal weapon, a 30-bore pistol, in hand. He was booked for illegal possession of weapon by police.

No jannat for TikTok users?

There are always those who see the activity of TikTokers as un-Islamic. Protesters have charged that by being on TikTok, the youth were ruining their afterlife, in jannat obviously. And then there are those who want to get TikTok banned because too much fun can spoil a perfectly disciplined society. In January, a man from Nowshera district lodged a complaint with the authorities demanding that the government should ban TikTok as he saw it as a “social ill” for Pakistan.
Till it is banned, like in the past YouTube and Facebook were, Pakistan TikTok continues to democratise every discourse and continues to gather thousands of views with new set of influencers.
No comments: Links to this post 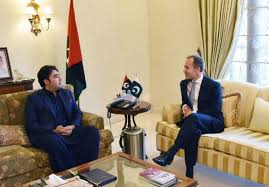 US pressed Pakistan on FATF compliance during Imran Khan’s visit

The United States had repeatedly pressed visiting Prime Minister Imran Khan and his delegation, which included the powerful army chief and the ISI boss, on compliance with counter-terrorism commitments that Pakistan has given to an international body that monitors and combats financing of terrorism. Pakistan’s obligations to the Financial Action Task Force (FATF), the Paris-based body, as part of an ongoing discussion, was raised with Khan and his delegation at their meeting with US President Donald Trump at the White House and at a separate meeting with Secretary of States Mike Pompeo, a senior state department official told reporters Wednesday, revealing for the first time the depth and granular details of the counter-terrorism discussion. Khan’s delegation included among others General Qamar Javed Bajwa, chief of army staff who is often considered the real power center in Pakistan, and Lieutenant General Faiz Hameed, the newly appointed head of the Inter-Services Intelligence that has been long accused of running and supporting terrorist groups operating in India and Afghanistan. “At the White House meeting, the two sides also discussed the Financial Action Task Force, which was the subject the secretary also discussed at length with Prime Minister Khan and the chief of staff Bajwa,” the official said, and added, when asked if everyone on the Pakistani delegation including the ISI chief was on board, the United States “heard a consistent common message from the Pakistan delegation”. The 38-member FATF, which coordinates its work with the International Monetary Fund that recently agreed to advance another bailout package to Pakistan, has put Pakistan on a “grey list” of countries with “strategic deficiencies” to combat money laundering and terror financing and is working with them to address those issues, according to a plan endorsed by the Khan government. But its progress was found inadequate at the monitoring agency’s plenary in June, and it is in imminent danger of being relegated to the “black list” of more egregious offenders such as North Korea, if it is still non-compliant by October. While the Afghan peace process and Pakistan’s potential role in advancing it using its leverage with the Taliban was the chief purpose of President Donald Trump inviting and meeting Prime Minister Khan, counter-terrorism was next, according to the order in which the official listed out the subjects discussed by the two sides. Bilateral trade, which stands at around a paltry $6 billion, and other aspects of their ties followed. The United States has pressed Pakistan for “sustained”, “meaningful”, “verifiable” and “irreversible” action against terrorism for years. The Trump administration dialed it up considerably, backed by bipartisan congressional support, and suspended millions of dollars in security aid. There was no discussion about the resumption of that aid at any of the meetings — and to Khan’s credit he did not ask for it, as he had promised to the diaspora the night before his White House meetings. But the underlying reason for it — Pakistan’s reluctance to get rid of its terrorists remains at the “crux” of its problem along borders with India and Afghanistan — was re-litigated by the US side, which made it clear they will be watching closely. Compliance with the FATF commitment will be crucial. As part of the rectification plan, Pakistan has agreed to undertake certain measures to stop financing of terrorism, arrest and prosecute individuals involved in terrorism, and the Trump administration intends to hold Khan to it, invoking his own “stated commitment” that Pakistan for its own future will prevent the operation of “all militant groups on its territory”. “It’s a fact-based checklist,” the official said of Pakistan’s undertakings to the FATF. “We will certainly be looking how Pakistan is able to implement those commitment.” The official hastened to add that the FATF check-list was not a list of US demands and they were obligations given to the international community, but added, at the same time, that it was a “discrete, tangible and measurable” yardstick for Pakistan’s counter-terrorism efforts. https://www.hindustantimes.com/world-news/us-pressed-pakistan-on-fatf-compliance-during-imran-khan-s-visit/story-AzXO2BHwmytMSGPdugb17K.html
No comments: Links to this post