#Germany: #Hamburg wakes up to gutted shops and burnt-out barricades after night of clashes

FOR a city of well over 4m people, a provincial capital no less, to not have a burns centre defies logic. That is why Almas Bibi had to be shifted to a hospital in Kharian, Punjab, from Peshawar’s Khyber Teaching Hospital where she had been admitted in a critical condition on June 26. The young woman had allegedly been doused with kerosene and set alight by her in-laws in KP’s Nowshera district. Unfortunately, she breathed her last at the burns centre in Punjab on Thursday, four days after being transferred there. On Tuesday, while Almas Bibi was still struggling for life, the Peshawar High Court with reference to her case, expressed displeasure at the lack of a specialised burns centre in the city and summoned the health secretary in this regard.
Burn injuries can occur in any setting — the result of domestic violence as in the recent instance, in accidents as in Bahawalpur last month or in bomb blasts, of which there have been unfortunately too many in Pakistan. While some state-of-the-art burns centres have been set up, there are still far too few of them. In a province like KP, where medical facilities also have to cater to patients from tribal areas, the lack of a burns centre is a glaring deficiency in its health infrastructure. To reduce the risk of complications, it is vital that burns victims receive adequate treatment that begins immediately after the injury has occurred. As the body’s largest organ, the skin keeps it protected from the various pathogens in the environment. Burn injuries can therefore result in severe, potentially fatal bacterial infection setting in, unless patients are quickly placed in properly equipped isolation wards. An individual suffering from burns may experience serious fluid loss from damage to blood vessels, preventing the heart from pumping enough blood through the body. Severe burns can also result in body heat being lost; this increases the risk of hypothermia. KP must address the issue without delay.

The Joint Investigation Team (JIT) appointed by the Apex Court of the country for investigating the money trail leading to off shore companies in Panama owned by Sharif family has proved to be a curious phenomenon.
It has representatives of the six federal departments as members but it goes without saying that its pivot is constituted by the members coming from the two intelligence agencies dominated by the army. As if this wasn’t enough, picking some of its other members through WhatsApp calls instead of normal means of official communication deepened the mystery further. But the unsettling conduct didn’t stop here.
The team which is faced with paucity of time for investigating financial records, investments and money trails through banking systems of different countries spread over long years actually found time to conduct a survey of “media mischiefs” that are “obstructing” the team’s work ! Interestingly the aforementioned survey even covered time before the JIT had come into being. A signature of the deep state? Is it really surprising? Hasn’t a cycle of 7 to 8 years of Bonapartist intervention existed in the country’s history? Enjoying sanction of the Supreme Court and authority of the deep state the unfolding curious conduct of the JIT is turning into a syndrome.
The struggle between champions of controlled democracy (the deep state) and elected political governments upholding the 1973 Constitution has been a permanent feature of Pakistani politics in the post-Zia “republic”. The musical chairs game of the 1990s was just a reflection of this contradiction, when major political parties in opposition would lend their shoulder to the powers that be for overthrowing the government of political party in power. Launching “long march” was the a classic strategy for destabilising the sitting government and creating conducive atmosphere for the intervention of the deep state.
The situation changed to certain extent when PPP and PML-N signed the Charter of Democracy in 2006 under which they committed themselves to refrain from the unconstitutional practice of overthrowing the elected government. This was the context for the beginning of a new era of democracy in 2008 when an elected assembly could complete its constitutional term for the first time in Pakistan’s history. Everything wasn’t completely hunky-dory though. There was “ Memo gate” for the then PPP government and “Dawn leaks” for the current government. But these pressure tactics remained short of overthrowing of the sitting government.
Another important development in favor of strengthening the democratic process was the 18th Constitutional Amendment passed by the parliament in 2010.
Through this amendment democratic political forces made an effort to take the distortions and deformations out of the 1973 Constitution that were imposed on it by the martial law regimes of General Zia and General Pervez Musharraf. The 18th amendment further strengthened Article 6 by adding that the suspension of Constitution was an act of high treason. Previously, it was only the abrogation of, or threat to abrogate the Constitution that was regarded as act of high treason. So now even an adventurist can’t suspend the country’s Constitution and get away with it. There has to be more “creative” thinking for implementing the agenda of regime change without attracting action under Article 6 of the Constitution now.
The serious dilemma for Pakistan is that it is faced with the challenge of rampant corruption but the country’s ruling elites have failed to build a credible constitutional mechanism for carrying out across the board accountability. There have been and there are holy cows (both civil and military) that enjoy impunity. The culture of patronage and plunder has seriously undermined the credibility and legitimacy of elected political governments. Interestingly, three out of four full-fledged martial laws were imposed using the corruption issue as one of the main justification for military’s intervention in politics but those regimes also indulged in more corruption. So far the issue has been exploited for political point scoring but no one has come out with a tangible solution for it.
The Panama papers that were leaked more than a year back exposed the owners of off shore companies, a fact not in public knowledge before that. The list included hundreds of Pakistanis. It is true that no one from Pakistan was involved in hacking the computers that leaked the information, but the way the entire process of accountability has been kept strictly limited to one family only creates serious questions. There is a clear method in the madness. Everyone else, including a high court judge remains unacceptable. The irony has further deepened by the safe exit of General Pervez Musharraf who is facing charges of high treason for abrogating the Constitution.
But it’s important to mention the fact that the PML-N can’t be absolved from the responsibility of weakening the democratic system by marginalising the elected Parliament. It has bypassed the elected houses in policy making and the vacuum thus created is filled by unelected institutions. Democratic political forces have to act before it’s too late. They have to evolve a consensus on a credible system for accountability and continuity of democratic system. No one should forget that political parties will ultimately have to face the people’s JIT.
The writer is a retired Senator and an analyst of regional affairs.

Iranian border guards have fired three rockets today into Balochistan.
Reports from the area said the rockets were fired into Panjgoor district of Balochistan, which landed in Proome area. However, no casualty was reported in the rocket attack.
Area people said that loud explosions rocked the entire area when the rocket landed and exploded.
Recent attacks by Iranian guards in Pakistani territory and the kidnapping of Iranian guards in February this year have undermined relations between the two neighbours.
Earlier in the month of June, Pakistani air force fighter jet had shot down an unmanned Iranian drone in Balochistan. The unmanned aircraft was shot deep inside Pakistani airspace.
Whereas, in May, five mortar shells were fired from Iran that landed in Balochistan’s Chaghai area.
Iran, in recent months, has expressed concern over militants operating along the Pakistani border.
Iran’s army chief had warned that the country was willing to strike militants inside Pakistan — remarks that drew a strong protest from Islamabad.
http://nation.com.pk/national/08-Jul-2017/iran-fires-three-rockets-into-panjgoor
No comments: Links to this post 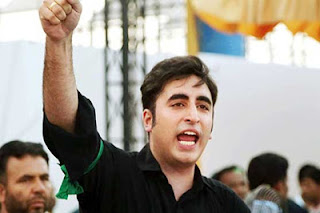 Chairman Pakistan Peoples Party Bilawal Bhutto Zardari has condemned the firing of Indian forces on LoC resulting in martyrdom of two innocent Pakistani citizens today.
In a statement, the PPP Chairman expressed grave concern over the Indian atrocities on Kashmiris even on the martyrdom day anniversary of Shaheed Burhan Wani.
He said that hands of Modi are soaked with the blood of innocent Kashmiris and Muslims urging the international community to take notice of unprovocative firing of Indian forces across the Line of Control and violations of human rights inside the held Kashmir. Bilawal Bhutto Zardari said that his Party salutes the people of Kashmir for their brave and untiring struggle for their legitimate right of self-determination.