Nawaz government in centre has once again renewed the 1990’s politics of revenge and is grossly violating the spirit and the joint communiqué of the Charter of democracy, which was also signed by the incumbent Prime Minister Mian Muhammad Nawaz Sharif. The PMLN is now throwing it in political isolation by commencing the politics of revenge. The framing a fake case against a very sane, respectable politician of Sindh and senior PPP leader Mir Munawwar Ali Talpur is not only based on ill-will but is also a manifest of completion of a secret agenda of some institutions, which is the continuation of bogus cases against Sindh Higher Education Commission Chairman Dr Asim Hussain.
PPP Karachi Division President Syed Najmi Alam, General Secretary Nadeem Bhutto, Izhar Ul Haq Hassanzai, Lateef Mughal and Syed Manzoor Abbas expressed these views in a joint statement issued from the PPP Media Cell Sindh Saturday.
While addressing Daniyal Aziz, a self-declared spokesman to his new leader the Prime Minister, they said that he should keep his logic and interpretation to him because the framing Mir Munawwar Ali Talpur in a fake case is only a continuation to the political victimisation.
They said the PPP is the party of the martyrs and dedicated workers (Jialas) that has always challenged the dictators while leader of Daniyal Aziz (Mian Muhammad Nawaz Sharif) had bowed his head to the dictator and tendered apology for sparing his life and left for Saudi Arabia where he lived his days of exile in palace.
They said contrary to Mian Nawaz Sharif, Shaheed Zulfiquar Ali Bhutto embraced martyrdom but refused to bow his head to the then dictator Zia and Shaheed Mohtarma Benazir Bhutto gave her life for the masses despite threats. Likewise, former President Asif Ali Zardari remained jailed for over a decade but did not shake hand with the authoritarian powers.
They said the PPP does not believe in politics of revenge but believes that the democracy is the best revenge.
https://mediacellppp.wordpress.com/2016/01/09/nawaz-govt-reviving-politics-of-revenge-violating-cod-ppp/ 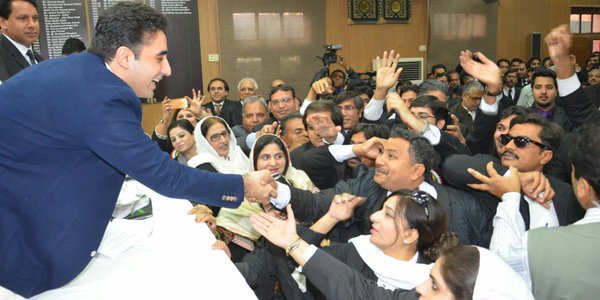 Judiciary is one of the pillars of the state that acts as an arm of the government. Especially for the trembling governments, it is imperative for the judiciary to be independent and powerful to help the political systems even out. Unfortunately, despite more than sixty years to the creation, the judiciary of Pakistan has been destabilized by the anti-democratic elements ever and anon. But in the fight for the independent judiciary, one party that has been on the forefront to enforce the supremacy of the constitution and the rule of law is Pakistan Peoples Party. This party never hesitated in struggling for the independent judiciary while its rivals sometimes worked against it or sometimes supported the cause having their own ill intentions behind that were pretty much evident during the last governmental tenure when a single individual, mainstream political parties had fought for, almost turned into a vigilante and worked tirelessly with the support of opposition to oust the democratic government which came into existence after an elongated martial law.
PPP is the only political party to have worked as per its manifesto to safeguard the law. In this regard, Shaheed Mohtarma Benazir Bhutto endeavored with the lawyers to ensure strong and impartial judiciary. But exploring the judicial history of Pakistan, one court that holds the major significance in shaping political dynamics of the country is the Lahore High Court. Pakistan Peoples Party stands as the biggest victim that fell prey to the unchallenged atrocities committed in hallowed halls of this court since it awarded death sentence to the populist leader ZA Bhutto. This court being one of the oldest courts in the country has been so powerful that its verdict was upheld by the Supreme Court resulting in the execution of the first democratically elected prime Minister of Pakistan. In the same Lahore High Court, many times political revenge was sought by judiciary on behest of ruling authorities from Benazir Bhutto as well as Asif Ali Zardari through abuse of judicial process. However, connected to this court is its bar association, the professional body of Lahore High Court Lawyers, that has its own glorious chronicles of shielding the democratic values defined in the constitution throughout dictatorial regimes. LHCBA had not only recorded protests against the judicial murder of Zulfiqar Ali Bhutto but also hailed his daughter being the most prominent flag-bearer of democracy, officially declaring 2007 as “Year of Struggle of Benazir for Democracy”.
Today at the time when Pakistan is in urgent need of implementation of actual democratic principles in accordance with the law, the youngest politician Bilawal Bhutto Zardari, during his brief trip to Lahore, chooses to address the Lahore High Court Bar Association that has played great role in the administration of justice. This effort to strengthen ties between the judicial power and national politics by the young vibrant leadership of the PPP is of noteworthiness and manifests his vision. Although the corridors of Lahore High Court are not new for the family that has paid several visits fighting the baseless cases, but following in the footsteps of the mother and the father, Bilawal Bhutto Zardari has shunned any grievances and is taking a step ahead.
It takes strong political will to enhance support for the judiciary that made his family suffer the most, and he has proved to be having the prudence and insight that can steer institutions out of madness and ensure real supremacy of the constitution. The future leader taking interest in the judiciary is a good omen especially when the country is at war against the menace of terrorism as heavy responsibility lies both on the judiciary as well as the political parties. More cooperation between both the pillars would result in effective outcomes.
Moreover, addressing the Lahore High Court Bar Association at the outset of his political career is very substantive especially on the account of its historical worth as ‘The Thinker of Pakistan’ Allama Iqbal had also been its member. The same high court has also had the honor to be braced by the appearance of the founder of Pakistan Mohammad Ali Jinnah on an occasion. Hope other political leaders will follow the suit as such rendezvous with the judicial institutions will be fruitful for the democracy in Pakistan.
No comments: Links to this post