A loss in Afghanistan: But did Sangin 'fall' or was it strategic retreat?

Jeanette Steele Jeanette Steele
The Afghanistan district that cost dozens of San Diego Marines their lives is now in Taliban hands again. But was it “strategic retreat” or a heavy blow to the NATO effort there?
The opium-rich Sangin region of southern Afghanistan was overrun by Taliban troops late last week. The Taliban is celebrating it as a victory in the now 16-year-old war. But NATO and U.S. officials say they had planned for months to move a headquarters post a few miles away after Sangin’s civic center was badly deteriorated after many battles.
And, they say, anything of value was destroyed before Afghan soldiers left. U.S. aircraft were used to transfer Afghan personnel to the new location.


“There is nothing left in the old district center except dirt and rubble,” U.S. officials said.
Some observers are calling that spin. An analysis in The Long War Journal called that description of events “not credible.”
The group Terror Monitor said the Taliban released an infographic listing of an inventory of goods it captured as the “spoils of war.”
There’s no question that the anti-Taliban campaign known as Operation Resolute Support has seen mixed results.
Security in Afghanistan has been deteriorating since U.S. force levels dropped from a high of 100,000 in 2011 to the current size of roughly 9,000, according to the Institute for the Study of War.
Welcome to The Intel, a blog examining the hot military news of the day
Russia is also attempting to exert its influence.
“Russia will continue to establish itself as the dominant broker of peace in Afghanistan in order to gain leverage over the U.S. and NATO,” the same institute concluded in an update on Afghanistan last week.
Sangin is hallowed ground for some Camp Pendleton Marine veterans, after they bled to wrest it from the Taliban starting in 2010.
Marines from the 3rd Battalion, 7th Marine Regiment took over there in 2010 as the American surge revved up in that country.
Some 50 U.S. Marines were mortally wounded in Sangin in part due to aggressive use of roadside bombs by the Taliban.
Half died with Camp Pendleton’s “Darkhorse” 3rd Battalion, 5th Marine Regiment, the first Marine unit to serve a full seven-month tour in Sangin during the surge.
More than 200 of the battalion were seriously injured, in what was thought to be the worst casualty rate to that time for a unit its size during the Afghan war.
The British also paid a heavy price in the years just before.
As some lamented in the British press recently, Sangin accounted for a third of that nation’s dead in Afghanistan at the time.
Others in the West, including academics, expressed dismay and raised the question of whether this war will ever conclude.
No comments: Links to this post

PPP readjusting its strategy to capture Punjab in 2018 polls 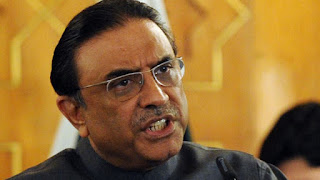 Pakistan People's Party (PPP) Co-Chairman Asif Zardari has decided to snatch "Takht-e-Lahore" from the ruling Sharifs by dividing Lahore in four districts.
The Sharifs have already decided to divide Lahore in four zones to get the support of local bodies by mobilising their leaders.
The PPP leadership has started reconsidering its policies to come to power again in both the centre and Punjab, especially in Lahore.
Zardari has prolonged his stay in Lahore to make a better strategy and improve the party's organisation.
to snatch Takht-e-Lahore from the ruling Sharifs
Sources told Daily Times that PPP leaders have suggested Zardari to divide Lahore into four districts.
Sources added that work has been started and Zardari has urged four former presidents of Lahore PPP Azizur Rehman Chan, Misbahur Rehman, Aslam Gill and Aurangzeb Barki to serve the party. Sources, said the former PPP presidents were hesitant as they considered the offer as an insult.
Sources said further the party leadership, after getting a cold shoulder, has started considering Naveed Chaudhry and Faisal Mir for the slots. Sources added that Mir was also not interested in holding the office. Previously, the office of Lahore PPP president was equal to that of the Punjab PPP president. The Lahore president used to report to the party chairman, but the new organisation would demean the slot.
No comments: Links to this post

My experience and Bilawal's youth to strengthen PPP, says Zardari 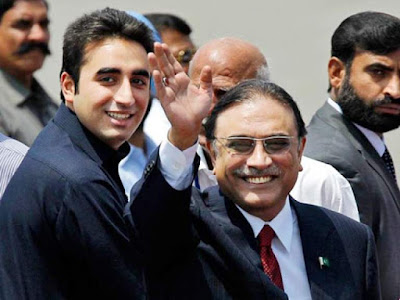 Former president and Pakistan People's Party co-chairman Asif Ali Zardari has said that his experience coupled with Bilawal Bhutto Zardari's youth will become party's strength for next election.
Asif Ali Zardari on Monday presided a meeting of PPP ticket-holders and leaders from Rawalpindi chapter at Bilawal House, Lahore, wherein the PPP members demanded for quitting party's reconciliation policy.
They called for aggressively competing with the ruling Pakistan Muslim League-Nawaz and Tehreek-e-Insaf, and responding to every allegation by the interior minister, according to the PPP media cell.
After listening to the party affiliates, Asif Ali Zardari directed them to expedite preparations for PPP rally in Chakri, near Rawalpindi. He said the PPP workers and leaders are ready to respond to anyone attacking the party.
Reiterating that Bilawal Bhutto is empowered to make decisions, he said that his experience coupled with Bilawal's youth will become strength of the party.
The ex-president will also address the PPP public gathering in Chakri, said the party's media cell in a statement.
No comments: Links to this post