Aseefa, during a press conference on Friday, said that the health condition of her father required him to stay in the hospital for further tests and treatment.

Former Pakistan president Asif Ali Zardari's daughter has alleged manhandling by police when she went to meet him in hospital, saying that she was not allowed to meet her father who was sent back to jail despite being seriously ill, according to a media report.

Zardari, 64, was shifted to Pakistan Institute of Medical Sciences (PIMS) from Adiala Jail for medical checkup on Thursday after his son Bilawal Bhutto blamed the Imran Khan government of denying him medical facilities in the prison. However, Zardari, who is also the Pakistan Peoples Party (PPP) co-chairman, was shifted back to the jail.
Aseefa, during a press conference on Friday, said that the health condition of her father required him to stay in hospital for further tests and treatment, the Dawn newspaper reported.
Three of his arteries are completely blocked. He is suffering from severe spinal issues and other ailments, she said.
"Denial of medical right is denial of human rights and justice. It is political victimisation, she said. Aseefa later tweeted that she went to see her father with a court order but hospital doors were locked and no patients were allowed in or out, the report said. Finally managed to enter only to find police blocking stairs and elevators. Waited for my father at the elevators when police decided to form a chain to stop me for seeing him. Stopped, Pushed, manhandled by police, she tweeted.
Former prime minister Raja Pervez Ashraf, who accompanied Aseefa to the hospital, said "If something happened to Mr. Zardari, then we will hold the selected government accountable.
Zardari's son Bilawal Bhutto, who visited his father and paternal aunt Faryal Talpur earlier this week in the jail, accused the government of "attempting to kill" Zardari by denying him medical facilities in the prison.
Zardari, husband of the country's first woman prime minister Benazir Bhutto, was arrested by the National Accountability Bureau (NAB) in a corruption case on July 1. He was shifted to Adiala jail earlier this month.
According to NAB, Zardari is being investigated for his alleged involvement in extending loans and other misappropriation by Parthenon Private Limited, Park Lane Estate Private Limited and others.
The 11th president of Pakistan from 2008 to 2013 has denied any link with the fake accounts. He has said the allegation was part of a vilification campaign by Imran Khan-led ruling Pakistan Tehreek-e-Insaf (PTI) party to malign the Opposition leaders.
https://www.news18.com/news/world/former-pak-president-zardaris-daughter-alleges-manhandling-on-her-visit-to-meet-ailing-father-2292003.html
No comments: Links to this post

Aseefa Bhutto Zardari on Friday told journalists that her father Asif Ali Zardari has again been shifted to prison from the hospital.

Addressing a press conference here at Zardari House, Aseefa said when she visited her father in hospital Friday morning, doctors informed her that they are being pressurized to shift back former president Zardari to jail whereas his condition requires that he should stay at the hospital for further tests and treatment. “Two medical examinations were conducted, one by NAB authorities and other by judicial authorities. Both examinations show that Zardari needs immediate medical attention,” she said. “One of the reasons is that three arteries in his heart are blocked. He also suffers from severe spinal issues as a result of 11-and-a-half years of unlawful incarceration. Due to such issues, he needs immediate medical attention,” she observed.

Aseefa Bhutto said that her family and Pakistan People’s Party (PPP) demand that former president Zardari is immediately shifted back to hospital to receive proper medical treatment. “This is his right as a citizen of Pakistan and also as former president and head of a political party and sitting MNA. Denial of his right is denial of human rights as well as justice. This is political victimisation. He is the only former president not running away from the courts and from the country,” she said. “We will like to reiterate PPP Chairman Bilawal Bhutto Zardari’s statement that it clearly shows the intent of the selected government to endanger Zardari’s life to achieve its own agenda,” she said, and warned that if anything happens to her father, the family and the party will hold the ‘selected’ government responsible and accountable. Former prime minister Raja Pervaiz Ashraf said that government doctors have advised to keep Zardari in hospital for treatment but this government is not providing him health facilities, and demanded to shift him to the hospital immediately. Former senator Farhatullah Babar said that on the day when ‘selected PM’ was asking people to protest against human rights violations in Kashmir. he himself violated the basic rights of a former president of Pakistan. Senator Sherry Rehman said there will be consequences if ‘selected’ government does NOt give up its conduct, and warned that the government will have to face resistance by the PPP. https://dailytimes.com.pk/457147/aseefa-bhutto-expresses-concern-for-her-fathers-life/
No comments: Links to this post

A doctor belonging to the Shia community was shot dead in Gulshan-i-Iqbal on Friday, said police.
According to police, Dr Haider Askari, 58, was gunned down by two armed pillion riders at KDA Market, Block- 3, near Disco Bakery, while he was driving his car. 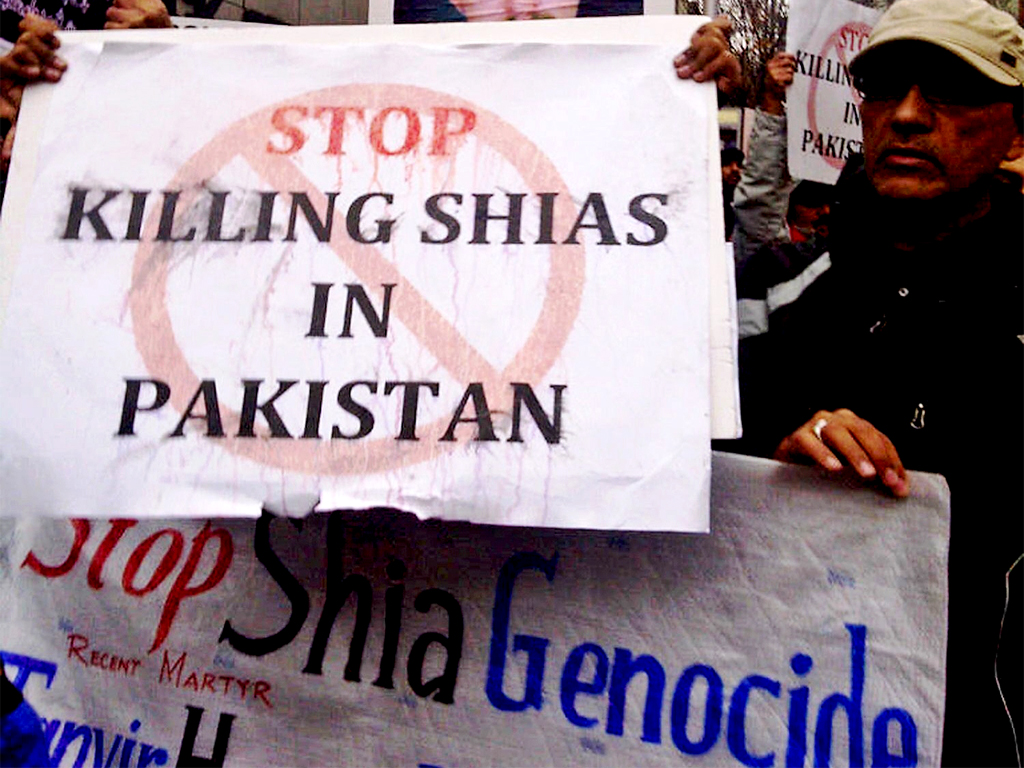 According to Gulshan SP Shahnawaz Chachar, the incident occurred at around 12:30pm when the doctor, a cardiac specialist, was on his way to his Gulshan-i-Iqbal residence after getting off from work at a government hospital in Korangi.
He sustained a single bullet wound on his left shoulder and was taken to Aga Khan University Hospital where he died during treatment. Later on, his body was taken to Jinnah Postgraduate Medical Centre (JPMC) to fulfil legal formalities.The Gulshan SP said investigators were focusing on two possible motives behind the murder: sectarian killing or a robbery bid.The officer opined that since the victim belonged to the Shia community and owing to the timing — with the month of Muharram around the corner — they could not rule out sectarianism as a possible motive behind the incident.
The killing might also be the outcome of an attempted robbery, he said.
SP Chachar quoting witnesses said that armed pillion riders had instructed Dr Askari — who had been driving alone — to stop his car. As he accelerated in an attempt to escape, the suspects fired a single shot. The investigators collected one spent bullet casing fired from a 30-bore pistol from the crime scene.
This was the second murder of a doctor in the city this week.
Dr Ayesha, an expatriate Pakistani, was gunned down ostensibly for resisting a house robbery by four armed men in Gulistan-i-Jauhar area.The victim had come to the city to attend the marriage ceremony of a relative when she was murdered.
MWM condemns sectarian killing
Meanwhile, Majlis-i-Wahdat Muslimeen condemned the incident, terming it a "targeted killing".
"The sectarian killing of a Shia community member in Karachi prior to Muharram-ul-Haram is regrettable," said Allama Baqar Zaidi, expressing fear that such an incident might trigger a wave of such killings.
The MWM urged the federal and provincial governments to take notice of the matter and apprehend the killers immediately.

Akalis issue ultimatum to Pakistani govt that Sikhs in Pakistan will protest in Lahore Saturday if the girl is not released by Friday night.

There is outrage in Punjab over allegations that a Sikh girl has been abducted and forcibly converted to Islam through marriage in Pakistan.
While Chief Minister Captain Amarinder Singh has demanded strict and firm action against the perpetrators, the Akalis have given an ultimatum to the Pakistani government that if the girl is not released by Friday night, Sikhs in Pakistan will protest in Lahore Saturday.
The minor Sikh girl, Jagjit Kaur, was allegedly abducted and forced to change her religion. She is from Nankana Sahib in Pakistan and is the daughter of granthi (head priest) Bhagwan Singh of Gurdwara Sri Tambu Sahib.
The incident has drawn the attention of Sikhs worldwide and sparked anger in the community.
Union Minister Harsimrat Kaur Badal has taken up the issue with Foreign Affairs Minister Dr S. Jaishankar. Terming the act as being shameful, Harsimrat said Pakistan Prime Minister Imran Khan should immediately take action against the perpetrators.
Shiromani Akali Dal (SAD) leader and Delhi Sikh Gurdwara Management Committee (DSGMC) president, Manjinder Singh Sirsa, who led a delegation to meet officials in the foreign affairs ministry Friday said Sikhs will hold a protest in front of the Governor’s house in Lahore where an international conference is being organised.
“I have received telephonic calls from the father and the brother, Manmohan Singh, of the abducted girl as their family is in trauma,” Sirsa said. “They want the safe return of the girl.”
He said Indian officials were in touch with the acting High Commissioner of Pakistan on the issue.
MEA spokesperson Raveesh Kumar said India has shared its concerns with Pakistan over the issue.
“The ministry has received a number of representations from various quarters of civil society in India, including Sikh religious bodies in India, at the reports of the incident of abduction and forced conversion of a minor Sikh girl in Pakistan. We have shared these concerns with the Government of Pakistan and asked for immediate remedial action,” he said.

Capt.Amarinder Singh ✔@capt_amarinder
Shocking incident of a Sikh girl being kidnapped & forced to convert to Islam in Nankana Sahib, Pakistan. Call upon @ImranKhanPTI to take firm and immediate action against the perpetrators. Request @DrSJaishankar to strongly take up the issue with his counterpart at the earliest. 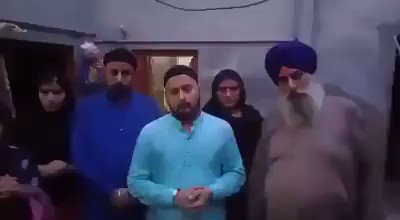 6,321 people are talking about this

A video of the girl’s purported wedding to a Muslim boy Zulfiqar Ali has gone viral. In the video, she is saying that she has married the boy without any pressure and has adopted Islam on her own volition.
Sirsa, however, alleged that the video was clearly made under duress and the girl has been forced to give her consent to the marriage.

Ravinder Singh Robin ਰਵਿੰਦਰ ਸਿੰਘ راویندرسنگھ روبن@rsrobin1
Not only the Hindu girls are forcibly converted to Islam in Pakistan but SIKH Girls also. A daughter of a Granthi of #GurdwaraTambuSahib in #Nankana Sahib was missing for past 3 days has surfaced on Thursday after marrying a Muslim man & embrassing Islam . @MEAIndia @HMOIndia 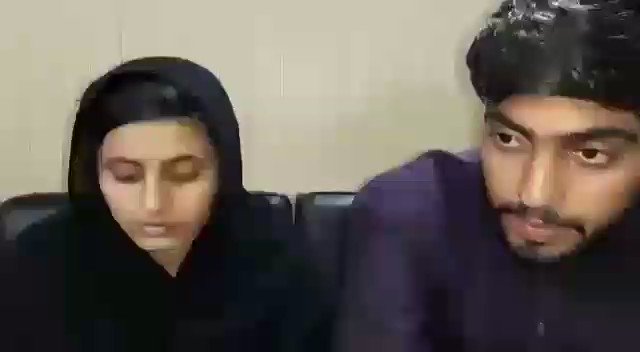 4,106 people are talking about this
The girl’s family also released a video regarding the incident Thursday alleging that the girl was forcibly picked up from their house. Manmohan Singh, the girl’s brother, said the persons who had come to pick up the girl threatened her that in case she refused, the entire family would be forced to convert to Islam. He requested the Prime Minister Imran Khan and the army chief General Qamar Bajwa to intervene in the matter and return the girl safely back to her family.

Ravinder Singh Robin ਰਵਿੰਦਰ ਸਿੰਘ راویندرسنگھ روبن@rsrobin1
#BREAKING: Family of Sikh Girl Jagjit Kaur who was abducted in Pakistan and forcibly converted to Islam speaks out. Family calls upon @ImranKhanPTI and Pakistan Army Chief to act or else the incident could impact both #KartarpurCorridor and Kashmir. 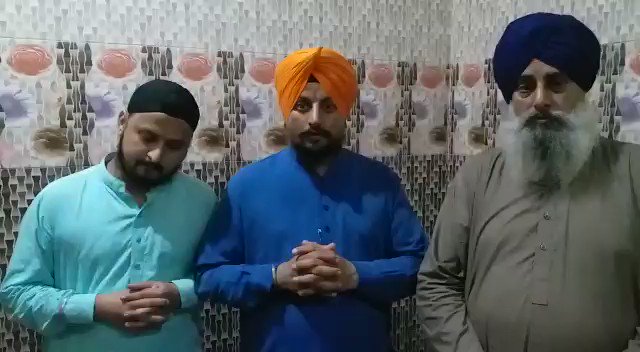 6,034 people are talking about this
No comments: Links to this post