The ''Azadi March'' against Pakistan's Imran Khan government was led by influential right-wing Pakistani cleric Maulana Fazlur Rehman's Jamiat Ulema-e-Islam-Fazl (JUI-F).
Pakistan's hard-line cleric Maulana Fazlur Rehman on Friday gave Prime Minister Imran Khan a two-day ultimatum to resign, saying the "Gorbachev of Pakistan" must step down without testing the patience of peaceful protestors. Addressing a massive protest rally, dubbed "Azadi March", held in Islamabad to topple the incumbent government, Rehman said only people of Pakistan and not any "institution" had the right to govern the country.

The much-hyped rally led by the right-wing opposition leader's Jamiat Ulema-e-Islam-Fazl (JUI-F) reached its final destination Islamabad on Thursday after it set off from the Sindh province and left Lahore on Wednesday. Along with Rehman, leaders of the Pakistan Muslim League - Nawaz (PML-N), Pakistan People''s Party (PPP), and Awami National Party (ANP) participated in the march held to topple Pakistan Tehreek-e-Insaf government led by Prime Minister Khan. "The elections of 25 July were fraud elections. We neither accept the results nor the government that came into power after those elections...We gave this government one year but now we cannot give them any more time," he said. He said the Khan's Pakistan Tehreek-e-Insaf (PTI) government has destroyed the economy while endangering the very existence of the country. "The Gorbachev of Pakistan must go. We give (Khan) two days to resign, otherwise, we will decide about the future," he said. Rehman said the protestors were peaceful but their patience should not be tested.
He urged his followers to stay put and "do not move until we get his resignation". He said the future course of action will be decided in consultation with the opposition parties and the protestors if the deadline was not met. Rehman also urged the powerful institutions (of armed forces) to stay neutral in the situation. "We do not want conflict with our institutions. But we also want to see them to stay neutral. We give two days to the institutions (also) to decide if they will continue to support this government. After that, we will decide what opinion we should have about them (institutions)," he said. Rehman also attacked the government's Kashmir policy and accused it of abandoning Kashmiris.

He said the government was making friendship with India by opening up the Kartarpur corridor. "The time has come to get rid of this fake government. "We will not let Imran Khan Niazi go free until Pakistan gets rid of [the prime minister]," said PML-N president Shehbaz Sharif while addressing the huge gathering attended by tens of thousands of people here. "We have launched a movement to get rid of the government and will take this movement to logical end," he said. The joint opposition can stabilise the country's economy within six months if given a chance, Sharif said, adding that he has never seen a worse state of affairs in the country's 72-year history. "If given a chance, we along with the joint opposition will fix Pakistan''s economy within six months, [otherwise] you can rename me as ''Imran Niazi''," he was quoted as saying by the Dawn newspaper. ANP leader Mian Iftikhar Hussain said the opposition parties will not rest until the Pakistan Tehreek-e-Insaf-led government has been "sent home".

He said the first and foremost demand of the ''Azadi March'' protesters was the resignation of Prime Minister Khan. "Our election has been stolen," he said, referring to the Tehreek-e-Insaf (PTI) government coming into power. Addressing the demonstrators at the venue, PPP chief Bilawal Bhutto Zardari said Imran Khan was a "puppet" and the nation is not ready to bow its head before a "selected" prime minister and "those who have selected him". "We do not accept this selected government...Everything done by the government is against the interests of the people," he said, adding that the PTI government has sold Kashmir to India which was unacceptable to the people. He said the army was deployed inside and outside the polling stations in last year elections to facilitate Khan''s victory. Unfazed by the protest, Prime Minister Khan, while addressing a public rally in Gilgit-Baltistan, told the protesters congregated in Islamabad that when they run out of food, more will be sent to them, but their leaders should not expect any relief from him. "Gone are the days when one used to use Islam to gain power.

This is a new Pakistan. Sit however long you want. When your food runs out, we will send more. But we will not give you an (NRO)," he said. National Reconciliation Ordinance (NRO) was an ordinance issued in October 2007 granting pardon to politicians, political workers and bureaucrats accused of corruption, embezzlement, money laundering, murder, and terrorism. "Who are they wishing to gain freedom from? I want the media to go there and ask people who they wish to free themselves from," Khan said, adding that all his opponents appear disjointed in their thoughts and aims. The prime minister said the protest rally had made Pakistan's enemy happy. "I will put all of them into jail," he said, in an apparent reference to former premier Nawaz Sharif, his brother Shehbaz, former President Asif Ali Zardari and former prime minister Shahid Khaqan Abbasi. The government has taken elaborate security arrangements to keep calm in the capital. Main roads have been completely or partially blocked by placing shipping containers. 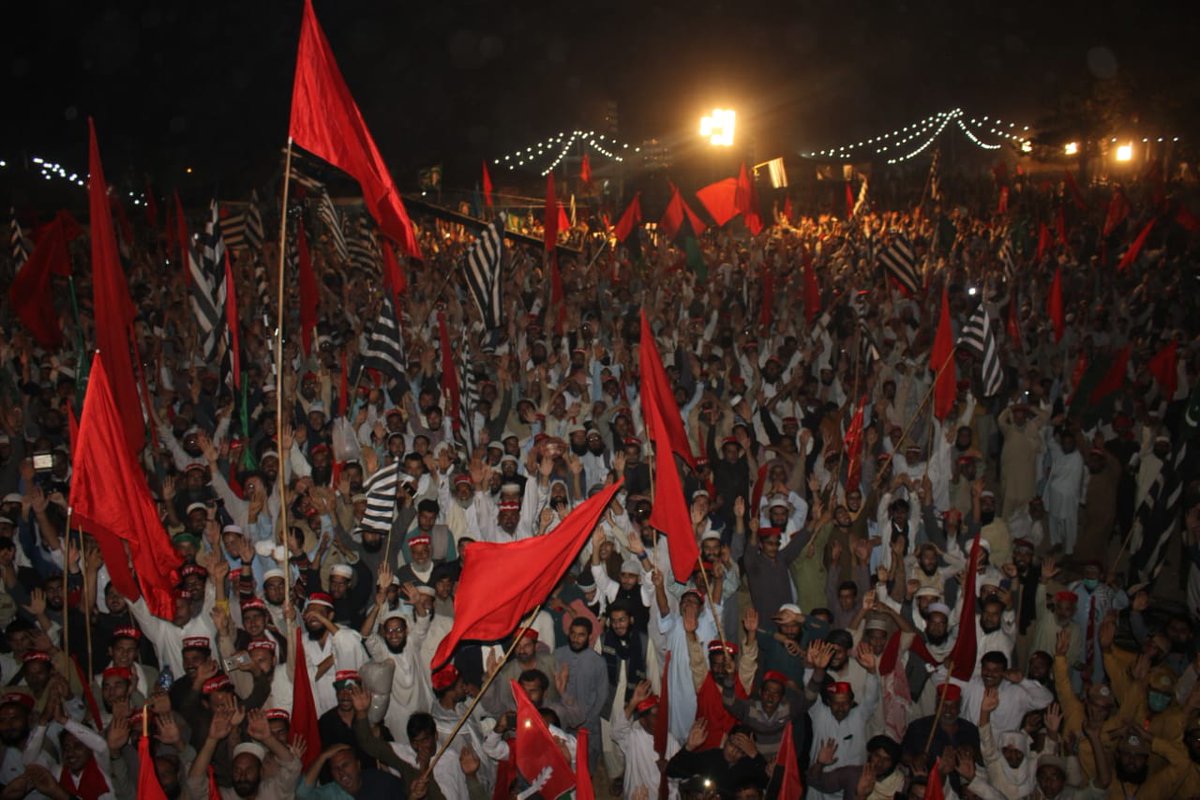 Prime minister promises not to step down, as thousands continue anti-government sit-in protest in Islamabad.
Pakistani opposition leaders have renewed their demands for Prime Minister Imran Khan to step down, terming his government illegitimate and incompetent, as thousands gathered at an anti-government protest in the capital Islamabad.
Addressing supporters on the second day of the protest in Islamabad on Friday, leader of the right-wing Jamiat Ulema Islam-Fazl (JUI-F) party, Fazl-ur-Rehman, said a sit-in would continue for two more days.
"Today, this gathering is making it clear to the whole world that only the people have the right to rule Pakistan, no institution has any right to reign over Pakistan," he said in an indirect reference to the country's military, which has ruled the country for roughly half of its 72-year history and is accused by the opposition of backing Khan's Pakistan Tehreek-e-Insaf (PTI) party.
Earlier in the day, a defiant Khan addressed supporters in Gilgit-Baltistan, a part of Pakistan-administered Kashmir, saying he would not resign.
"Sit however long you want," he said in a message to the protesters.
"When your food runs out, we will send more. But we will not give you a [deal]," Khan said, insinuating that opposition leaders were trying to pressure his government to drop corruption investigations into previous governments.
Khan's government has led an anti-corruption drive that has seen former Prime Ministers Nawaz Sharif and Shahid Khaqan Abbasi from the opposition PML-N party, former President Asif Ali Zardari from the PPP and numerous others jailed pending corruption investigations.The opposition says the cases are politically motivated, accusing Khan of using accountability as a tool to silence dissent.
Rights groups have raised concerns regarding the fairness of the process, and a wider crackdown on dissent.
At the protest in Islamabad, PPP co-chairman Bilawal Bhutto-Zardari, Asif Zardari's son, decried widespread censorship of the press and dissent under Khan's government, asking: "What kind of freedom is this?"
Economic crisis
The protests, which began on Sunday with a demonstration in the southern coastal city of Karachi and which gained in strength as the protesters' caravan traveled through the country, have been fuelled by a deepening economic crisis.Ziauddin, 24, a student from the northern district of Dir, travelled more than 12 hours to attend the protest in the capital on Friday."We are badly affected by the rise in prices," he told Al Jazeera in Islamabad. "It's hard to find a job. Now everything is getting more expensive."
Inflation has been steadily increasing in the South Asian country, with consumer price inflation recorded at 11.4 percent in September, according to the Pakistan Bureau of Statistics.
Economic growth, too, has been slowing, with the International Monetary Fund (IMF) predicting 3.3 percent growth this year, slowing to 2.4 percent next year.
Khan's PTI, which came into power in 2018, has been struggling to control widening fiscal and current account deficits, while simultaneously attempting to spur growth.
In May, the IMF finalized a $6bn bailout, to be paid out over more than three years, to help bolster foreign reserves for the struggling economy. 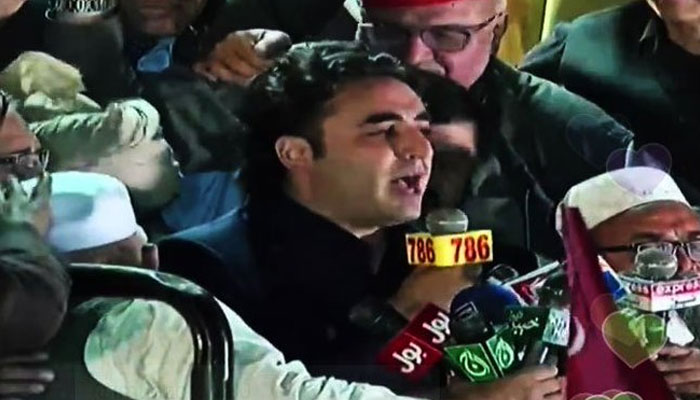 Chairman Pakistan Peoples Party (PPP) Bilawal Bhutto Zardari Friday said the people of Pakistan don’t accept any ‘selected’ or ‘puppet’ Prime Minister and it’s time for him to go home.
“The people of this country won’t accept any selected or puppet premier nor are they willing to surrender to any dictator,” said Bilawal, addressing the Azadi March in Islamabad.
Dubbed the ‘Azadi’ march, the JUI-F chief Fazlur Rehman-led caravan, which set off from the Sindh province, left Punjab’s city Lahore last night and arrived in Pakistan’s capital city, Islamabad late Thursday.
“The people of this country want only democracy and freedom from all the puppets, selectors and the selected.”
Taking jibe at the PTI-led government, Bilawal said the performance of what he called the puppet government is visible to everyone after the lapse of one year of this government, adding the puppet government has no consideration for the masses.
The young PPP chairman said attacks are being launched at democracy for which the political parties suffered a lot and the rights of the people are being usurped.“Selection is carried out in the elections. Rigging is managed. Polling agents are thrown out of the polling stations. The RTS system is aborted. As a result of the rigging, an inefficient, ineligible and puppet is selected to be the prime minister of this country,” he said.And, that puppet is continuously assaulting the country’s federation, democracy and economy ever since, he said.
The PPP leader said the puppet governments aren’t elected because of people’s vote, instead, they assume power because of someone else, hence they pay heed to their selectors, not the masses.
All the political parties have unanimously given the message that the ‘selected’ premier Imran Khan will have to go home now.
The people are economically assassinated with the help of excessive taxes and raging inflation ever since the Imran Khan-led government came, he pointed out.