Awami National Party (ANP) central General Secretary Mian Iftikhar Hussain said on Monday that the recently held general election was a question mark on the impartiality of the Pakistan Army and credibility of the Election Commission of Pakistan (ECP). He was speaking at a joint protest rally of the Muttahida Majlis-e-Amal, Pakistan Muslim League-Nawaz and ANP against the alleged rigged elections. Mufti Hakim Ali, Pir Zulfiqar, Ikhtiar Wali, Alhaj Pervez Khattak, Mian Zahoor Kakakhel, former lawmaker Qurban Ali Khan, Amir Alam Khan, Inayatur Rehman, Jamal Khattak and others were present on the occasion. Mian Iftikhar said all political parties rejected the results of the election. "All parties demand re-election in the country," he said. "It has not only created doubts about the impartiality of the army but has also damaged democratic process in the country," he said. Iftikhar said the election should have not been held under the supervision of the army. "The ECP failed to conduct free, fair and transparent election," he said. He added that Pakhtuns had been pushed to the wall. https://www.thenews.com.pk/print/348497-mian-iftikhar-questions-ecp-s-credibility
No comments:

Why do Pakistan’s Federally Administered Tribal Areas have such a high gender gap in education?

With the emergence of militants in the 1990s, the social, cultural, and economic structures of the Federally Administered Tribal Areas (FATA) in Pakistan were badly damaged, most significantly affecting women’s lives. Access to basic services like health and education was reduced, with mobility so minimized that women were not permitted to see a doctor, attend school, or have social interactions. Worse, the militants physically abused residents in FATA. With minimal law and order, the instability and isolation directly affected the overall economic and social status of this region where more than 60 percent of the population lives below the national poverty line.
Data from the Pakistan Education Statistics 2016-17 report shows that the overall reality of education remains bleak, with 22.6 million children out of school—more than half of whom are girls. Indeed, Pakistan holds the second highest gender gap in the world, according to the 2017 Global Gender Gap report. In FATA alone, more than half of the eligible grade 1-12 girls have never stepped foot inside a school and only 1 in 10 girls can read. Moreover, increased militancy, as well as military operations from both United States and Pakistani forces until 2014 respectively, resulted in the displacement of three million FATA residents. Consequently, schools were destroyed, poverty skyrocketed, and without a source of income, thousands of girls either dropped out or never enrolled in school.
WHY ARE GIRLS NOT IN SCHOOL?
In many parts of Pakistan, outside of FATA, the core reason for girls not attending schools or dropping out is poverty. Even after Article 25-A was added to the constitution in 2010, to make public basic education free, the provinces are still struggling with its implementation and leaving poor families to bear the entire cost of education for their children. Another hindrance, which varies by geography and families’ economic status, is parents’ attitudes towards girls’ education, where the education of boys, who are seen as the eventual breadwinners, is prioritized over girls’ education. Parents become even less interested in educating their daughters when they realize she will be leaving the family after marriage. Finally, many parents question the quality of education, which ultimately influences their decision on whether to send their daughters to school.
The fact that half of girls in FATA have never been to school warrants further exploration. There is not much evidence on the context-specific reasons around out-of-school girls in FATA. While some of the above-mentioned national level reasons may likewise be evident in FATA, given its unique cultural and political context, more research is needed.
WITH A NEW NORMAL, FATA IS OPENING DOORS FOR EDUCATING GIRLS
Now is the time to explore the realities of girls’ education in FATA. Since 2014, following the establishment of peace and government efforts to bring considerable reforms to the FATA region, FATA is now gradually moving towards “normality.” The first substantial step toward this change was a bill that was passed to merge FATA region with the neighboring Khyber Pakhtunkhwa (KP) province. Such steps toward mainstreaming the isolated tribal areas of FATA can significantly improve the life of people in this borderland, including their access to basic rights like education.
To improve girls’ education in FATA, understanding the local context with all of its challenges and opportunities is necessary. As an Echidna Global Scholar, my research at the Brookings Institution will strive to provide a deeper understanding of girls’ education issues in FATA’s constantly changing environment. My research will also help in distinguishing myths from realities around the barriers to girls’ education, along with identifying opportunities that already exist or have emerged over time to improve the status of girls’ education in FATA. A nuanced understanding of the educational context in FATA region will prove helpful for policymakers and implementers in adopting approaches that are more context-specific and culturally sensitive. Without well-informed and focused efforts to improve girls’ education, it will not be possible for Pakistan to make full use of FATA’s potential and fully implement its reform agenda, to bring this long-isolated region on par with the rest of the country.

PPP has always struggled for strengthening of democracy and parliament: Bilawal Bhutto 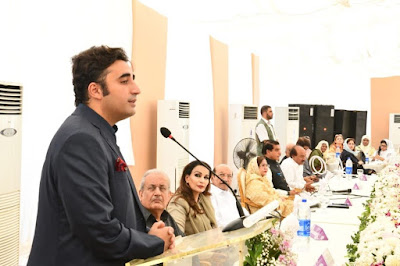 Chairman Pakistan Peoples Party Bilawal Bhutto Zardari has said that his Party has always struggled for strengthening of democracy and the Parliament pledging that PPP would use the Parliamentary forum to advance its ideology and ideals.


The PPP Chairman was addressing a luncheon meeting with the newly-elected Parliamentarians from the country at Bilawal House today. Former Prime Minister Raja Pervez Ashraf, PPP Women President Faryal Talpur, Leader of the Opposition in the Senate Sherry Rehman, Syed Qaim Ali Shah, Khursheed Ahmed Shah, Nisar Ahmed Khuhro, Senator Raza Rabbani and Murad Ali Shah were also present.
Bilawal Bhutto Zardari said that despite difficulties and pre-poll pressures on candidates and workers, the PPP fared better in 2018 general elections than 2013.
He said that some opposition parties were considering to boycott the new parliament but PPP convinced them to join the Parliament and fight for democracy, which a victory for democrats though we had also reservations over the election process.
Bilawal Bhutto Zardari emphasized that we have to focus on delivery in Sindh as we are entering a new era where good governance and better performance should the hallmark of the new provincial government. “We cannot let down the people who sent us to the Parliament as we are facing great challenges on international and economic fronts while other political parties are taking extreme positions on key issues,” he added.
http://www.thesindhtimes.com/pak/07/ppp-always-struggled-strengthening-democracy-parliament-bilawal-bhutto-zardari/
No comments:

The United States on Tuesday froze the assets of three Pakistanis it has linked to Lashkar-e-Taiba, the militant group blamed for the deadly 2008 attacks in India’s financial capital, Mumbai.
The State Department added Abdul Rehman al-Dakhil to its list of “specially designated global terrorists,” saying he was a senior commander of the group.
The U.S. Treasury targeted Hameed ul Hassan and Abdul Jabbar, who it said were responsible for funneling money to Lashkar-e-Taiba and paying salaries to its members.
“Treasury’s designations not only aim to expose and shut down Lashkar-e Tayyiba’s financial network, but also to curtail its ability to raise funds to carry out violent terrorist attacks,” Sigal Mandelker, the Treasury under secretary for terrorism and financial intelligence, said in a statement, using an alternate spelling of the group’s name.
The designation means all property belonging to the men subject to U.S. jurisdiction are blocked and Americans are prohibited from engaging in transactions with them.
Lashkar-e-Taiba (LeT), or Army of the Pure, is an anti-Indian militant group with historical ties to Pakistan’s top spy agencies. It has been accused of orchestrating numerous attacks, including the 2008 assault in Mumbai that killed 166 people, six of them Americans.