When the Special Inspector General for Afghanistan Reconstruction, an American government watchdog, requested information in June about health clinics in that country funded by the United States Agency for International Development, the aid agency handed over a database with the locations of more than 600 facilities. But investigators quickly noticed something strange about the data: Coordinates for 13 of the clinics were not even in Afghanistan, and others were off by miles. The findings were the latest in a series of reports and letters that the special inspector general has released over the past year and a half that have documented waste, abuse and fraud in government-sponsored programs in that country, often to dramatic effect. Among them were aircraft bought by the United States that the Afghans cannot fly or maintain, troop rosters that cannot be verified and a $335 million taxpayer-supported electrical plant that is rarely used.

Even as United States spending and military involvement dwindle in Afghanistan, some members of Congress and outside groups say it is as important as ever to have an independent watchdog like the special inspector general. Congress created the unusual cross-agency office in 2008 to determine what exactly the government has bought with the more than $100 billion it has spent on reconstruction, and although Congress has reduced annual appropriations for reconstruction in Afghanistan, there is still a little over $15 billion left to be spent.

Pakistani Christians have to face various forms of persecution: It is not only about the blasphemy law

Christians have customarily faced persecution in times past up till now. Even today, there are some countries where being a Christian bears an elevated risk of harsh forms of persecution; despite this majority still cling to their faith.
The Gospel Herald reports about a Pakistani Christian Saba Imtiaz who talked with a Pakistani priest about the worst forms of persecution Christians are going through in Pakistan.
In keeping with what Saba told, Anthony Ibraz, a 31-year-old, Pakistani priest of Karachi, is actively preaching tolerance to his congregation. Despite the fact that Anthony’s own family had to face religion-based persecution including extortion, beatings and facing discriminatory attitudes at school and the shops, he still airs the message of love, peace and tolerance from the pulpit.

“Persecution is not only about the blasphemy law,” he said adding, “There are different kinds of persecutions. There is discrimination, when we go out, in education and jobs … sometimes slavery in Sindh and Punjab. There are people who come to us who say they are educated and capable but they don’t get jobs. The reason is religion.”
“We do stand for our rights, and we raise our voice,” Anthony Ibraz said. “The Christian community or the minorities are more aware now about blasphemy cases and persecution. They are more aware now of sending messages, or to appear in the media. They know what the result could be.”
In the face of the ostensibly never-ending persecution, Anthony Ibraz has clung to his message of patience and tolerance. “Maybe something good will have to come out at some point,” Ibraz said. “At the same time we tell them that this persecution becomes a reason to unite. If we are together, you can do something.”
- See more at: http://www.christiansinpakistan.com/pakistani-christians-have-to-face-various-forms-of-persecution-it-is-not-only-about-the-blasphemy-law/#sthash.6g9XARLQ.dpuf
No comments: Links to this post

How the society should deal with it

New cases of measles that are surfacing across the province have panicked officials concerned who, however, refuse to call it the infection an epidemic.
“The children who contract measles recently are either those who missed out on vaccination or the ones who have been living in IDP camps,” a health department official told The Express Tribune.
Around 1,400 cases have been reported at various health institutions across the province. However, experts are of the opinion that measles is not an epidemic and could have been caused by the influx of displaced people into various parts of the province.
“It happens during disasters like floods and earthquake but it does not mean the disease is carried by the floodwater,” said the official. “Such an outbreak is usually reported from areas where a large group of people live together, like in camps etc.”
Double check
Even though immunisation drives have taken place across K-P, inoculating children against such infections is not enough. Another official said even after a child receives doses against measles, there are chances that the infection may takeover. “A second dose can completely protect the child.”
The cases may be reported amongst children who have been vaccinated only once, added the official. “One should also keep in mind that a successful campaign against measles does not mean the infection has been rooted out.” He added there are chances that the outbreak was caused by those who missed the first dose as well.
When contacted, acting deputy director of the Expanded Programme on Immunization Dr Tahir confirmed the number of cases but maintained it is not an epidemic.
“There are children who missed the vaccination campaign but let me tell you that even if a campaign is going on, it does not mean things are okay.”
He added cases are reported on a routine basis. Tahir informed that around 60 to 70% of the children have been immunised and the rise in the number of cases suggests the remaining children missed the vaccination.
No comments: Links to this post 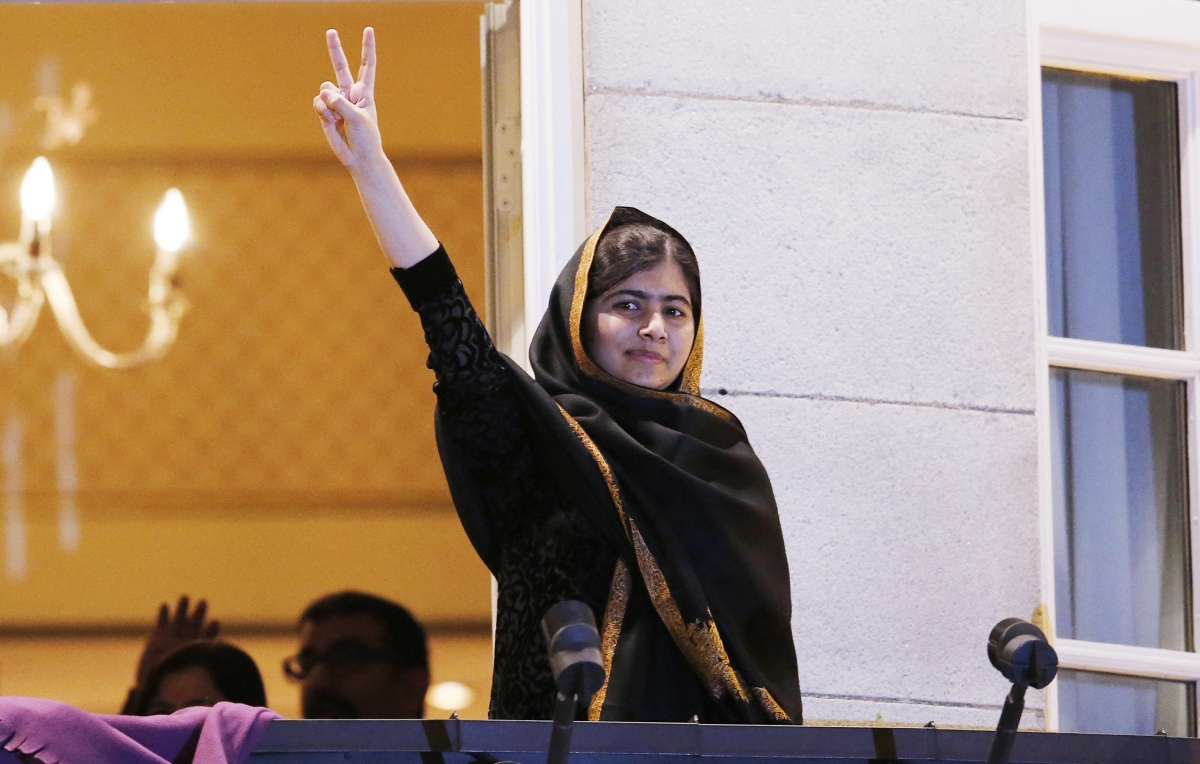 Malala Yousafzai, the youngest person ever to win the Nobel peace prize, has another reason to celebrate after posting a string of top grades in her GCSEs, a set of important exams faced by British teenagers.
Her father Ziauddin Yousafzai said on Twitter on Friday his 18-year-old daughter had achieved six A*s and four As, placing her in the top tier of school kids to take the exam.
After rising to global fame as an education activist after she was shot in the head by a Taliban gunman in Pakistan in 2012, her family resettled in Birmingham in Britain.
Last year she became the youngest person ever to win the Nobel Peace Prize.
Yousafzai, whose own education was disrupted when she was attacked and moved to Britain for rehabilitation, sat her exams two years after most British teenagers take them.
Pakistani media praised her good results.
“Nothing that Malala Yousafzai achieves seems startling any more but she continues to make Pakistan proud," said the Express Tribune, an English-language Pakistani newspaper.
No comments: Links to this post

Imagine a world without kids... empty gardens, vacant swings and see-saws! This is exactly the sentiment, which resonates in Salim-Sulaiman’s new single ‘Khalipan.’
Penned by Amitabh Bhattacharya, the soul stirring single was composed by the music composer duo post the Peshawar school massacre, which claimed the lives of nearly 141 children. Sung by Salim, the song is a tribute to the innocent lives who never returned home from school.
“We all remember the horrific incident at Army Public School, Peshawar where the victims were the tiny kids who actually hid under benches to avoid bullets. This was something that trigged the thought in Sulaiman and me that what if our kids do not come home someday? And that’s the reason why we as artists made the single in memory of the kids who lost their lives to terrorism,” said Salim.
With this, the duo hopes to reach out to the sponsors of such a “heinous” act. “If this single reaches out to even one person who supports this act, we will be successful,” he added.
The song begins with mind boggling statistics stating that more than 200 million children till date have lost their lives to terrorism. The video features both Salim- Sulaiman and ends with the heart breaking line - “The smallest coffins are the heaviest.”
When asked about their expectations from this track, Salim said, “I do not make music for expectations. I do it because I am an artist and I feel about the cause.”
The duo finished composing the song in January 2015 and went to Poland to shoot the same. “We shot the song in April because in the months of February and March, Poland is very cold. Also it was not possible to have an empty town in India so we had to go to Poland,” he explained.
Happy and satisfied with the way in which the song has been shot, Salim is of the opinion that doing an independent project is a little difficult as one requires a lot of funding to shoot the song with grandeur.
Prior to this the duo had released their single ‘Astagfirullah’ on the occasion of Eid. Additionally, Salim also rendered his vocals for a couple of songs in the film ‘Wedding Pulao’ recently.
No comments: Links to this post