Video Report - "He Is Being Played!" Jake Tapper and His Panel Stunned By Trump's Stupidity Dealing With Putin

Video Report - Barnicle: World Leaders Are Laughing At The US | Morning Joe | MSNBC 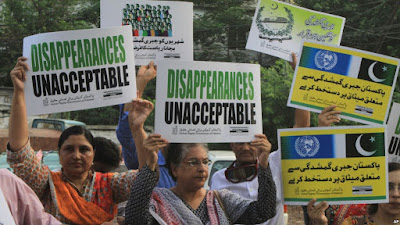 Pakistan People’s Party (PPP) leader Senator Farhatullah Babar has said that during the past six years the commission on enforced disappearances had failed in fixing responsibility.
A meeting of human rights committee of the Senate was held on Monday to discuss the situation of missing persons, persecution and target killings of Hazaras and other human rights issues.
In a statement issued following the meeting, Senator Babar called for making the report of the commission — that worked under late Justice Mansoor Kamal for only one year in 2010— public.
Chaired by Senator Nasreen Jalil the meeting was attended by senators Sitara Ayaz, Dr Jahanzeb Jamaldini, Mir Kabir Shahi, Mufti Abdul Sattar and Farhatullah Babar.
Babar said complete information about the prisoners in 45 internment centre must be placed before the Senate committee so that it could proceed further in the matter. He further that those who had returned homes be encouraged to disclose before the committee with assurances of protection and confidentiality.
Alluding towards the disappearances during the reign of retired general Musharraf, he said the former military dictator had claimed in his biography that his government had captured 689 militants and handed over 369 to the US without trial for bounties totaling millions of dollars.
Musharraf’s show off about these disappearances and getting away with it had set a precedent and now some elements might think that they could get away with this impunity, he said, adding parliament should be informed about the details of those handed over by Musharraf to foreign countries without trial.
No comments: Links to this post

A fellowship at Harvard University to honour Benazir Bhutto which was announced earlier is now accepting applications. 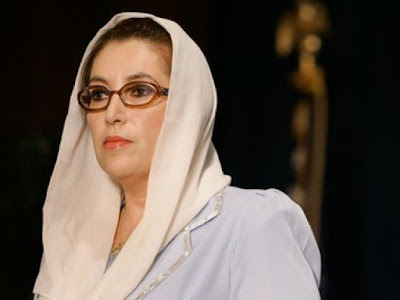 The fellowship has been established by ClassACT (Class Achieving Change Together, www.classacthr73.org), which is an organisation created by members of the Harvard-Radcliffe (HR) Class of 1973 who were classmates of the late twice elected Prime Minister of Pakistan.
The program is housed at the Harvard Kennedy School (HKS). It aims to educate and support mid-career leaders particularly from the Middle East and South Asia, ClassACT shared on their website.
Titled the HKS ClassACT HR 1973 Graduate Leadership Program Fellowship in Honour of Benazir Bhutto, the fellowship will support those accepted into the Edward S Mason Program at HKS.
The HKS has started accepting applications to the Mason Program for the first year of the fellowship.
The advisory board of the fellowship includes Sanam Bhutto, sister of late Benazir Bhutto.
“In college, we were privileged to have Benazir Bhutto, who was to become the first woman to lead a predominantly Muslim country, as a classmate,” said Marion Dry, Co-Chair of ClassACT and Director of the Benazir Bhutto Leadership Program.
“The world needs, more than ever, the kind of leadership that Benazir’s principles inspire,” she further maintained.
Classmate Kathleen Kennedy Townsend, former Lieutenant Governor of the state of Maryland commented, “Benazir arrived at Harvard as a 16-year-old with verve, energy, curiosity and enormous determination. She inspired us with her courage in the face of tragedy, integrity where corruption was rampant, and focus when so many forces could lead to dissipation. We are eager to carry her spirit in our hearts and her legacy at our alma mater”
Jamshed Kazi, Country Representative of UN Women Pakistan and a Fellow at Harvard Kennedy School said, “Benazir Bhutto has been an iconic and inspirational figure for many women — as well as plenty of men like myself
“Bhutto worked against considerable odds to promote democratic principles and boost gender equality initiatives in a patriarchal setting. The launch of the Benazir Bhutto Fellowship is a fitting tribute to her legacy,” he added.
ClassACT is founded on the premise that “it is not too late for us to change the world”. The organisation’s fundamental purpose is to bring together HR73 classmates to address important local, national, and international problems by creating and supporting positive change.
No comments: Links to this post

IT is a case of immense tragedy in its contours, and fairly anomalous in the details. On Sept 4, in the populated area of Landi Kotal in Khyber Agency, about five to six kilometres from the Afghan border, a group of 18 young men were at a popular picnic spot near a mountain stream. Their party was raided by a cohort of over a dozen armed men, apparently from Afghanistan, who kidnapped the entire group and took the men across the border into Afghanistan’s Nangarhar province. One of the abductees, a watchman, managed to escape since he was familiar with the area. It is from him that we have what scant details there are.
However, it has been confirmed that the men are indeed in Afghanistan; the local political administration arranged for a six-member delegation comprising mainly the victims’ families to travel there for negotiations. The initial ransom demand was Rs50m, which was later reduced to Rs10m. But the latter amount remains too much for the villagers to raise, and thus, over a month later, the 17 men are still missing.
In the wake of such kidnappings are left broken families, young wives and aged parents who can only hope and pray for the safety of the abducted men. The latter, in many cases, were the sole breadwinners of their families, raising modest earnings through small-time businesses. Thus, financial catastrophe looms as well. And yet, the only state intervention has been in the travel arrangements to Nangarhar. Do the authorities simply not care about the fate of missing Pakistani citizens? Can a conversation not be opened up through diplomatic channels? Further, it is worth pondering that the site of the kidnapping is close to the well-manned Torkham border crossing. That an armed posse can swoop down and abduct 17 people must raise questions about the state of security. These issues notwithstanding, it is the fate of the abductees that must be made a priority.
No comments: Links to this post

Pakistan - Unemployment and inflation; govt provides no relief to the people

Opposition Leader in the National Assembly Syed Khursheed Ahmed Shah has said that if leaders will invest abroad, then who will invest in Pakistan. He added that the government had totally failed in solving the problems of people.
He was addressing farmers and young people at his residence in Sukkur before leaving for Karachi. The opposition leader said: “Farmers are in poor condition. The young generation is relentlessly looking for jobs. Unemployment and inflation have reached a new high. Gas and power loadshedding have added more troubles to the lives of people. However, the government has made no arrangements or efforts to provide relief to the people. Projects like the Lahore Metrobus, Orange Line and Green Line cannot provide relief to 200 million people.”
Khursheed Shah said that officers should solve the problems of people like servants, not masters. “In this regard, no negligence will be tolerated,” he said. “We will continue to struggle until the problems of farmers are solved.”
In the end, Shah said that people will bring the PPP into power in the upcoming general elections with a heavy mandate. “The PPP, after coming into power, will help the young generation seek better employment opportunities. People should prepare for elections and the elections will be held on time,” the opposition leader concluded.
No comments: Links to this post

Imran Khan a puppet; won’t get anything: Bilawal Bhutto 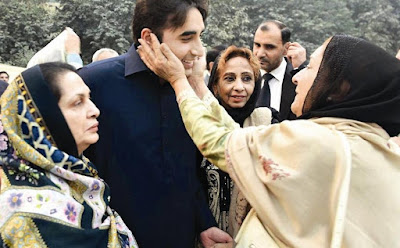 Pakistan People’s Party Chairman Bilawal Bhutto Zardari on Sunday said Karachi’s political situation was odd, as a strange game was being played with the people of Karachi.
He termed the Pakistan Tehreek-e-Insaf chief Imran Khan a puppet and predicted his failure in Karachi’s political arena, just like other puppets in that city. He said the PTI chief would get nothing in Karachi. However, he added, it was the right of Imran Khan to visit Karachi or any other part of the country for his political objectives.
The PPP chairman promised that his party would ensure development of Karachi and come up with a clean leadership in the mega city. “We are struggling to give Karachi a sense of ownership and we know Karachi’s citizens won’t pay heed to puppet politicians,” he said. Like all previous puppets, these puppets would also fail, he added.
Demanding justice in Model Town and Hudaibiya Paper Mills cases, he said former prime minister Nawaz Sharif could no more deceive the nation. Addressing a gathering of party workers at the death anniversary of PPP Secretary General Jahangir Badr, he said that besides Hudaibiya Paper Mills corruption reference, the Model Town killings case should also be opened against the PML-N leaders.
The PPP chief expressed his hope that the court would do justice in the Hudaibiya reference, adding that justice should also be done in the Model Town case, where affected families were still awaiting justice.
Bilawal said Nawaz Sharif was making all efforts to save his skin while spreading confusion regarding Panama case. He said the case of PanamaLeaks was related to Nawaz Sharif and he was trying to make it controversial, adding that the nation could no more be misled by him.
Nawaz is trying to confuse his personal problem of Panama with the chronic issues facing the country to save himself. He said Nawaz would not succeed in his attempts, as the Pakistani people were witnessing whatever was happening. He said Panama is an international issue and Nawaz Sharif would fail in his efforts.
Earlier on Sunday, Bilawal Bhutto said in a tweet that the recent political developments in Karachi were a farce, adding that the city deserves better politics. Bilawal said the PPP had neither left its vision nor changed its mindset. The party is still standing on the same grounds, he affirmed.
Paying rich tribute to the late Jahangir Badr, Bilawal said his entire life reflected the spirit of struggle and sacrifice for democracy. He said Badr never compromised on principles nor did he ever change his loyalty with party and his entire political journey was a beacon of light for the party stalwarts. The gathering was also attended by a large number of political figures, who lauded the struggle of Jahangir Badr for the party and democracy.
http://www.thesindhtimes.com/pak/imran-khan-puppet-wont-get-anything-bilawal-bhutto
No comments: Links to this post