Russia is proving that it is nobody’s fool. And as both it and Washington go back to the future and redraw the Cold War battleground — Pakistan looks all set to benefit. Provided, that is, we are smarter this time around.
For Moscow has come out of the shadows and is adopting a pro-active role in our ’hood. It has this week appointed an honorary consul in Khyber Pakhtunkhwa which borders Afghanistan; reportedly uneasy about the rise of ISIS on the other side. And as an additional move towards this end, Russia and Pakistan have announced (also this week) the setting up of a joint commission on military cooperation to counter this regional threat. This comes hot on the heels of China unveiling plans to establish military bases in both Afghanistan and here.
In other words, the Great Game is about to become interesting once more. After all, on one side is the US who accuses both Moscow and Tehran of actively assisting the Afghan Taliban; and on the other are the Russians who, for their part, contend that Washington has failed to take seriously the ISIS menace.
But most significant is the not so unsubtle shift in narrative that we are seeing. Meaning that what Moscow essentially is saying is this: that the US is harbouring terrorists. For the latter firstly encouraged the NATO war machine to engage in its first non-European mission across our western border and then, after decimating that society, it went off and launched a war of aggression in Iraq. And then once having done the job of unleashing chaos there it turned its attention to Libya and Syria only to ‘return’ to Afghanistan all the while boo-hooing that the country is still in turmoil. That groups such as ISIS that are fleeing NATO bombs in the Middle East consider the Afghan quagmire a firm bet — indicates that terror outfits themselves do not take seriously the US mission next door. Or put another way, they establish their very own safe-havens under American occupation. Thus if we were ever to be so bold, we could accuse Washington of providing cold shelter to those who would overthrow the democratic set-up over here and grab our nukes at the first chance they had. At least this is the fear Washington has been peddling ever since it went into Afghanistan more than a decade-and-a-half ago.
Thus Russian support for Pakistan is a positive development; after all, we are already buying weaponry from it. Moreover, this will likely not give Saudi Arabia cause for protest given that its bilateral ties with Moscow are on the up; with Riyadh even buying arms from the latter. Nevertheless, Islamabad will still have to tread carefully. For in no way do we want to somehow be dragged into the Syrian war. Just as we must be equally cautious and avoid being seen to favour anti-terror cooperation with Russia over fully signing up for the Islamic Military Alliance; the body that was set up to tackle the terrorist threat in the Middle East. But all seems to have gone rather quiet on that front which is itself odd considering that the region is currently in flames due to US misadventures there.
Yet the one takeaway for Washington should be that the so-called Bajwa Doctrine is in full swing. Meaning that the days of scurrying to please the Americans is indeed well and truly over. Because while money talks — there are now plenty of others who are more than willing to wop their wads on the counter and outbid the US.
No comments:

Pakistan's Supreme Court has ruled that former prime minister Nawaz Sharif cannot head the country's ruling party.
The court's decision on Wednesday comes months after Sharif was "deemed unfit to hold public office" over corruption allegations and forced to step down, Pakistan's Dawn news outlet reported.
A subsequent law, known as the Elections Act 2017, was passed by the ruling Pakistan Muslim League-Nawaz (PML-N) party last year, which allowed Sharif to retake his post as party leader despite the charges against him.
In the decision, the court ruled someone disqualified under tenets of the Pakistani constitution cannot head a political party, Dawn reported.
Chief Justice Mian Saqib Nisar ordered the Election Commission of Pakistan to remove Sharif as party head from all relevant records, AFP news agency reported.
"As a result, all steps taken, all orders passed by Nawaz Sharif are also declared to be as if they had never been taken," Nisar said, as reported by Reuters news agency.
Rising instability
Political analysts said the decision raises serious questions about political stability in Pakistan. "It has created a serious crisis for [PML-N] ... and it has also created uncertainties about the direction of [the] Pakistani political system," analyst Hasan Askari told AFP.
Askari said Senate elections, scheduled for next month, may be postponed as a result of the court's ruling.
The PML-N controls Pakistan's lower house of parliament. Winning control of the Senate would allow the party to change the constitution to make Sharif eligible to hold office again when the party runs in national elections, expected to be held later in 2018.
Raza Ahmad Rumi, an editor at the Daily Times Pakistan, said while the decision "was not unexpected", it was "a miscalculation by [the] powers-that-be".
"Nawaz Sharif is likely to gain more sympathy and his party more votes in the coming elections," Rumi wrote on Twitter. Meamwhile, members of PML-N accused the court of bias, with Information Minister Marriyum Aurangzeb saying the judiciary was "only targeting one person", Pakistani newspaper The Express Tribune reported. A three-time prime minister, Sharif has denied allegations of corruption.
He has been accused of failing to declare monthly income amounting to more than $2,700 from a company owned by his son. He also appeared in an anti-corruption court last October to face separate corruption charges.

Sharif family is a master of lies, deceit and hypocrisy, says Bilawal Bhutto

Pakistan Peoples Party (PPP) Co-chairperson Bilawal Bhutto Zardari has said that the Sharif family is the master of lies, deceit and hypocrisy, according to messages posted by the PPP chief on the social media website Twitter.
Apparently criticising the decision of the ruling Pakistan Muslim League-Nawaz (PML-N) to bring its tussle with the judiciary into the parliament, Bilawal warned that the Sharif family was playing a dangerous game. 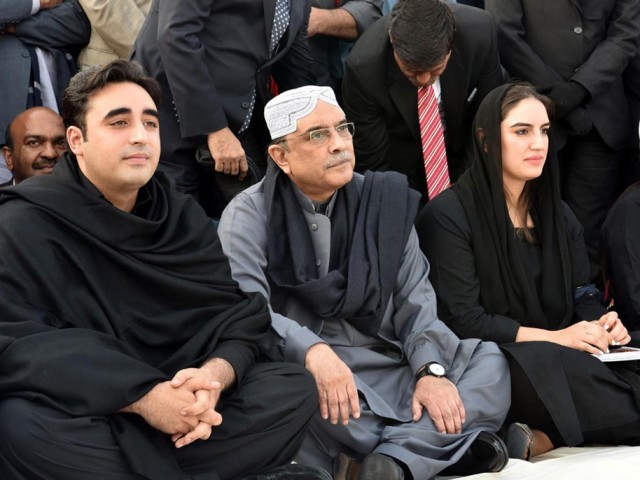 PPP chief Bilawal Bhutto-Zardari with his family. PHOTO: FILE PHOTO
Pakistan Peoples Party (PPP) Co-chairperson Bilawal Bhutto Zardari has said that the Sharif family is the master of lies, deceit and hypocrisy, according to messages posted by the PPP chief on the social media website Twitter.

BilawalBhuttoZardari Retweeted Majid Agha
This is what conspiracy and judicial victimization looks like. Sharifs dictating judegments against SMBB & AZ, blackmailing judges is justice while Panama decision based on international scandal is called conspiracy. Sharifs are masters at this game. Lies, decite and hypocrisy.

BilawalBhuttoZardari Retweeted Majid Agha
Sharifs want to dictate judgements to the judiciary again. We will not let them. They don’t understand Pakistan has changed. We will not tolerate such attacks or blackmail on our judiciary.

“We will not let them. They don’t understand Pakistan has changed. We will not tolerate such attacks or blackmail on our judiciary,” Bilawal Bhutto-Zardari reiterated.


“We will not let them. They don’t understand Pakistan has changed. We will not tolerate such attacks or blackmail on our judiciary,” Bilawal Bhutto-Zardari reiterated.
Bilawal media talk
While speaking to media in Lahore on Wednesday, Bilawal stated that it was PML-N who got Benazir Bhutto and Asif Ali Zardari punished as Shehbaz Sharif and Saifur Rehman forced the judges to pass a verdict. He also stated that he thinks PML-N wants to impose their decisions on the judiciary.
Saying he doesn’t support institutional conflicts, he said parliament and the Constitution are the two most supreme institutions of the country.
Bilawal further stated that if judicial reforms are needed, they shouldn’t be a controversial reform. “You need to sit with lawyers, civil society and others to form laws and amendments,” said the PPP chairman.
Saying Punjab’s current politics disheartens him, Bilawal said his party wants to make Lahore “progressive and peaceful.”
He further stated that it’s a joke with the nation when the longest serving Prime Minister of the country [Nawaz Sharif], who still enjoys government in the federation, “acts as if he’s in the opposition.”
No comments: