On June 2, Ifran Masih, a Christian who cleaned sewers in Sindh’s Umerkot, was allowed to die because Dr. Jam Kambar of the district’s civil hospital found him “too filthy” to treat. Kambar claimed he was fasting and could not sully himself by associating with uncleanliness in the holy month of Ramzan. Two other Muslim doctors, Dr. Yusuf and Dr. Allahdad Rathore, also shrank piously from saving Masih’s life.
Masih was serving the Muslim population of Umerkot during the sacred month by clearing an obstruction that had been reported by local residents. After he descended into the manhole in the scorching summer heat, he reportedly fainted after breathing the toxic gas rising from the sewer. Seeing him fall, two other sanity workers—also Christian—jumped in to save him but also lost consciousness.
Masih’s family carried his unconscious body to the hospital where the doctors were too pious to touch him. Then something even more unforgivable happened. After Masih’s brother Pervaiz cleaned his body, doctors gave him an oxygen tank to help in his resuscitation. That tank turned out to be empty, resulting in Masih’s untimely death.
Muslims claim special piety during the holy month of Ramzan when Allah revealed His religion to them. Sacred posturing is annually revealed when Muslims experience profiteering in food markets, even as many shirk the workplace over hunger pangs in the name of Allah. Umerkot has showcased this hypocrisy more starkly and revealed commonalties between the ultra-pious and ultra-violent.
Muslim terrorists too boast a superior brand of Islam as an excuse to kill their fellow men—Muslims and otherwise—in the holy month of Ramzan. Osama bin Laden made a point of killing Muslims during the holy month, but when the dastardly Americans killed him in Abbottabad, many pious Muslim were the ones most offended by his death. Now Abubakr al-Baghdadi of the Islamic State is continuing in bin Laden’s footsteps, and the misinformed fasting masses are paving the way for his brand of pious tyranny.

The US, Not Pakistan, Should Be Thanked For Restoration Of Temple In Karachi Which Was Used As A Toilet 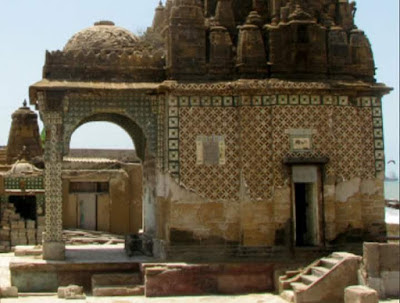 The Temple Had Come to be Used As A Public ToiletSecularism in Pakistan is a joke. India’s ‘Aman ki Aasha’ brigade – which releases its ‘love for Pakistan’ hormones during cricket matches between the two nations – may ignore this reality, but even the government of Pakistan shows no respect for any religion other than the official one.This is why minorities in Pakistan have only two choices if they want to live a respectable life: 1. Convert, or 2. Leave the country. If they do not do that, they will either live their lives in their pitiable state or get killed by fundamentalists.One classic example, among the many, of the government’s apathy towards minorities is how the government ignored the appalling state of a very famous ancient temple.The Varun Dev temple is located in Manora in Pakistan’s Karachi district of Sindh. Compared to other parts of the country, Karachi is ‘secular’ and Hindus are more in number in Sindh than anywhere else in Pakistan.The temple is approximately 1000 years old and is dedicated to Lord Varuna (the lord of the seas in Hinduism). It is probably the only temple and certainly the oldest and largest dedicated to the Hindu god in the entire Indian sub-continent.Obviously, therefore, the temple should be a heritage symbol for Pakistan. The truth is shocking. It was reported by Daily Times in 2008 that a part of the temple was being used as a toilet. Yes, a toilet!“When the temple was open for worshippers, a festival of ‘Lal Saien Varun Dev’ was celebrated by the Hindu community in the 1950s. Now the mandir’s rooms and premises are used as a toilet. This is a big insult to the Hindu community. Nobody respects the rights of the minorities,” Jivraj, the then caretaker of the temple, told the Daily Times.The temple is located on the Manora Island, which brings it under the jurisdiction of the Pakistani Navy. So the Daily Times tried to contact the military estate officer (MEO) to inquire about the ownership of the mandir, but they got no response.And when Jivraj wrote to the Manora Cantonment Board (MCB), he was told that there are no records.Not one government official in Pakistan came forward to restore the temple in spite of the report. Then in 2016, the US Consulate in Karachi intervened.Using the US Ambassador’s Fund for Cultural Preservation, the US decided to help in saving the heritage temple from disuse and destruction. Eight years had already passed from the time the Daily Times reported about it and the US intervention.By now, the temple had reached an even worse state. The walls were crumbling and project director for restoration, Dr Asma Ibrahim, said that if they removed one wrong brick, the whole temple would collapse.The news of the restoration of the temple was published and spread widely across Pakistan. To many of the ‘secularists’ in India, this was a noble gesture from Pakistan. What all of them failed to note – or did not note deliberately – is the fact that the temple’s restoration process is not because of Pakistan but because of the US.Who funded the project? The US. Who is spearheading the efforts? The US. What did the Pakistani authorities do for the last eight years since the temple’s pathetic condition was reported? Nothing.The last time that the temple had a proper ritual to the deity was sometime in 1950s. Ever since, illegal construction, vandalism and humidity of the region kept battering the temple. Government officials of the country did nothing.On the contrary, Indian government preserves every monument, from the ancient to the modern, symbolizing the rich history of the country.

British police on Monday named two of the three attackers who killed seven people near London Bridge late on Saturday and injured dozens more, and said one of them was previously known to the security services and he is Pakistani-born British man.

London's Metropolitan Police said one attacker was Khuram Shazad Butt, aged 27. Butt was previously known to police and domestic spy agency, MI5 and was a British citizen who had been born in Pakistan, the police said.
“However, there was no intelligence to suggest that this attack was being planned and the investigation had been prioritised accordingly,” police said.
Butt appeared in a Channel 4 documentary entitled “The Jihadis Next Door” about British extremists that was broadcast last year, British media reported.
The second attacker was named as Rachid Redouane, aged 30, who also went by the identity Rachid Elkhdar and was not known to police. Redouane claimed to be Moroccan and Libyan.
Police said they were still working to establish the identity of the third attacker.
“I would urge anyone with information about these men, their movements in the days and hours before the attack and the places they frequented to come forward,” national counter-terrorism police chief Mark Rowley said in the statement.
“At any one time MI5 and police are conducting around 500 active investigations, involving 3,000 subjects of interest.
“Additionally, there are around 20,000 individuals who are former subjects of interest, whose risk remains subject to review by MI5 and its partners,” he said.
Police said they now had 10 people in custody after releasing two of the 12 people arrested on Sunday.