#coronavirusinpakistan - #COVID-19 – can it shake us into action?

Pakistan, a nuclear power, albeit one where nearly 30 percent live by or under the poverty line, supports one of the youngest populations of the world with nearly 3 million entering the job market every year amidst a paltry annual GDP growth rate that hovers around the 3 percent mark. The financial budget consistently runs in a deficit (by some account close to a double digit deficit), periodic external account pressures invariably force successive governments to enter into compromising (on sovereignty) debt agreements with institutions such as the IMF, and one without a (decision-making) seat or special status on any of the key global forums or institutions, such as the G-20, FATF, WTO, IMF, WB, WHO and others. Today, in the midst of the twin crises that we face – the coronavirus pandemic and an imminent meltdown of the Pakistani economy – it is imperative that we re-examine some of the foundations of Pakistani society, understand why they are failing us, and fight for a fairer and more efficient nation.
The absurdity and the cruelty of our health system is now apparent to all like never before – a state health system plagued by corruption, lack of transparent management, an in-disciplined bunch of young doctors and paramedics and a case of sheer neglect spanning over decades by now. As tens of millions of Pakistanis are losing their jobs and incomes as a result of the pandemic, many of them are also losing the option to take care of themselves, should they or any of their family members falls sick. That is what happens when healthcare does not get its due allocation in annual budgets and the right of everyone to basic healthcare is not guaranteed. As we move forward beyond the pandemic, a key legislation that we need to pass should be on mandatory minimum (constitutional) budgetary allocation to healthcare in future national budgets with a guaranteed right to healthcare to every man, woman and child – available to people employed or unemployed, at every age.
Rich people do indeed get the virus and rich people do also die due to it. However, it is also true that poor and working-class people are suffering higher rates of sickness and are dying at much higher rates than the affluent; and this despite a skewed testing percentage whereby very few poor are tested in any case in the total number of COVID-19 tests carried out.
COVID-19 is vicious and ironically, rather opportunistic in attacking people with pre-existing conditions and weakened immune systems. For a wide variety of socio-economic reasons, it is the poor and the working class in this country who fall in exactly this category, as they suffer higher rates of ailments like stress, depression, blood pressure, diabetes, asthma and heart diseases – and thereby are the most vulnerable to the virus.
Since the data we have is limited and the testing is fairly narrow-based, we do not even know the actual damage that may exist in this category. Poor people in general have lower life expectancies than the affluent, and this tragic unfairness remains even truer with regard to this pandemic. Further, a pandemic situation or not, there are simply some hard realities of life that one has to contend with and there is no escaping them. While doctors, minister and chief ministers tell us that we should isolate ourselves and stay at home, the reality is that most working people do not have such an option. When you are living paycheck to paycheck, and you lack medical coverage, staying home is not an option. If you are going to feed your family and pay the rent, you have to go to work. And the people for whom it is necessary to earn living on a daily basis, it means leaving your home and do work that requires them to interact with other people, who may or may not be carrying the virus. Anyway, having said all this, the good news is that if there is any silver lining in this horrible period of pandemic and the looming economic collapse that we are experiencing, it is that finally it is beginning to dawn on the majority to rethink the basic bedrock of Pakistan’s value system.
Should we continue to use obsolete styles of management and governance that are rife with incompetence, greed, political-opportunism, and conflict-of-interest or should we go forward in a new direction? The choices we face today are the same choices that perhaps Singapore’s Lee Kuan Yew faced back in 1959 or President Franklin D Roosevelt grappled with in the 1930s, which convinced them that in order to get to a truly developed society, economic rights must be considered human rights. This was true more than 80 years ago and it remains true today.
The new Pakistan that we fight for should look inwards, end starvation, ensure basic necessities for all and more importantly, do so by ensuring education and skill development on war footing in order to become competitive in the global economy. The country must undertake strong industrialisation and construction programmes that generate sufficient employment while at the same time end homelessness. At the end of the day, it is the government’s duty to see to it that our communities are free of pollution in our air and water, and that we come across as standing with the responsible nations in combating the existential threat of climate change. For leaders, love and respect comes only from performance and while there is no denying that bringing about fundamental changes in a society and a country tend to be herculean tasks, they at least need to set the direction right. It is now time for us to think ahead and showcase how this pandemic has made us wiser and going forward, what can we do differently to change our fortunes, post COVID-19. In Nelson Mandela’s words: “It always seems impossible until it is done. Let’s go to work and get it done.”

Kavita Kumari, a 13 Years old, Hindu girl abducted, raped, converted. Tell me if you are a human. if you have a sister or daughter of this poor girl's age & someone forcefully take her like this? If you were helpless like her family is. Will you still be silent or justify this? https://twitter.com/johnaustin47/status/1259972642481700865 …

312 people are talking about this

This is, however, not the first incident where the ‘Mithoo mafia’, as the Mian Mithoo’s goons are commonly referred to, has been instrumental in carrying out abductions and forced conversions of several Hindu underage girls in the area. Prior to this, he was accused of abductions and forceful conversions of one Hindu named Mahek Keswani and two other underage Hindu girls Raveena (13) and Reena (15), who were abducted from the Ghotki in Pakistan’s Sindh on the eve of Holi. The girls were later forcefully converted and married off to older Muslim men.
Similarly, Rinkle Kumari, was abducted and forced to convert to Islam, and marry a young Muslim man named Naveed Shah under his supervision. Rinkle Kumari, the daughter of a local school teacher Nand Laal, was a mere teenager at the time of her abduction. Nand Laal had allegedly fled to Lahore soon after accusing Mian Mithu of the abduction and forced conversion.
Almost all the sordid sagas of the Hindu teenager’s abduction and marriage in Pakistan’s Sindh province is said to be masterminded and supported by Mian Mithu.

Mithoo is feared by the local Hindus as they accuse him of kidnapping and forced conversions of Hindu girls. The minority Hindus of the area claim that Mithoo provides protection to those who kidnap underage Hindu girls and forcibly converts them to Islam before marrying them off to their kidnappers. Further, he also wields his political power to influence legal processes in case families of kidnapped girls decide to go to court.
Mian Mithoo, the chief of Bharchundi mosque is accused of systematically carrying out the kidnapping and forced conversions of underage Hindu girls in the area.

Last year, temples belonging to the minority Hindu community were vandalised and violence was unleashed against Hindus in Pakistan’s Ghotki after a principal Notan Das had allegedly made some ‘blasphemous’ remark. The violence had broken out after a student accused the school principal Das of making ‘blasphemous’ remarks.
In a twist to the whole incident, a news report in Pakistani media outlet Naya Daur had stated that the attacks against the Hindu community were pre-planned by the goons of notorious Radical Islamic leader Mian Mithoo. 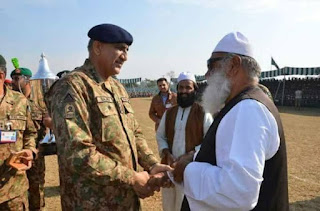 School principal Notan Das had reportedly saved an abducted Hindu girl by giving refuge to her and the attack against him was an attempt to cover up the crime by Mian Mithoo’s goons. 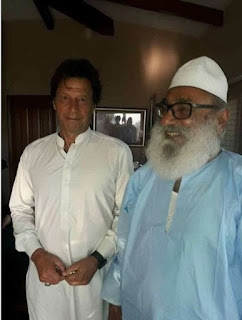 As of 2016, 117 cases had been registered against the Islamic cleric who is allegedly known to be a close aid of Pakistan’s PM Imran Khan and the Pakistani general Qamar Javed Bajwa. In Pakistan, Hindus have many times reportedly taken to the streets demanding the arrest of Mian Mittoo.