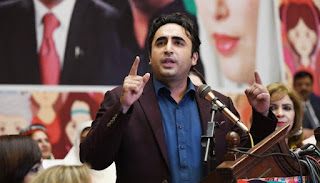 Pakistan People’s Party chairman Bilawal Bhutto has pledged that the PPP will fully support the Aurat March and said no maulana, politician and anchorperson can stop women from holding the march.

Speaking at a Punjab PPP women convention in Lahore on Thursday, he said Benazir Bhutto had always fought against terrorism with courage. The people who say that women would not march should hear loud and clear that they will march and no one can stop them. This path was shown by Benazir Bhutto. The PPP is standing shoulder to shoulder with women of this country and we demand the government provide protection to each and every march and the people threatening women be arrested and cases registered against them. Women are not begging rather they are seeking their constitutional rights. This is Pakistan of Mohtarma Fatima Jinnah, Shaheed Mohtarma Benazir Bhutto and Pakistan of every woman the country. This is not a Pakistan for the conservatives. The PPP is a party of prosperity for the people of Pakistan. Women know the best about the economy of the country because they manage homes. Women will take the PPP’s message of prosperity to every nook and corner of this country.
Bilawal said the PPP has always raised voice for women empowerment and it will continue supporting women n future as well. “I regard every Pakistani woman, every Pakistani mother as my mother because every son wants to serve his mother,” he said.
He said that Benazir Bhutto's name comes to mind whenever the rights of women are discussed in Pakistan. “Islam gives rights to women and Pakistan People’s Party is the most prominent party with regards to women's rights. Our 1973 Constitution gives equal rights to the women of Pakistan. We want equal rights for labourers, growers and women,” he said, adding the PPP has always raised voice for women rights.
Highlighting the steps taken by the Pakistan People’s Party for women welfare, Bilawal said the PPP has given rights to women as it is the only party which increased quota for women in every field.
The PPP gave Pakistan the first woman prime minister in the history of Muslim world whereas the first woman judge was also appointed by the PPP. Land was given to women by the PPP and a Lady Health Workers project was introduced by it as well.
Moreover, he said projects like Benazir Income Support Programme was also initiated by the PPP that was hailed by the world. BISP has brought about economic revolution for women.
The people who oppose this programme do not want to spend money on women. This is the reason they oppose this programme. This programme was replicated in the other countries of the world. The PML-N and the PTI wanted to end this programme because they do not want women to prosper. There were other programmes like Waseela-e-Taleem, Waseela-e-Sehat under the BISP. Now Imran Khan has changed the name of this programme and made it Ehsaas Programme.
The Sindh government is organising poor rural women and providing them assistance and training. Around 1.5 million women are benefiting at the moment and about 0.4 million women have been given interest-free loans. Agricultural women workers have been recognised as labourers in Sindh with all labour rights.
https://www.thenews.com.pk/print/624324-no-maulana-politician-or-anchor-can-stop-aurat-march-bilawal
No comments: Links to this post

Islamabad High Court (IHC) Chief Justice Athar Minallah on Friday asked a petitioner challenging Aurat March posters and slogans to explain how they go against the teachings of Islam, before throwing out their petition for being non-maintainable.
Justice Minallah sought the explanation while hearing arguments regarding the maintainability of a plea challenging the slogans raised by participants of the Aurat March.
During the hearing, the petitioner’s lawyer told the court that they were not against the Aurat March or the demand for women's rights, but were against the slogans and posters being used by the participants.
The lawyer claimed that the posters and slogans were against Islamic teachings. To this, Justice Minallah asked the lawyer what he had brought on record to support his claim.
“Did you see the clarification published today, which was issued [by the organisers] yesterday?” Justice Minallah asked the petitioner.
"They are raising their voice for those rights which are not being given to them," the judge told the petitioner.
“Where did they speak against Islam?” asked the judge.
"Their posters are inscribed with the rights which are given to them under Islam," he argued. He also asked the petitioner whether they could evaluate Aurat March slogans unilaterally.
“The first person to accept Islam was a woman,” Justice Minallah noted during the hearing. "They [the organisers] said in the press conference that they were demanding the rights given to them in Islam."
“When they have clarified their point of view in the press conference, then how can we interpret [their slogans] differently?” asked the judge.
He noted that the press conference had been published in all media outlets.
Justice Minallah also noted that the Aurat March has yet to happen and the petition seems to have been filed prematurely.
At this, the lawyer objected saying that they came to the court to explain their point of view, but the CJ was instead telling them his own.
“See the slogans attached with the petition,” the lawyer requested the court. At this, Justice Minallah told the petitioner that he should take the Aurat March constructively.
He once again asked the petitioner how he could interpret the slogans without giving thought to its context.
After hearing the arguments, Justice Minallah adjourned the hearing and reserved his verdict on the maintainability of the petition.
Early evening, Justice Minallah threw out the petition, deeming it non-maintainable and recording his observations in an eight-page order.
https://www.geo.tv/latest/275922-when-did-the-aurat-march-organisers-speak-against-islam-wonders-ihcs-cj-minallah
No comments: Links to this post