#Pakistan: Will general elections be held on time?

The growing rift between ex-PM Nawaz Sharif and Pakistan's powerful army has cast a dark pall over the upcoming elections. Some accuse the generals of trying to influence the vote to keep Sharif's party out of power.
Uncertainty and unpredictability loom large as Pakistan's general elections draw closer. The latest conflict between the ruling party and the nation's powerful military erupted over former Prime Minister Nawaz Sharif's recent statement on the involvement of Pakistan in the 2008 terror attacks in the Indian city of Mumbai.


With Sharif's assertion, the already poor civilian-military relations in the country have deteriorated even further. Despite widespread criticism, Sharif has stuck to his guns and refused to retract his contentious remarks.


The comments put the former PM in the crosshairs of pro-military politicians and television commentators, with most of them calling for Sharif to be charged with treason. "Sharif should be charged with Article 6," opposition leader Imran Khan said, referring to the clause of Pakistan's constitution that seeks death for committing treason.


The issue reveals the serious friction and deep-seated distrust between those that support the country's democratically elected civilian government and others that side with the army.


The controversy comes in an election year, as Pakistan is expected to go to the polls at sometime in July after the current parliament's tenure ends at the end of May. Many Pakistanis, however, fear that the election schedule may be derailed, given the current tense political situation.
For now, officials say these fears are unfounded. "Everything is set and the general election will take place on time," Altaf Ahmed, director of public relations at the Election Commission of Pakistan (ECP), told DW. If the prime minister dissolves parliament on May 31, the ECP would have 60 days to conduct the election.


"Pakistan can't delay its 2018 general election because it has to answer the international community. So I guess the election will be according to the scheduled time," Tahir Mehdi, an election expert, told DW.


Former Senator Farhatullah Babar, who previously served as press secretary to ex-President Asif Ali Zardari, believes there are "undemocratic forces" in the country that want to delay the elections, "but they will not succeed."


Still, the fragile state of the South Asian nation's democracy has been a source of worry for many Pakistanis. Since the country's founding in 1947, Pakistan's democratic history has been tainted by decades of military dictatorship, with the army overthrowing elected governments every few years.


Ruling from the shadows


In 2013, for the first time in its history, the country witnessed a smooth transition of power from one civilian government to another. This triggered hopes that the country had managed to put an end to its military coup-filled past, and was on track to becoming a true democracy.


But the manner in which Sharif was recently expelled from his premiership sparked suspicion that the army was behind his ouster. Sharif, who has been Pakistan's prime minister three times, had to step down ostensibly because his family was implicated in a corruption case. However, many believe he has been targeted because of his willingness to lock horns with the army, and assert civilian authority over the military.


In addition to losing his position as premier, Sharif has been barred from leading his party and also from contesting any election ever. Their attempt to banish Sharif from Pakistani politics, some observers say, shows the institutional power of the nation's military, indicating how the generals no longer need to undertake a coup d'etat and impose martial law in order to exercise power. Instead, they have mastered the art of ruling the country from the shadows.


Against this backdrop, experts point out that there are fears over whether the upcoming elections will be free and fair. "If the elections are not free and fair then it would not be accepted as an election because it should be transparent," said PML-N's Zafar ul Haq.


The elections will be crucial in determining Pakistan's future trajectory, as the country finds itself confronting a challenging security landscape. The United States, under President Donald Trump, has also been tough on Islamabad, expressing its frustration over Pakistan's failure to target terrorist networks in the region.


At the start of this year, Washington also decided to suspend security assistance to Islamabad. This has pushed Pakistan to increasingly turn toward China for much-needed financial and diplomatic support.


China, on the other hand, has been Pakistan's close regional ally for decades and has invested heavily in the country in recent years. Currently, Beijing is spearheading a nearly $60 billion (€50 billion) China-Pakistan Economic Corridor (CPEC), which is part of its gigantic Belt and Road Initiative (BRI). China also wants to minimize India's influence in the region by supporting Pakistan, a policy that analysts don't think will drastically change in the near future.


"The army would not leave any stone unturned to keep Sharif out. In short, the military establishment does not accept the supremacy of the civilian political parties in Pakistan because they want to call the shots in the country," said Dashti. 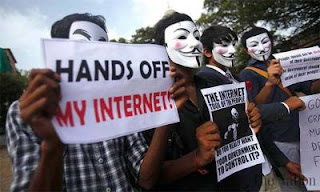 Here in Pakistan, journalists and civil society activists do not need to imagine themselves on the wrong side of a faded and frayed Iron Curtain to understand that Big Brother is watching. This is something that they have long known.
In the past, uniformed men might suddenly appear out of the blue to offer a stern warning. Or else it was quite feasible to return home to find one’s home ramshackled. Either another form cautioning or else the men in the shadows had come and taken whatever it was they deemed to be of value. The mess left behind was, oftentimes, a calling card of sorts.
Presently, these threats still remain. But news ones have emerged; rather in tandem with advances in technology. Social media, especially, has made it harder for state apparatuses the world over to exercise total control over the free-flow of information in or out of nations. This has been seen most recently in the absolutely unjustified use of Israeli military force against unarmed Palestinians. Indeed, the lifeless body of Laila Anwar al-Ghandour, an eight-month-old baby girl who died of tear-gas inhalation, has gone viral to become the face of the Gaza carnage.
Yet social media as well as other means of electronic communication also have a dark side. When, for example, these are used by government agencies to spy on the citizenry — they may then all too easily transform into tools
of repression.
Pakistan, a member of the Human Rights Council no less, has appeared on the radar of Amnesty International as a country of grave concern. According to its four-month investigation — Human Rights Under Surveillance: Digital Threats against Human Rights Defenders in Pakistan — a sinister campaign is underway to electronically spy on activists. Extreme measures include: logging passwords; intercepting texts and other messages; activating web cam and microphone functions to record conversations; as well as stealing hard disk data.
To be clear, nowhere in its report does the global rights watchdog implicate Pakistan’s military establishment. Instead, it simply and bluntly calls on the state to come good on its oft-repeated pledges to safeguard human rights; while also criminalising enforced disappearances. Be that as it may, many journalists and civil society activists know who they believe to be behind such moves. Especially when it comes to those who have been targeted over pro-Indo-Pak peace initiatives or who have taken a critical line against the security apparatus.
That the breathing space is rapidly shrinking should be of grave concern to everyone; including the state itself. Media owners and their editors have come under increasing pressure to drop this or that article; with news channels possibly being discouraged from giving due coverage to the Prime Minister’s recent press conference. None of which is in the national interest. For this is authoritarianism by another name.

Judging by the pictures, the ex-PM Benazir Bhutto’s daughter does not seem bothered by the stardom. In fact, she seems to enjoy it quite a lot.
Pakistan Peoples Party (PPP) had, earlier this year, announced that Aseefa would be contesting the general elections from 2 different constituencies.