Editorial: #Pakistan - No ordinary abduction - Javed Iqbal's stance that missing persons issue has been 'politicised' is most unfortunate 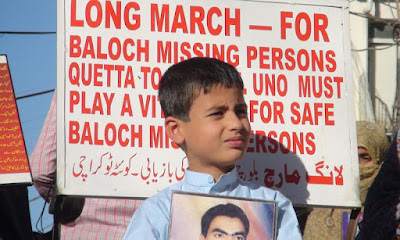 There can, there must, be no two views about enforced disappearances.
It is an abhorrent practice, a hallmark of some of the world’s most despotic regimes that is calculated to terrorise the people into silence. And any appearance of downplaying the gravity of this illegal act only emboldens the perpetrators.
One could argue, therefore, that retired Justice Javed Iqbal, chairman of the Commission of Inquiry on Missing Persons, took a most unfortunate stance on Tuesday while briefing the Senate Standing Committee on Human Rights. According to him, the issue of missing people “has always been politicised” and that “the situation was not as bad as it is made to sound”.
To support his contention, Mr Iqbal cited the claim of Baloch activist Mama Qadeer that 40,000 Baloch were missing, although, he said, the commission had been given no details of their disappearance; that several ostensibly missing individuals in one part of the country had been located elsewhere in Pakistan; and that a number of them may be incarcerated in Afghanistan.
The fact is, unlike an ‘ordinary’ abduction, enforced disappearances always have a political dimension. Whether Gen Pinochet in Chile from 1973 to 1990, President Abdel Fattah al-Sisi in present-day Egypt, or the Indian state against the Kashmiris — to cite but a few examples — it is a tactic employed by repressive governments that demand total compliance and carte blanche to operate.
Certainly, there can be a difference over the numbers of the missing, but the numbers are irrelevant: that it happens at all is an abomination.
The theatre of enforced disappearances has spread from the remote areas of Balochistan to the urban locale of the capital itself; earlier the targets were political activists and journalists; then bloggers — indeed anyone espousing progressive ideas — began to be picked up.
That means, there are multiple, credible eyewitness accounts of such abductions. Moreover, while Mr Iqbal offered various reasons why we should not be unduly concerned by these happenings, and even defended internment centres run by the security establishment, the commission headed by him has failed to hold anyone publicly accountable for disappearing citizens.
It was during Iftikhar Chaudhry’s tenure as Supreme Court chief justice that tough questions were asked of security forces personnel who, it is alleged, are significantly involved in enforced disappearances. In recent months, Chief Justice Saqib Nisar has also displayed a welcome resolve to hold state elements accountable for the crime.
Nevertheless, Mr Iqbal’s criticism before the Senate Committee of successive governments’ lethargy over the issue is valid, and the committee is correct in approving the idea of criminalising enforced disappearances.
Although the right to due process is guaranteed by the Constitution — a right manifestly violated when people are disappeared — such an action by parliament will convey an unequivocal message about where the people’s elected representatives stand on the matter.
No comments: Links to this post 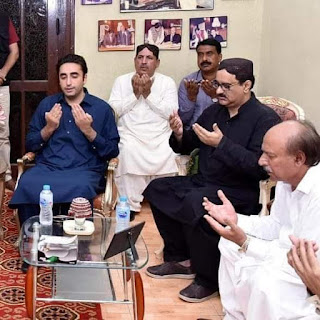 The PPP chairman met with the brother and son of the late leader.
He paid tribute to late Isran saying “Isran remained loyal to the party through thick and thin. He took part in every struggle for restoration and strengthening of democracy.
PPP Sindh President Nisar Ahmed Khuhro, MNA Khursheed Junejo, MPAs Suhail Anwar Sial, Genhwar Ali Khan Isran, President PPP Larkana chapter Abdul Fatah Bhutto, ex-MPA Mohammad Ali Bhutto also accompanied the PPP chairman.
Isran passed away earlier this month at the age of 75 following a prolonged illness.
He was born on December 11 in the year 1943 in Khairpur Joso village of Larkana District.
The veteran politician served the Sindh province four times as the Member of Provincial Assembly (MPA) after being elected in 1988, 1990, 1993 and 2013, respectively.

Punjab’s new information minister, Islamist politician Fayaz-ul-Hasan Chohan, has announced a ban on “vulgar” movie billboards in the Pakistani province, angering those who fear the growing influence of hardliners under new Prime Minister Imran Khan.
Since Khan’s party appointed him last week, Chohan has caused a number of rows, including with his visit to the grave of a man sentenced to death for killing the governor of Punjab in 2011, and with critical remarks about Nargis, a popular Pakistani singer and actress.
“If any vulgar billboard is found at any cinema in Punjab after three days, there will be a fine in first place, and if any one didn’t comply, that cinema will be shut down,” Chohan told a public meeting in the eastern city of Lahore.
“Is there any humanity that you print half-naked women and put them on big billboards?” he said.
Khan’s election victory in July was helped by strong support from Islamist parties. Chohan joined Khan’s Pakistan Tehreek-e-Insaf, Justice Movement from the Islamist party Jamaat-e-Islami Pakistan.
“It’s pure moral policing,” the left-leaning politician and rights activist Ammar Rashid said on Twitter.
No comments: Links to this post

#OurProphetOurHonour - Netherlands - #Dutch cartoon contest and protests in #Pakistan: All for show? 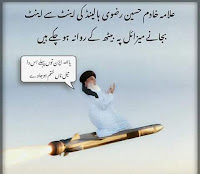