India to bypass Pakistan on the road to Central Asia

India, Iran and Afghanistan have agreed to develop a modern port outside the Gulf as well as road and rail links that would allow New Delhi and Kabul to bypass a hostile Pakistan and strengthen trade between south and central Asia. 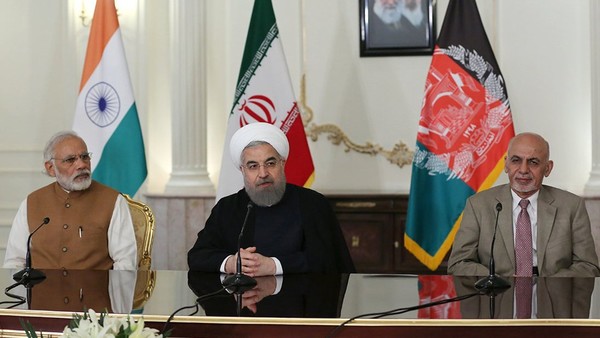 Narendra Modi, Indian prime minister, said in Tehran his country would spend $500m to develop Iran’s Chabahar port on the Gulf of Oman and related infrastructure in a “milestone” deal that would boost growth, spur the unhindered flow of commerce in the region and give landlocked Afghanistan “an assured, effective and a more friendly route to trade with the rest of the world”. The Chabahar project — one of several plans in the region to develop trade corridors for oil, gas and other goods — has been mooted for the past 14 years. Its revival now has been prompted by the easing of international sanctions against Iran and growing frustration among Afghans and Indians with Pakistani obstruction of cross-border trade. “It changes the whole economic geography of the region,” said Maharaja Krishna Rasgotra, a former Indian foreign secretary, “because it gives us, via Iran and Afghanistan, direct unobstructed access to central Asia, to Russia and Europe”. Most Afghan trade — principally imports funded by foreign aid and opium smuggling — passes through the Pakistani port of Karachi. But Pakistan simultaneously supports and hosts the Afghan Taliban rebels fighting the government in Kabul and its western allies. Ashraf Ghani, Afghan president, said he wanted to prove that “geography is not our destiny”. In another snub to Pakistan shortly before the port agreement, President Barack Obama deployed US drones killed Mullah Akhtar Mansour, the Afghan Taliban leader, in a missile attack on Saturday in the Pakistani province of Baluchistan, which borders both Iran and Afghanistan. The idea of a route from south Asia to Afghanistan bypassing Pakistan has long been a problem for Pakistan’s security planners, who have become accustomed to using access to Karachi as a lever during more than 30 years of Afghan conflict. Pakistani officials, however, claimed to be sanguine about Chabahar. In the words of one foreign ministry official, India’s $500m commitment was “peanuts” compared with China’s promise to invest $46bn in a network of railways, highways and pipelines to connect western China to Gwadar port in Pakistan, which is less than 200km to the east of Chabahar. “Gwadar will handle China’s traffic to and from the Arabian Sea. It’s a much bigger venture than Chabahar,” the official said. “The cash is with China,” said another official from the Pakistani finance ministry. Independent analysts, however, said Chabahar could dilute Pakistan’s influence in the region. “Pakistan is losing out here on Afghanistan and possibly even central Asia,” said Hasan Askari Rizvi, a commentator on politics and security. Ayatollah Ali Khamenei, Iran’s supreme leader, has thrown his weight behind Chabahar and described India as “one of the emerging and progressive economies in the world”. Iran’s reform-minded newspapers also welcomed the accord. It may blunt the attacks on Hassan Rouhani, the centrist president, by hardliners who say his international commitment to scale down Iran’s nuclear activities in exchange for a partial lifting of sanctions has failed to attract the promised foreign investment. Mr Rouhani said the Chabahar deal was not aimed against any particular country, although some commentators in the domestic media suggested that the “Indo-Persian” accord was indeed a lesson to Pakistan, whose Sunni Muslim leaders are close to their co-religionists in Saudi Arabia and therefore sometimes regarded with suspicion by Shia-majority Iran.
No comments: Links to this post

U.S. Strike on Taliban Leader Is Seen as a Message to Pakistan