Not without reason is Pakistan considered one of the most dangerous countries in the world for minorities. Hidden underneath the more publicised and shocking incidents of massacres and mob lynchings are incidents of ordinary bigotry. A general sense of superiority and entitlement in the majority, discrimination in educational institutions and workplaces are so common that they by their very prevalence have gained a high degree of acceptance. This low-level bigotry keeps intercommunity tensions simmering constantly and all it takes is one spark for the situation to boil over and turn into yet another massacre, burning or lynching. The Kalash people of Chitral, a tiny minority of a few thousand individuals, have become the most recent victims of mob mentality that took over their Muslim neighbours due to a single but crucially important incident.
On June 16, a teenage Kalash girl, who had recently converted to Islam and moved in with a Muslim family, returned home, stating that she was forced to convert to Islam. However, it was assumed by the local Muslim community that she had been taken back by force. A clash resulted when a large group of Muslims gathered around the home of a neighbour where the girl was present. The local police eventually intervened in order to disperse the crowd and prevent bloodshed. A clear message has been sent to the Kalash community and other minorities in this country: forced conversion is a one-way street and there is no going back. As they slowly dwindle in numbers by moving to safe havens abroad or merging with the majority either by choice or by force, our religious minorities continue to be made to feel increasingly isolated and unsafe. From the law enforcement agencies that are slow to take action against religiously-motivated hate crimes, to clerics who are quick to call for action against ‘blasphemers’ and a public that is at best indifferent to the suffering in their midst, there appears to be little recourse available to our minorities when made to suffer indignities such as the one witnessed in the Chitral incident.

Tension in Pakistan town over conversion of Kalasha girl to Islam

The conversion to Islam of a 14-year-old girl from Kalasha community, Pakistan’s smallest religious minority, has sparked clashes between majority Muslims and a few thousand remaining members of the animist tribe.
Nestled in the picturesque Chitral valley, the Kalasha people, who follow an ancient animistic religion and number only around 3,000, had claimed that the teenage girl was lured to convert to Islam.
However, a district official on Friday said that the girl has recorded her statement before the court that she converted out of her own free will.
On Thursday, clashes were reported between Muslims and the Kalasha people after the girl returned back to her family amid reports that she was lured and coerced to convert to Islam.
According to eye witnesses, a mob of few hundred Muslim men attacked a house in the Kalash tribe’s valley of Bumburate in the northern district of Chitral after the girl returned and police had to fire tear gas to disperse the crowd.
Chitral Deputy Commissioner Usama Waraich said that the situation was now under control and the issue has been resolved as both local Muslims and Kalasha people have agreed to respect the girl’s decision.
However, some elders of the Kalasha community still claim that the girl was forcefully converted and demand an impartial probe into the matter. 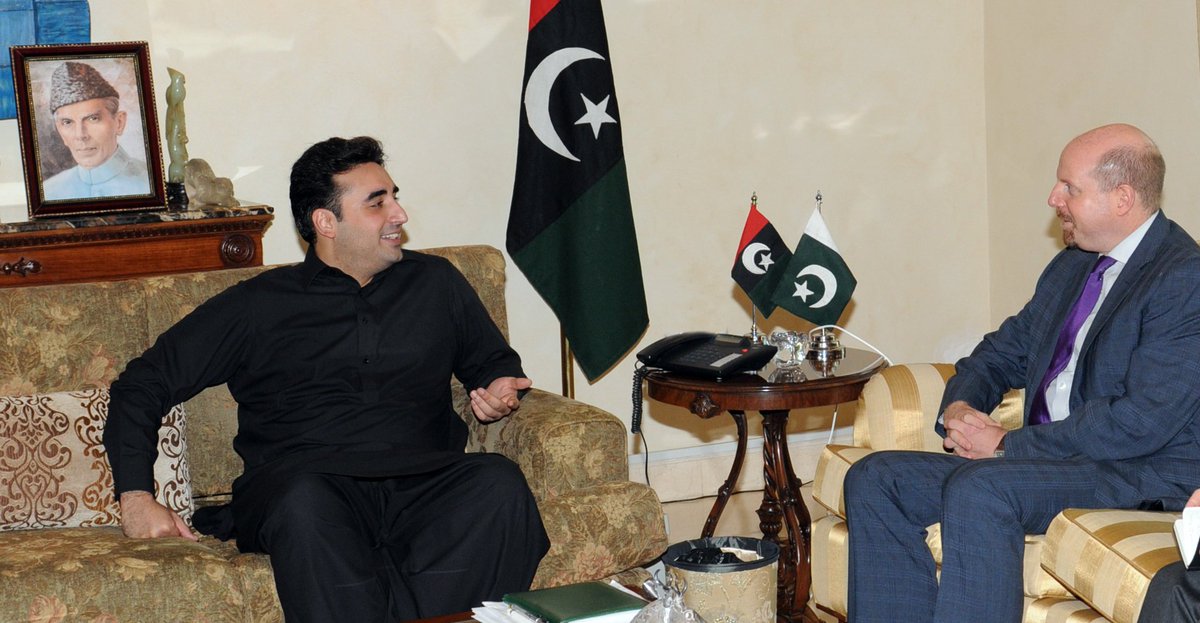 Consul General of the United States in Karachi Brian Heath called on Bilawal Bhutto Zardari Chairman Pakistan Peoples Party at Bilawal House today.
Bilawal Bhutto Zardari and the US Consul General exchanged views on matters of mutual interests and discussed the cordial relations between two countries.
https://mediacellppp.wordpress.com/2016/06/17/consul-general-of-the-united-states-in-karachi-brian-heath-called-on-bilawal-bhutto-zardari/
No comments: Links to this post

In 2016, the major foreign policy challenge Pakistan is beset with is reduction in its conceptual size, both regionally and internationally. The challenge is emanating from certain grievances that can be divided into three parts. The first part is against India, the second part against the US and the third part against the world.
Against India, Pakistan’s first grievance is that India is overplaying the terrorism card, as Indian Prime Minister Narendra Modi did on June 8 while addressing the US Congress, and by doing so India has superimposed the issue of Mumbai attacks that took place in 2008 — blamed on non-state actors of Pakistan — on the issue of Kashmir lingering on since 1947. Second, India has made a deliberate attempt to counterbalance the port of Gwadar strategically by helping Iran financially develop its port of Chabahar, also located in the Gulf of Oman. Third, India has penetrated Afghanistan’s economy at the expense of Pakistan by investing in Afghanistan’s reconstruction. Fourth, on May 15, India has tipped the regional balance of ballistic-missile power in its favour by successfully test-firing its anti-ballistic missile in the Indian Ocean. Collectively, India has made efforts to dwarf Pakistan regionally, and it has been encircling Pakistan from the southwest.
Against the US, Pakistan’s first grievance is that the US does not respect Pakistan’s sovereignty, and misses no chance to violate it, especially by resorting to drone strikes. Second, the US has not yet appreciated the sacrifices given by Pakistan’s soldiers, officers and civilians in making the military operation Zarb-e-Azb against the Taliban as part of war on terror successful. Third, by killing the head of the Afghan Taliban Mullah Akhtar Mansur in Balochistan on May 21, the US has sabotaged Pakistan’s efforts to promote peace talks between the Afghan Taliban — many of whom have taken refuge in Pakistan — and the Kabul government, sponsored by the world. Fourth, the US deliberately avoids drone strikes on the head of the Tehreek-e-Taliban Pakistan, Mullah Fazalullah who has sought refuge in Afghanistan, and who controls the hordes of terrorists wreaking havoc on Pakistan. Fifth, the US has disturbed the balance of power in South Asia by offering defence cooperation facility to India. Sixth, the US has supported India in the nuclear sphere and not Pakistan. Collectively, the US has enhanced the vulnerability of Pakistan.
Against the world, Pakistan’s first grievance is that the world values Pakistan’s relevance in the region just in the context of Afghanistan. Second, the world has not yet sympathised with Pakistan on the discovery of Kulbhushan Yadav, a serving Indian naval officer, caught in March in Balochistan on spying charges. Collectively, the world has left Pakistan on its own.
The package of these salient grievances poses a major foreign policy challenge to Pakistan. The thread common in these grievances is that these are related more to the military half than the diplomatic or civilian half of Pakistan. The military half seems to have overwhelmed the diplomatic half as far as Pakistan’s foreign policy and the ensuing challenges are concerned. To put it straight, either the foreign office is irrelevant or it is dysfunctional. It is apparent that Pakistan seems to have taken to heart the grievances reflecting reduction in its perceived size regionally and internationally. The worst side of the argument is that, in response to these grievances, Pakistan is in the process of imposing isolation on itself, instead of reaching out to India, the US and the world. These grievances seem to have exhausted the nerves of Pakistan, which has now taken refuge in the lap of China.
In response to the drone strike of May 21, on June 9, China had to ask the “international community to respect Pakistan’s sovereignty and territorial integrity.” The statement exuding solemn intent issued by China is replete with six serious implications. First, Pakistan is not an independent country that has to bank on external help to safeguard its sovereignty and territorial integrity. Second, after more than 60 years of its formation, Pakistan has not reached the stage of maturity from where it can make other countries — whether they be India or the US — listen to it. Third, Pakistan’s relations with the US are now onward less bilateral and more multilateral subject to China’s approval. Fourth, in case of the next drone strike or any interference from across the Afghanistan border — or any other border — interpreted as the violation of Pakistan’s sovereignty and territorial integrity would be tantamount to provoking China directly into the consequent attrition or confrontation. Fifth, Pakistan has brought China to counter the US and its international allies in the region. Sixth, Pakistan is no more tolerant to the war on terror spearheaded by the US and backed by the world at large. This is a very serious turn of events.
In principle, Pakistan should not have asked China to issue such a statement, or China should not have jumped into the foray, as this was a hide-and-seek game going on for the past 12 years — exposing often the complicity of Pakistanis despite all hue and cry — and was taking the last breath. Afghanistan is a complex war theatre, and the Pak-Afghan border is quite intriguing to understand and equally difficult to predict. Whereas the statement foists permanence, the ground situation is in a state of flux. On June 11, a 14-minute audiotape of al-Qaeda leader Ayman al-Zawahri has surfaced online pledging allegiance to the new leader of the Afghan Taliban, Mullah Haibat ullah. It means that al-Zawahri is alive and can be found sooner or later. On June 12, Pakistan and Afghanistan exchanged fire at Torkham border. Hence, today, Pakistan’s major foreign policy challenge is how to avoid confrontation with the US and its allies, even if India is excluded from the list of US allies. The civilian half of Pakistan must interfere in this development and make arrangements to retract the statement.