#PPP not in favour of selecting another PM thru in-house change: Bilawal

Chairman Pakistan Peoples Party (PPP) Bilawal Bhutto Zardari has said that his party wants free, fair and transparent election in the country and does not want to select another prime minister through in-house change. “The institution (army) should not be involved in the economy of the country. If the economy of the country is moving in right direction then this should not be questioned from us but it should be asked from the common man, laborers and small shopkeepers. Million of people have become jobless due to economic polices of the Pakistan Tehreek-e-Insaf (PTI) government," the PPP chairman expressed these views while talking to media persons after chairing a meeting of party core committee on Friday. Answering a question, Bilawal said, “We do not want to go from one selected prime minister to another prime minister but we want a democratic government through free, fair and transparent election in the country. I can see with certainty that by next year Imran Khan will not be the prime minister." he added, “We will have a new prime minister next year." He said that the situation of the economy of the country has become worst due to puppet and selected government. He said that the PPP would struggle for economic rights of the people. He said that agenda of the PPP is to make common people economically strong. Answering another question, Bilawal said that the Jamiat Ulema-e-Islam-Fazl (JUI-F) did not inform the Rahbar Committee about Plan-B and Plan-C in detail as well as about meetings with Chaudhry Pervez Elahi and Chaudhry Shujaat Hussain. “The Rahbar Committee was not informed in detail about Fazl's talks with the Chaudhry brothers and Plan-B and Plan-C of the Azadi March," he said. He said that the PPP fulfilled its promises which were made with JUI-F chief Maulan Fazlur Rehman regarding Azadi March. “It was our stance from the day one that we will only participate in the Azadi March which has been successful. I also twice participated in it," he said. In response to a question, Bilawal said that Asif Zardari has not been allowed to meet his personal physician for the last six months. He said that Zardari has not applied for bail. Answering another question, he said that the party has launched mass mobilization campaign and its future agenda would be presented on the PPP's founding day in Azad Jammu and Kashmir where the party will hold a rally. He said that reorganization of the party is being made and new party office-bearers would be announced on the founding day in AJK. Bilawal said that Occupied Kashmir has been transformed into a huge jail. He said that the PPP would not stop raising its voice for the people of Kashmir. 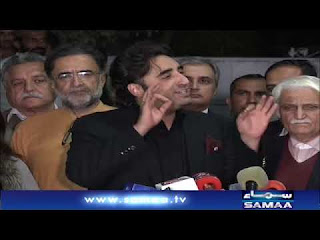