Why students in Pakistan, like in JNU, are raising azadi slogans

As students of Jawaharlal Nehru University (JNU) in New Delhi are protesting against a steep hostel fee hike, their counterparts in Pakistani universities seem to be mirroring them.
A video of some students of Pakistani universities chanting ‘azadi’ slogans went viral on social media a few days ago. They were protesting at the Faiz Literary Festival held on 19 November in Lahore. 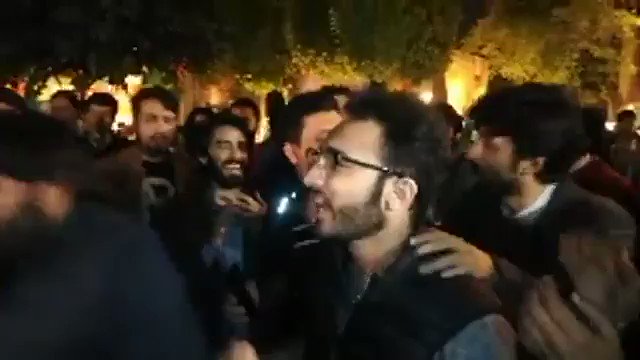 291 people are talking about this

Azadi chants were raised in India, too — in 2016 by former JNU student and CPI leader Kanhaiya Kumar and others.
The students at the literary festival in Pakistan were protesting against alleged government interference in colleges, fee hike, budget cuts and lack of student housing. The students are demanding the restoration of student unions, “de-securitisation” of campuses, end to harassment, among others.
“There have been budget cuts in the public education sector, which means no scholarships, fee hikes, raised costs of transportation, etc,” Tooba Syed, a Pakistani student and activist, told ThePrint.
The students seen protesting on 19 November are members of the leftist Progressive Student Collective. A bigger protest — Student Solidarity March — has been planned on 29 November to be organised by Progressive Students’ Federation (PRSF).

Nida Kirmani@nidkirm
Don't just say 'I wish these students well' and 'I hope they are successful in their struggle.' Come out and stand with them on November 29th and help amplify their voices! #StudentsSolidarityMarch 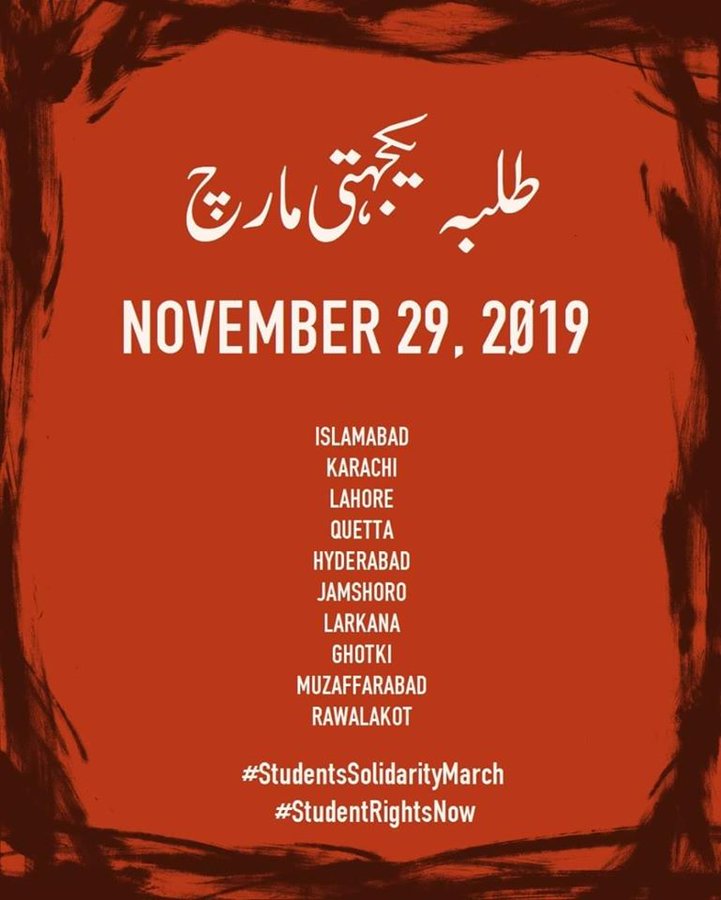 72 people are talking about this
“The marches that will be held across the country are for students’ right to unionisation, and free and quality education for all, among other demands,” said Syed.
“We are marching against the system which labels us as ‘Terrorists’ for demanding clean water on campus. Puts us behind bars for opposing the dictatorship of administration on campus. We demand our right to exist with dignity,” PRSF tweeted.

PRSF@ProgStudentsFed
We are marching against the system which labels us as "Terrorists" for demanding clean water on campus. Puts us behind bars for opposing dictatorship of administration on campus. We demand our right to exist with dignity.
Poster By: @jaquelintzin#StudentsSolidarityMarch 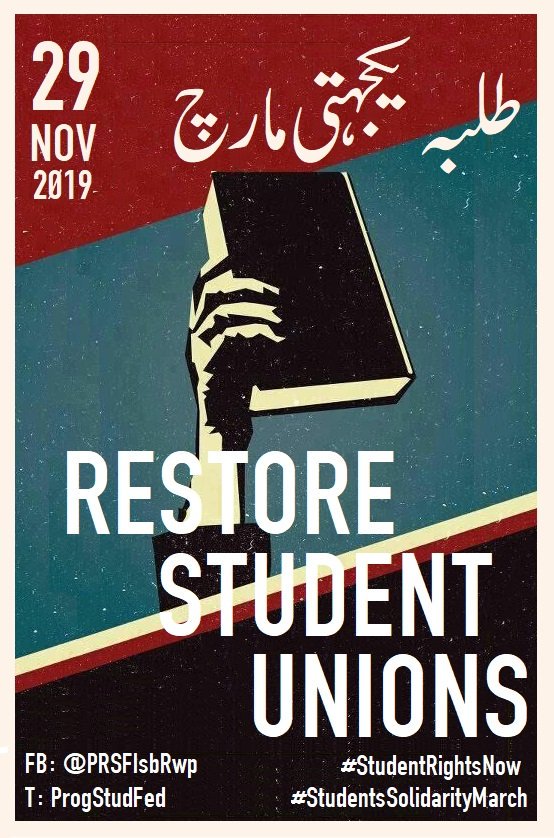 18 people are talking about this
The PRSF was referring to an incident this week in which at least 17 students of Sindh University, Jamshoro, were booked under sedition charges for allegedly raising anti-Pakistan slogans.

Ammar Rashid ☭@AmmarRashidT
13 University of Sindh Jamshoro students including 4 @ProgStudentsFed members, have been charged with sedition for protesting for clean water. This criminalization of students, especially in Sindh & Balochistan, is unacceptable. #StudentsSolidarityMarch #StudentRightsNow 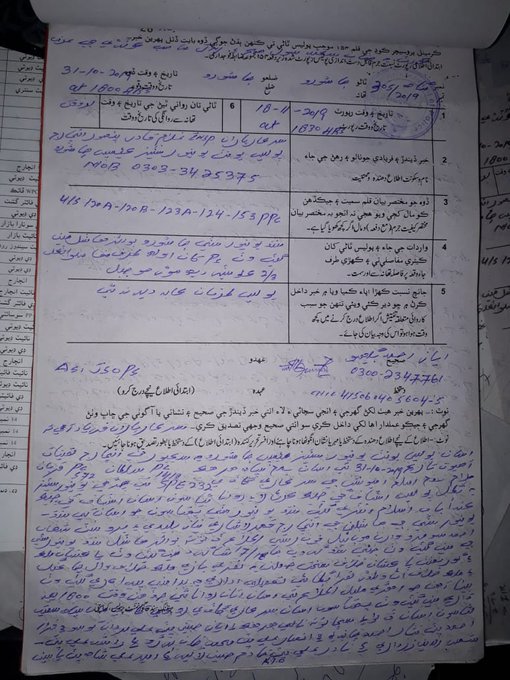 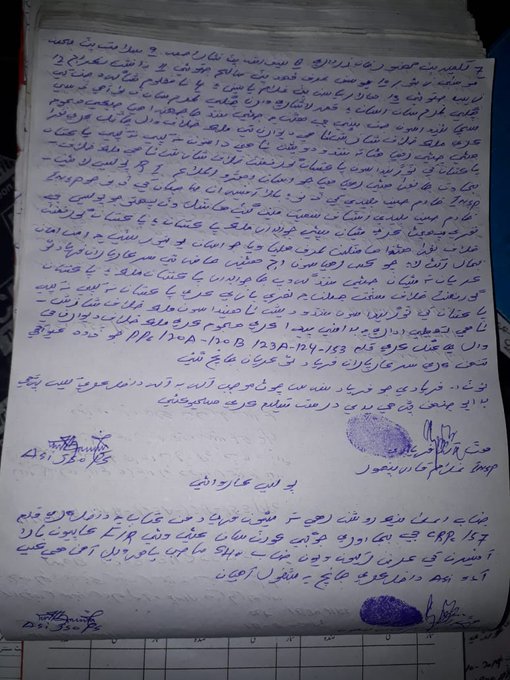 142 people are talking about this

While the video of the 19 November protest has garnered a lot of attention on social media, this is not the first time such as protest was held — a similar protest was held last year in 16 different cities.
According to a report in the Asian Marxist Review, several progressive student organisations from all over Pakistan formed Student Action Committee to demand the restoration of student unions, representation of students in management and increase in the education budget.
According to the students, the Imran Khan-led PTI government had left “educational campuses and students abandoned, dejected and directionless”, the report stated.
https://theprint.in/world/why-students-in-pakistan-like-in-jnu-are-raising-azadi-slogans/325015/
No comments: Links to this post


Ashiq Jatoi, a senior journalist representing a TV channel, Sindh TV, had never thought that while reporting on miseries of the poor, kidnappings and police encounters, he would himself become a victim one day. He was named in several criminal cases, including terrorist activities and attempted murder. 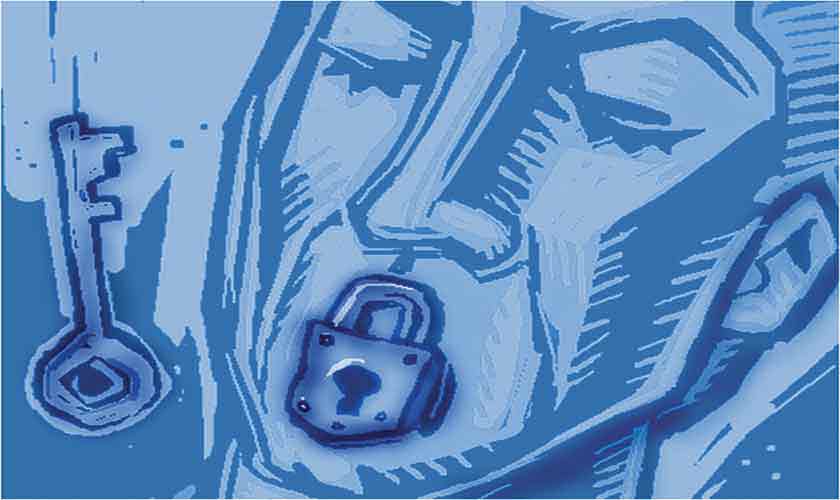 A day after five cases in Sindh and KP, two more cases emerge in Upper and Lower Kohistan
The total number of polio cases across the country has touched 102, including nine vaccine-derived cases after two cases were reported in Upper and Lower Kohistan, Khyber Pakhtunkhwa.
In spite of tall claims by the government and several anti-polio drives, there has been no let-up in the polio cases across the country, as only yesterday five cases were reported in Sindh and KP. These two provinces are among the worst-affected regions, witnessing a spike over the recent months.
Poliovirus was found in the sample of a girl child in Tehsil Pattan of Kohistan. Her samples were sent to the national institute of health in Islamabad on October 27. Similarly, the same virus was found in a five-year-old girl child in Tehsil Dasu of Upper Kohistan.
FIVE CASES IN SINDH AND KP:
On Friday, three cases were recorded in Sindh and two in Khyber Pakhtunkhwa. The first case was a 36-month-old female from Sakran in Shaheed Benazirabad, Sindh. She had received three doses of routine immunization and seven doses of supplementary immunization.
The second case was a 12-year-old male from Karachi’s Keamari Town. He had received three doses of routine immunization and seven doses of supplementary immunization. The third case was a three-month-old female from Lakki Marwat in Khyber Pakhtunkhwa. She had received no polio drops.
The fourth case was a 30-month-old female from Kotri in Jamshoro, Sindh. It is not clear whether she received any dose of the polio vaccine. The fifth case was a 10-month-male from Wazir in Bannu, Khyber Pakhtunkhwa. His immunization record was incomplete.
According to an Emergency Operation Centre (EOC) for Polio: “Lakki Marwat and Bannu have become high-risk districts for polio cases in 2019, as 15 and 24 polio cases were reported in both the districts, respectively. Polio cases from Lower and Upper Kohistan have been reported for the first time this year.”
This week, the Gates Foundation pledged $1.08 billion and, along with other development partner organizations and governments, the meeting got total pledges worth $2.6bn, including $160 million announced by Dr. Mirza on behalf of Pakistan to eradicate polio in the world.
Polio remains endemic only in Pakistan and Afghanistan. The number of wild poliovirus cases stood at 77 in Pakistan and at 19 in Afghanistan as of Oct 29 this year. The corresponding figures during the same period last year were six for Pakistan and 19 for Afghanistan. However, the authorities show resolve, again vowing to enhance their efforts.
“We have conveyed to the international donors that we are developing consensus among all provinces to enhance our vaccination campaign with a new strategy. We need to give new confidence to the entire team as we had controlled poliovirus in the past and we can do it again.”

#Pakistan - #LAHORE’S AQI WORST IN THE WORLD ONCE AGAIN

Lahore, the provincial capital of Pakistan’s Punjab province, on Thursday once more topped global rankings for the city with the worst air quality, with monitors showing an average ‘hazardous’ Air Quality Index of 335.
Residents of the capital of Pakistan’s most populous province woke up again to the sight of a haze covering their city, with residents complaining of sore throats, itchy eyes and other ailments linked to inhaling toxic material through the smog that has increasingly become a regular fixture.
While the average AQI for the entire city stood at 335 around noon, parts of the city with individual air quality monitors showed the figure rising as high as 763, which posits a PM2.5 of nearly 900 ug/m3—the equivalent of smoking nearly 40 cigarettes.
While smog is not a new phenomenon in Pakistan, it has taken on greater urgency this year amid ever-worsening air quality that is particularly unhealthy for children, the elderly and the infirm. In 2007, the Lahore High Court ordered authorities to prepare a smog response action plan to overcome the health crisis. The Punjab Environment Protection Council, however, adopted a plan that utilized a modified AQI classification system, which claims a PM2.5 rating of 60 is ‘satisfactory’ even though the U.S. AQI adopted by much of the world declares it ‘unhealthy.’
PM2.5 refers to atmospheric particulate matter that has a diameter of less than 2.5 micrometers, so small that they can only be detected with an electron microscope. These fine particles, which can come from various sources including power plants, motor vehicle emissions, and agricultural burning, last longer in the air than heavier particles. This increases chances of them being inhaled by humans and animals, where they can bypass the nose and throat and penetrate deep into the lungs. The air pollution worsens during winter, emerging as smog, due to temperature inversion, which produces a layer of warm air that traps air pollutants.
Experts and observers have urged the government to adopt a more robust plan to tackle smog, including shutting down schools when the smog levels reach hazardous levels to prevent children from suffering the worst effects.
It is advised that so long as smog persists, the elderly, children and the infirm should stay indoors with the windows closed. Doctors also say people who feel the affects of smog should drink plenty of water, rinse out their eyes at least once an hour, and wear face masks if they have to travel outside.