In a polarized world, we need Sufi to bridge gap, Bilawal Bhutto Zardari 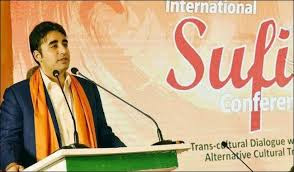 Chairman Pakistan Peoples Party Bilawal Bhutto Zardari has said that now as the world becomes increasingly polarized, today we need the Sufi, more than ever before. We need that universal language of the mystic to unite us. “To bridge the gap across religions, cultures and people. To remind us that at our very core, we are all one;  we are all the same,” the PPP Chairman stated while addressing 2-day International Sufi Conference organization by Sindh Culture Department at a local hotel here today.
Scholars on Sufism from twelve countries were invited to the Conference to share Sufi pearls with a carefully selected audience. Chief Minister Syed Murad Ali Shah, PPP Sindh President and Minister for Food Nisar Ahmed Khuhro, Minister Culture Sardar Ali Shah and others also spoke on the occasion.
“Let me begin by welcoming our foreign scholars and other distinguished guests who have travelled to be a part of this conference. When scholars of your stature and your beliefs sit together, and deliberate, it brings me great hope for the future of humanity,” he said. 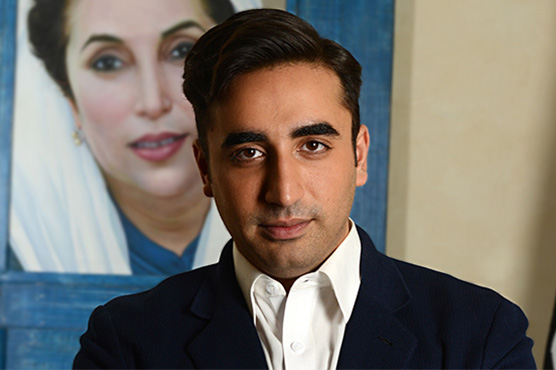 Chairman Pakistan Peoples Party Bilawal Bhutto Zardari has condemning Afghan forces shelling on Pakistani territory at Chaman border.
In a statement, the PPP Chairman expressed concern and grief over the martyrdom of children and women along with other innocent Pakistani citizens.
He said such incidents were occurring due the absence of a foreign policy of the Nawaz Sharif government adding that situation in the region is worsening due to the country having no full-fledged Foreign Minister since over four years.
Bilawal Bhutto Zardari expressed sympathy and solidarity with the families of the martyred and those injured in the Afghan shelling and firing.

Pakistan - Ehsanullah (Terrorist) and our crisis of education

An education system based on dialogue among multiple political actors in Pakistan is our best bet of ever producing thinkers who may find a viable way out of our crisis.
Liaqat Ali alias Ehsanullah Ehsan’s recent confessional statement made headlines for the now clichéd reference to foreign sponsorship of Pakistan-based terrorist outfits. Linked to this were details about the nature of the right-wing militancy we confront today and the state institutions we rely upon to fight it.
For instance, Liaqat Ali said he was a public-sector college student in Mohmand Agency when the TTP formed in 2008. This, coupled with the gory lynching of a student at Mardan University, makes it obvious that the genesis of our contemporary crisis cannot simply be pinned on the madrassa system. Ours is a crisis of education in general.
Today’s public education infrastructure was set up during colonial rule. By now, Thomas Babington Macaulay’s infamous note is quite well known for advocating a system that produced good colonial subjects — who could then serve the state bureaucracy.
The religious movements, mutated versions of which haunt us today, had first emerged in northern India around the same time, in the late 19th century. Associated with seminaries in Deoband, Rai Bareli, Lucknow and Delhi, their central concern was safeguarding religion in the private domain against a secular public sphere (economy and statecraft) that was fast coming under colonial control. Imparting religious education thus became a tactic toward this end.
Regardless of internal differences, these movements were united in their rejection of ‘modern’ education offered at institutions like MAO College of Aligarh, set up by modernist Muslim reformer Syed Ahmed Khan. Thus compared to the modernist Muslim subjects graduating from the aforementioned — revivalist and reformist seminaries were producing men of a very different (Muslim) subjectivity.
And it didn’t take them long to enter the public domain of politics — during the Khilafat movement. With the emergence of Syed Abu’l Ala Maududi’s Islamist project, multiple Muslim subject positions existed, each with its own understanding of religion’s role in state and society, by the time state control was transferred to the natives in 1947.
Though, at that time, modernists controlled public education institutes — Islamists like Maududi also targeted them to disseminate their message among those who would be assuming future leadership roles in state bureaucracy and economy. The traditionalists, meanwhile, continued imparting religious education at seminaries, the number of which increased manifold in later years.
But the public domain of Pakistani politics also included actors representing minority religions or whose politics were rooted in ethno-nationalist, class — or gender-based identities, rather than in religious identity. Yet instead of managing this diversity by constituting democratic pathways to power — in the post-Partition years, those controlling state institutions used the Islamists and traditionalists to crack down on diversity of all sorts, meanwhile, projecting their (modernist) identity onto society.
This was a time when the modernist state elite was equally averse to Bengali, Pukhtun, Baloch and Sindhi nationalists; the Communist Party; and Islamists like Maududi. Yet failure of three decades of top-down attempts to popularise the modernist project — as well as lack of workable framework vis-à-vis centre-province as well as cross-border relations — wrought change. Thus those controlling state institutions began courting both Islamists and traditionalists to legitimise crackdowns on nationalists and leftists, while rallying urban public opinion behind a hawkish foreign policy.
General Zia ul Haq and his contemporaries were products of this three-decade long process, whose imprints still feature on a Pakistani political spectrum that has firmly shifted towards the centre-right.
Had there existed a constitutional framework with democratic pathways to power — competing political actors would have been forced to take mandates to the public, thereby positioning the latter as arbiter of political destiny.
In terms of public education, no particular actor therefore could have used this as a tool to disseminate their views, to the detriment of others. Instead, multiple actors would have been led to engage in rational dialogue while designing the public education system. It’s likely that the resultant framework may not have been fully conducive to nurturing critical thinking. But it would have been, and could still be, our best bet of ever producing critical thinkers, rather than technicians with a nationalist subjectivity devoid of the historical, philosophical and scientific knowledge needed to question received wisdom.
Perhaps, foreign states have been funding the TTP all along. But they clearly had no role in constructing the education infrastructure that produces men like Ali or those who run our civil and military bureaucracies. The institutions responsible were set up by the state itself and, in the case of seminaries, by citizens harbouring specific political agendas. Insofar as some of these men have been working against the Pakistani state ‘at the behest of foreign states’, it would seem that our education system has either failed to prevent them from ‘falling prey to propaganda’ or else been complicit in preparing them for future careers in terrorism and vigilantism.
Finally, that Ali confessed by video to the media rather than before a court of law — highlights the grim reality that our education system has not just led us to this crisis, but that it has also constrained our collective ability to imagine a way out. All it has enabled us to thus far do is resort to exceptional measures like broadcasting confessions, leaking reports to media, establishing military courts, and launching military operations.
Nothing short of an overhaul of the education system, based on dialogue among political actors concerned, may help break this impasse.

Pakistan expelled popular Polish presenter, traveller and writer Martyna Wojciechowska on Thursday for violating visa rules, reported Radio Poland.
Martyna Wojciechowska claimed that she was detained by Pakistani military intelligence while filming a TV series in that country.
Poland’s foreign ministry said that Wojciechowska’s crew did not comply with instructions from the Pakistan authorities. It added that Wojciechowska, the former editor-in-chief of National Geographic Poland magazine, on Thursday left Pakistan with her crew on a flight to Poland.
Wojciechowska said in a post on Facebook: “In the north-western part of Pakistan, close to the border with Afghanistan, where we were filming another episode of the ‘Woman at the Edge of World’ program, we were detained by the Inter-Services Intelligence.”
She added: “Our equipment was forcibly confiscated and we were prevented from working. We spent the next days under house arrest under constant police and military supervision.”
She said that after almost 24 hours travelling through the mountains under escort, she arrived in Islamabad with her colleagues.
The Polish foreign ministry said that according to the authorities in Pakistan the “television journalists made recordings in restricted areas without the appropriate visas (they used tourist visas), the required journalistic accreditation and administrative permits for access to restricted areas."
It added: "The team did not comply with the instructions of the local authorities.”