Video Report - Why are so many countries involved In Libya’s war?

Video Report - Bernie Sanders asks, 'Why should we believe anything that Trump says has credibility?' 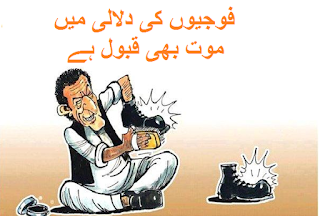 Arrest of Pashtun leader and need for new social contract

United in Struggle: Social Revolution of the Pashtun Borderlands


There is a struggle that stretches from Afghanistan’s capital Kabul to the southern Pakistani city of Quetta. It is the struggle of the Pashtuns, the largest tribe of Afghanistan and Pakistan’s borderlands.

The area they live in is known as one of the world’s most unstable places, strategically important for the U.S.-led War on Terror. Since 2001, drones, military operations from Pakistani and Afghan government forces, CIA-led night raids, and forced disappearances have been part of Pashtuns’ daily life.
But in contrast to the perception of Pashtun elitism, especially in Afghanistan, the rural tribes of the Afghanistan-Pakistan border region have been marginalized by their states, left to their destiny as collateral damage of the international War on Terror.

In 2018, Manzoor Pashteen, a 25-year-old Pakistani activist and founder of the Pashtun Tahafuz Movement (PTM), succeeded for the first time in getting global attention to this condition.
While Pashteen advocates for the protection of Pashtun’s human rights on the Pakistani side of the Durand Line – the disputed 1640-mile border between Afghanistan and Pakistan – his revolutionary words echo across the border, inspiring Pashtuns in both countries to speak out.
The red and black “Pashteen hat,” originally from Northern Afghanistan and worn by Pashteen at public rallies and protests, now covers the heads of youth across Kabul, Jalalabad, Kandahar, and many other Afghan cities. Videos of his speeches are saved in cell phones across the country.
The PTM leader moves elegantly, with gestures from the Islamic social etiquette. He dresses with the simplicity of a Pashtun man but speaks with the verve of a national hero. Pashteen’s public image has become powerful because he provides an alternative image of traditional Pashtun men and society; a representation Pashtuns believe finally does justice to the truth.

For long, Pashtun culture has been misrepresented by the media as radical, violent, and dominated by obtuse and ferocious men. The stories of the region’s women are rarely told, if not for tales of extreme deprivation. Pashtun women are usually portraited as unidentified walking burqas, also partially due to their refusal to be pictured.
But this doesn’t mean that what cannot be seen does not exist. Beyond the PTM’s outspoken Pashtun women, such as Wranga Lunri and Sanna Ejaz, there is a court of females struggling for their rights. Rather than being passive victims, these Pashtun women are an integral part of the ongoing waves of actions, the life and the soul of the Pashtun society.

Wranga Lunri, sister of the killed PTM activist, Arman Lunri, calls upon the Pashtuns to remain nonviolent & follow the instructions of PTM’s leadership. She says all those struggling for rights, are Arman Lunri to her. She is offering solace to the aggrieved activists. Bravo https://twitter.com/NasirYousafzai0/status/1091782419680763904 …

Women participating in large crowds and at times even leading protests is indeed unusual for traditional Pashtuns. It breaks the social taboos of females appearing in public. The bravery of those who decide to come out has been received with both fascination and criticism.This is, however, also a sign of the diversity of the PTM. Islamists and secular nationalists have put differences aside and stand together against the injustice and pain they share. This newly awakening recalls the ancient unity of Pashtunwali, the Pashtun people’s traditional set of values and behavioral guidance.The Pashtun way of life, as the code is also known, is shaped throughout the history of an extreme egalitarian society, and melted easily with the form of Islam that characterized the region.Indeed, the Islamization policy that Pakistan’s military dictator Muhammad Zia-ul-Haq enforced in the late 1970s significantly changed the social structure of the Pashtun lands. Zia-ul-Haq tried to implement an Islamic unity against the ethnic bond that unites Pashtuns. While he succeeded in transforming the local approach toward religion, the ties of the Pashtun tribes across the Durand Line remained strong.
Social Resistance Across Borders
Rather than a divide, the porous Afghan-Pakistani border is a space of interactions and exchanges. These territories are characterized by extreme mobility, with ties of love, economic support, and indeed a shared struggle against oppression. However, the motive driving Pashtun’s social resistance on the two sides of the border is different.
In Afghanistan, the struggle against injustice mainly comes from operations conducted by the U.S.-led coalition. Communities bound by centuries of tribal code lost trust among each other, and villages became coves of spies. People sold neighbors for revenge, and thousands of Pashtun men disappeared, were murdered, tortured, or send to secret prisons without trials.
The situation is different in Pakistan. The history of anti-colonialism enforced a strong and structured political consciousness that guided a struggle against both insurgency radicalism and state-imposed violence.


Pakistani material and financial support to Afghanistan’s Soviet resistance, and later the sheltering of the Taliban, forced the perception of local insurgencies as the right hand of the Pakistan establishment. Pakistan’s double agenda of both harboring terrorists and being an ally to Americans in the War on Terror exhausted particularly the Pashtuns of the tribal belt, the main social and economic victims of this unsuccessful strategy.
Now Pakistan’s government fears the current PMT-induced wave of protests among Pashtuns and sees it as a movement of independence that could trigger other minorities to speak out and threaten the nation-state.
The liberal and social circles of Kabul, on the other hand, support the movement in Pakistan with the hope to tactically revive the idea of Pashtunistan, the unification of the Pashtun homeland unjustly divided between Afghanistan and Pakistan by the British Indian government in 1893. Their feelings, however, are far from what has since 2011 moved gatherings within Pashtuns directed affected by the war.

While Pashtuns in Afghanistan and Pakistan are driven by different forces, they are united in their struggle.
In Pakistan, the PTM refuses to react violently despite their leaders being arrested, brutally oppressed, and their demands publicly manipulated. The movement is aware of the power of Pakistan’s military state, and they boldly avoid entering their own martial realm by stressing their struggle is non-violent.
In contrast, the lack of a political structure in Afghanistan keeps the movement there on the edge of spontaneous violence guided by exhaustion rather than tactical aims.
In both cases, it seems that the ultimate aim is not to gain power within the state but to revitalize an idea of a geographical and political space that goes beyond the Westphalian concept of nation-states, and instead recalls the ancient nomadic tradition of the Pashtun lands.
It is in this that Pashtuns find their revolutionary power on both sides of the Durand Line. This social revolution is unique because it is fluid, crossing national borders, and moving a relentless flow of awakened consciences. It aims for the long haul, nothing else.
https://theglobepost.com/2020/01/23/pashtuns-afghanistan-pakistan/
No comments: Links to this post