All conspiracies against PPP hatched in Rawalpindi, Bilawal Bhutto

Pakistan Peoples Party Chairman Bilawal Bhutto Zardari has said the PTI government is not elected but selected. It has destroyed economy, leaving all segments of the society including traders in the state of anxiety. Addressing lawyers at the Multan High Court Bar Association on Wednesday, he said the selected government has no worry about reducing people’s miseries. The rulers do not have people’s mandate. He told the lawyers community that the country needs their role to save constitution, democracy and federation. The PPP and lawyers can jointly save the country through collective struggle. He said the PPP and lawyers have remained part and parcel in struggle against dictators for the supremacy of rule of law and parliament. He said lawyers played a key role for the protection of people’s rights. The country is passing through 2019 and political workers are thinking about justice and empowerment of judiciary. The story of justice cannot be detached from the history of the Bhutto family. The PPP believes in respect to honorable judges. The brave judges always rejected compromise on principles despite facing life threats. He said all conspiracies against the PPP took place in Rawalpindi. The PPP has always been victimized, targeted and hanged in Rawalpindi. He said how he could respond to workers when Rawalpindi has become centre of victimization and conspiracies against the PPP? The judiciary hanged PPP founder Zulfikar Ali Bhutto in Rawalpindi. PPP Co-chairman Asif Ali Zardari had sent a reference to the Supreme Court of Pakistan ten years ago for the retrial of Bhutto’s judicial murder. The whole Bhutto family has been waiting since long when the case is fixed for hearing. Bhutto’s judicial murder was a serious blunder and the judiciary must accept that Bhutto was innocent. The Bhutto family has been deprived of justice even after 70 years. He said Zulfikar Ali Bhutto had given a complete code of life to the country in term of the 1973 Constitution but he was hanged. Even the judiciary could not give justice to Benazir Bhutto after her assassination in a suicide blast again in Rawalpindi, he added. Benazir launched countrywide agitation for the independence of judiciary and sacrificed her life for people’s rights. He said the National Accountability Bureau is targeting democratic leadership instead conducting unbiased accountability in Naya Pakistan. NAB laws introduced by a dictator are ridiculing justice. The media is facing censorship. Political victimization should not have a role in Naya Pakistan, he said. The PPP chairman said Asif Ali Zardari is in jail without any charge and conviction. He said new laws are enacted to sentence the PPP leadership. He said all cases against Zardari belong to Sindh or Karachi but he is facing trial in Rawalpindi. He said Zardari has faced imprisonment for eleven years without any charge and now he is again in jail without any conviction. He said conspiracies are being hatched to bring honorable judges under pressure for desired verdicts like in the Musharraf rule when he sacked Supreme Court of Pakistan judges. He said the country could only be saved through struggle against undemocratic forces. He said lawyers should launch struggle for the independence of judiciary. https://www.thenews.com.pk/print/551848-all-conspiracies-against-ppp-hatched-in-rawalpindi-claims-bilawal
No comments:

Hannah Ellis-Petersen A source claims government plans secret vaccinations after 12 children fall prey to disease. Officials in Pakistan have been accused of covering up an outbreak of the most dangerous strain of polio and planning a covert vaccination programme to contain the disease.According to a source in Pakistan’s polio eradication programme and documentation seen by the Guardian, a dozen children have been infected with the P2 strain of polio, which causes paralysis and primarily effects those under five. Dr Malik Safi, coordinator of the national emergency operation centre of the Pakistan polio eradication programme, confirmed the P2 outbreak, but would not give any further comment. The P2 strain had previously been eliminated from the country. However, the new cases were allegedly kept hidden from the government and from international donors, including the UK’s Department for International Development, under direct instruction from Babar Bin Atta, the prime minister’s focal representative on polio eradication, who was last month forced to resign after he was accused of corruption. DfID has donated millions to Pakistan’s polio eradication programme. The alleged cases, which have all resulted in paralysis, have been discovered mainly in Diamer district, with one in the capital, Islamabad. Under Pakistani law, every new case of polio in the country has to be officially registered with the government, which then alerts international health bodies. “But to hide their negligence and their poor performance, Babar Bin Atta decided not disclose the cases to anyone,” said the source. The re-emergence of P2 would not only be a dramatic step back in Pakistan’s fight against the polio, it would also be symptomatic of what those in the programme have described as “terrible mismanagement” under Bin Atta.Alongside Afghanistan, Pakistan is one of only two countries in the world that has not entirely eradicated polio. It was a key milestone in 2014, when Pakistan officially declared it had entirely eradicated P2 polio.Polio exists in three different strands, P1, P2, and P3, with P2 notorious as the most contagious and most vicious in its impact on those infected.According to the source within the programme, the renewed outbreak of the P2 strand came from a mismanagement of vaccines, which carry a live strain of the disease to create immunity. After the strand was eliminated from Pakistan five years ago, all P2 vaccines should have been collected from hospitals and clinics and not used. However, it appears a P2 vaccine was administered accidentally and a child became a carrier for the disease. Tests on the new cases allegedly show the children are all carrying a form of the disease that originates in vaccine form. “Somewhere, somebody has inaccurately used this vaccine and because of this negligence … this virus was brought back into the environment and our children are again getting infected with P2,” alleged the source. However, it is understood that, instead of publicly declaring the renewed outbreak and beginning a public vaccination campaign, a “secret” vaccination campaign will begin on Monday in Rawalpindi and surrounding cities in an attempt at containment. It is understood that only senior members of the polio programme are aware of the P2 campaign, with others – even those who will be administering the vaccines – led to believe it is a standard P1 and P3 polio vaccination programme. “This P2 outbreak can only be contained if they do a quality vaccination campaign, and how can you do a quality campaign if you are carrying it out in secret, without any awareness or accountability?” said the source. “If anything goes wrong and this P2 polio spreads throughout the whole country, who will take responsibility? Will they just keep telling more lies to cover up their mistakes and put more children at risk?”Since 2018, there has been an “alarming” rise in polio cases in Pakistan, according to experts, with 77 official cases this year. Senator Ayesha Raza Farooq, who served as the prime minister’s focal person on polio eradication from November 2013 to August 2018, said Bin Atta had “ruined” the programme through corruption and mismanagement. Farooq accused the prime minister, Imran Khan, of refusing to listen to complaints against Bin Atta for the past 10 months. “PM Khan did not take heed to the programme and ignored the complaints which were coming to him against Babar Bin Atta,” she said. “They covered up the refusals and they allegedly used fake markers on kids’ to show they were vaccinated who actually were not. The damage that has been done to the programme has literally reversed many of our achievements.” https://www.theguardian.com/global-development/2019/nov/07/pakistan-accused-of-cover-up-over-fresh-polio-outbreak
No comments:

Mosquito-borne infections soar to record-high number in the country this year with 66 deaths so far. 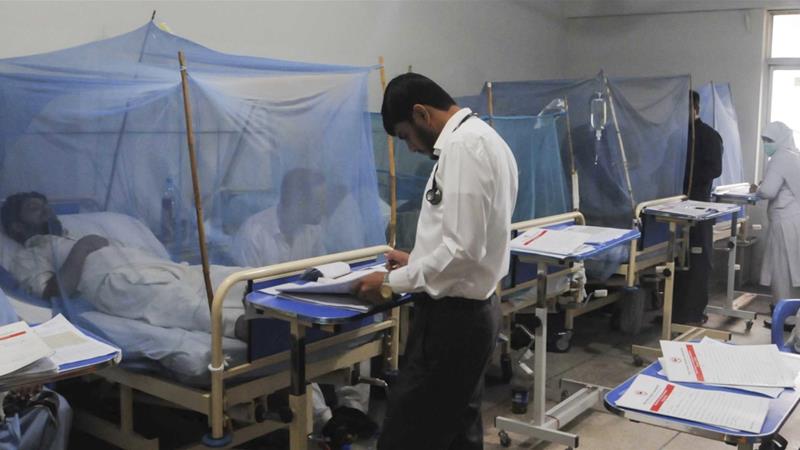 A record-breaking 44,000 people have been infected with mosquito-borne dengue in Pakistan this year, a senior health official said, as increased outbreaks linked to rising temperatures and erratic rainfall ravage other parts of Asia.
Rana Safdar, a senior official at the National Institute of Health (NIH), told AFP news agency on Wednesday the figure is a huge leap from the previous record of 27,000 infections in 2011.
Safdar said 66 people were killed by the disease so far in 2019, compared with 370 in 2011.

He blamed climate change for the surge, but would not elaborate. The government was "employing all available resources at its disposal to contain the problem", he said.
The highest number of patients was recorded in the capital, Islamabad, and the neighbouring city of Rawalpindi, where 12,433 people were found infected with the virus, with 22 deaths.
The southern province of Sindh had 10,142 cases and 26 deaths, according to NIH data shared with local media outlet the Dawn. There were 9,260 cases in Punjab, the most populous province.
Dr Mahseema Siddique, who treats dengue patients, blamed the government for the rise in cases, saying local authorities in Punjab and Islamabad, in particular, failed to take precautions such as covering up water reservoirs or spraying anti-dengue chemicals.
"They woke up only after hundreds of people got infected and that was too late. There are a large number of areas where spray teams could not make it," he said.

Dengue is transmitted mainly by the Aedes Aegypti mosquito, which thrives in densely populated tropical climates and breeds in stagnant pools of water.
Mosquitoes pick up the virus from infected humans - even asymptomatic ones - and pass it along to other people through bites.
Infections have steadily climbed across the globe since the 1970s because of rising temperatures and irregular monsoon rains linked to climate change, which allow for ideal mosquito breeding conditions.
This year outbreaks have rampaged through Southeast Asia in particular, infecting hundreds of thousands, killing hundreds, and crippling healthcare systems as governments struggle to contain the untreatable virus.
Dengue is mostly found in crowded areas, and breakneck urbanisation across the globe has helped the virus thrive.
Dubbed "breakbone fever", it inflicts suffering, with intense flu-like symptoms: severe headache, pain behind the eyes, full-body aches, high fever, nausea, vomiting, swollen glands and rashes.