Bangladesh blogger's murder: Fighting for free expression in an age of death squads

A Bangladeshi blogger, Niloy Chatterjee, who used the pen name Niloy Neel and was a critic of religious extremism, was killed by suspected Islamic militants on August 7. This is the fourth time that a blogger has been hacked to death with a machete in Bangladesh this year. Chatterjee was an atheist of Hindu background. Those that have been killed in the past have had varying religious identities and backgrounds. All of the four men that have been killed this year were on a list of 84 “atheist bloggers” that was submitted to the government and circulated publicly. Not all of these bloggers were atheists but they had been part of a campaign to promote secularism in Bangladesh. The only thing that all these attacks have in common is that they were all directed against bloggers who have raised their voice against the rising trend of Islamic extremism in the world and have demanded that the perpetrators of atrocities in Bangladesh’s 1971 war should be brought to justice. Bloggers in Bangladesh, Chatterjee among them, had been demanding the prosecution of Islamic leaders accused of being involved in war crimes during the 1971 war of independence. The Prime Minister of Bangladesh, Sheikh Hasina Wajed, set up a tribunal to conduct trials for war crimes in 1971 and several leaders of an Islamist party that had carried out massacres have so far been convicted, of whom a few have been hanged. The recent rise in violence from Islamic extremists could be a backlash against this drive. The Bangladeshi government, under Sheikh Hasina, is expected to do everything in its power to bring to justice those who perpetrated these attacks. The government should also provide security to bloggers, journalists and all others vulnerable to such attacks.
Imran Sarker, the leader of a network of activists and bloggers has condemned the attack, saying, “We are speechless. He was demanding justice for killing of other bloggers. Who will be next for demanding justice for Niloy?” As Sarker has suggested, these attacks are attempts to silence all secular voices in Bangladesh. Perhaps one of the reasons for the recent escalation of religiously motivated violence in Bangladesh is the increasing prevalence of radical Islamic terrorist groups and ideologies. It is quite admirable that these bloggers continue to provide an alternative narrative to the growing fundamentalist propaganda by groups such as Islamic State, knowing that they are risking their lives in doing so. Such individuals, anywhere in the world, should be celebrated and protected and the world must realise the importance of promoting and defending a secular counter-narrative to fundamentalism.
No comments: Links to this post

Attackers armed with machetes have killed another blogger in Bangladesh, the fourth killing of an online critic of religious extremism in the Muslim-majority country in less than six months.
Niloy Chakrabarti, 40, a blogger who advocated secularism and published under the name Niloy Neel, was killed in his flat in the capital, Dhaka, police official Mustafizur Rahman said.
Police confirmed the 30-year-old had been murdered by a group of four people who had pretended they were looking for somewhere to rent.
"They entered his room in the fifth floor and shoved his wife aside and then hacked him to death. He was a listed target of the Islamist militants," Imran Sarker, head of a network of activists and bloggers, said.
"We are speechless. He was demanding justice for killing of other bloggers.
"Who will be next for demanding justice for Niloy?"
Deputy police commissioner Muntashirul Islam said Mr Chakrabarti's wife, Asha Moni, had been "confined to another room" during the attack.
Ms Moni told reporters that during the incident one of the attackers was shouting "Allahu Akbar [God is great]".
She said she pleaded with the assailants not to kill her husband but they dragged her to a veranda and confined her there, according to online newspaper bdnews24.com.

The Bangladesh branch of Al Qaeda in the Indian Subcontinent (AQIS), Ansar al-Islam, claimed the killing and warned of more to come, according to monitoring group SITE.
"If your freedom of speech maintains no limits, then widen your chests for freedom of our machetes," the group, which also claimed to have murdered secular blogger Washiqur Rahman in March, said in posts on Twitter and Facebook.
Mr Chakrabarti was a critic of religious extremism that led to bombings in mosques and the killing of numerous civilians, Mr Sarker said.
He was also one of hundreds of bloggers driving a movement demanding the death penalty for Islamist leaders accused of atrocities in Bangladesh's 1971 war of independence.
Police said Mr Chakrabarti had been one of the organisers of large-scale protests in 2013 against Islamists convicted of war crimes during the conflict.

Militants have targeted secularist writers in Bangladesh in recent years while the government has tried to crack down on hardline Islamist groups seeking to make the South Asian nation of 160 million a sharia-based state.
In February, machete-wielding assailants hacked to death US citizen of Bangladeshi origin and critic of religious militancy Avijit Roy and seriously injured his wife and fellow blogger Rafida Bonya Ahmed.
They were attacked in Dhaka after leaving a book fair.
On March 30, Washiqur Rahman, another secular blogger who aired his outrage over Roy's death on social media, was killed in similar fashion.
Another secular blogger, Ananta Bijoy Das, was attacked by machete-wielding attackers and killed in the north-eastern district of Sylhet on May 12.
In a Facebook post on May 15, Mr Chakrabarti said he had been followed by two young men after protesting Das's murder, but police refused to register the complaint and instead told him to leave the country.
Most secular bloggers have gone into hiding, often using pseudonyms in their posts. At least seven have fled abroad, according to Canada-based atheist blogger Farid Ahmed, who helped several of them.
Activist groups say they fear Islamist hit squads have lists with the bloggers' real names and addresses.
Asif Mohiuddin, another blogger who himself survived an attack in 2013, described Mr Chakrabarti as an atheist "free thinker" whose posts appeared on several sites.
"He was critical against religions and wrote against Islamist, Hindu, Christian and Buddhist fundamentalism," Mr Mohiuddin said.
No comments: Links to this post

Chairman Pakistan Peoples Party Bilawal Bhutto Zardari denounced the reported child abuse scandal in Kasur district of Punjab, the country’s biggest ever child abuse scandal which discovered 400 video recordings of more than 280 children being forced to commit indecent acts where most of the victims were under 14. Bilawal Bhutto Zardari said that this type of scandal is a slap on the provincial government of Punjab, which keeps harping on other smaller issues but kept the nation in darkness over this worst human rights tragedy. Bilawal Bhutto Zardari also condemned the police torture of parents of the victim children, who demonstrated against the failure of local police to prosecute the criminals who orchestrated the scandal. Chairman Pakistan Peoples Party urged for an impartial enquiry into this scandal and for the culprits to be taken to task. 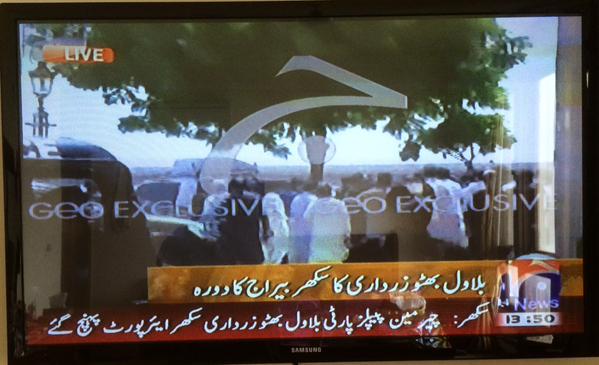 Pakistan People's Party (PPP) Chairman Bilawal Bhutto Zardari arrived in district Sukkur of Sindh to review flood relief efforts on Sunday, Samaa reported.
According to Samaa correspondent, the PPP Chairman is accompanied by the opposition leader in National Assembly Syed Khursheed Shah, Chief Minister Sindh Syed Qaim Ali Shah and other ministers.
Bilawal will be briefed about the situation of flood by Irrigation Department officials during his visit to Sukkur where he will review relief and rescue efforts by government authorities.