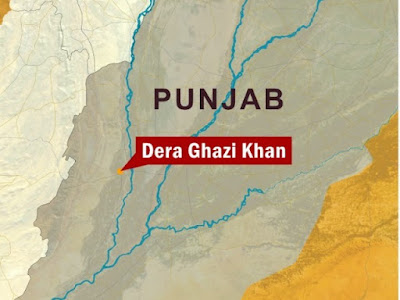 Three terrorists belonging to a banned organization have been killed in an encounter with police in Dera Ghazi Khan, Radio Pakistan has reported.Two of the three men killed in the encounter were reportedly involved in an attempted terrorist attack on an Ahmadiyya mosque about a month ago, according to the local police.A police spokesman confirmed that two dead terrorist, Haneef and Iftikhar, were involved in the July 11, 2015 attack on the Ahmadiyya mosque situated on College Road in Taunsa Sharif where a policeman guarding the mosque was critically injured.A special team was constituted to arrest the militants following the attacks and the attackers were soon arrested. A cache of weapons and suicide jackets were recovered from the militants.The spokesman said police van carrying alleged terrorists came under attack on Indus Highway resulting in a shootout with the terrorists and their accomplices.Three of the terrorists were killed in the exchange of fire.A policeman was also injured in the encounter, Radio Pakistan reports..

The Sindh government with the help of intelligence agencies has identified at least 48 seminaries ( madrassas ) in the province having links with banned terrorists organisations and half of them are operating in Karachi.
“These seminaries are promoting terrorism and terrorism training . We have worked out and our security forces are ready to take action against these illegal and un-registered madaris,” IG Sindh Police Ghulam Hyder Jamali told a meeting held on Wednesday at CM House.
The meeting, chaired by Chief Minister Qaim Ali Shah, was held in compliance with the decision of the apex committee which decided to coordinate with the ulema of all schools of thought to get all madrassas registered under the amended laws in the province.
The sources said that all of these seminaries (Madaris) have belongs from Deoband school of thoughts in involved in terrorism, promoting of hatred materials and terrorists training to the banned terrorists groups.
The IG Sindh said that as many as 9,590 seminaries have been reported in the province, of which 6,503 are registered, 3,087 are un-registered and 167 have been sealed because of illegality.
During the meeting, the chief minister assigned the task for co-ordination to his special assistant on religious affairs Dr Qayoom Soomro and asked him to call an urgent joint meeting of all stakeholders, including ulema specially associated with Wafaqul Madaris, and seek their support for registration of the seminaries under the amended laws of the Sindh government.
“Provincial authorities have sought the guidelines from the federal government for registration of madrassas and even recommended some amendments, but we are still waiting for the response,” Qaim Ali Shah said.
The provincial government cannot further wait and waste time and would itself amend the law for the safe and secure registration of madaris, he added.
The chief minister has given the go-ahead to the officials concerned to expedite their work and ensure that the task is completed as soon as possible with the co-operation of all the stakeholders in the province.
Dr Soomro told the meeting that he has already started establishing contact with the religious scholars and discussed with them on the subject. “No one among them is opposing the idea for registration of seminaries and all are willing to co-operate with the government.”
Home Secretary Mukhtar Soomro said that the Sindh government would amend the law to get NOC from the concerned DC, home secretary and SBCA as compulsory for safe and secure registration of any madrassa.
http://www.shiitenews.org/index.php/pakistan/item/17623-50-madrassas-in-sindh-linked-with-banned-outfits-sindh-govt
No comments: Links to this post

Over a million people affected by floods in Pakistan: NDMA

Over a million people have been affected by floods across Pakistan so far, the National Disaster Management Authority (NDMA) said on Thursday.
Since the flash floods started ravaging various parts of the country in mid-July, at least 166 people have been killed and 128 injured. Besides, 8,471 houses and 2,976 villages have also been damaged by the floods.
Currently, Taunsa and Guddu barrages are facing a high-level flood, whereas, Kalabagh, Tarbela, Chahsma, Kotri and Nowshera are experiencing medium-level flooding.
Tarbela dam has already reached its capacity of 1,550 feet. On the other hand, Mangala is just short of its capacity – 1,242 feet – by six feet.
According to details provided by the NDMA, 13 people were killed in Balochistan, 79 in Khyber Pakhtunkhwa, 42 in Punjab, 23 in Azad Jammu and Kashmir, seven in Gilgit-Baltistan, and two in FATA.
Read: Met office predicts more rains, floods across Pakistan
Responding to the disastrous situation, NDMA provided around 70,000 tents to the victims across the country. Also, rations packs, 1,500 tarpaulins, 8,913 blankets, 700,000 aqua tablets and 124 tons of mineral water have also been distributed to the affectees, Radio Pakistanreported.
In Punjab and Sindh, 154,140 and 583,096 people were evacuated respectively from flood-hit areas. According to the authority, 757 relief camps were established across the country to facilitate and provide safe haven to the flood-affected population.
Balochistan
Providing details of the damage wrought by floods, in Balochistan at least 13 people have been killed while 33 have been injured. As many as 798 houses have been damaged by the floods. However, the NDMA has not released the number of people affected by the floods in the province, but 383 tents and 8.4 tonnes of ration have been distributed among flood affectees.
Khyber-Pakhtunkhwa
At least 79 people have been killed, while the flash floods left 70 people injured. Around 3,320 houses have been damaged along with a number of villages affected. So far, 3,614 tents and 385.53 tonnes of ration have been distributed distributed with eight relief camps established.
Punjab
In Punjab, 42 people have been killed and 12 injured. Around 3,058 houses were damaged in 496 villages with 367,929 people affected. Some 154,140 people have been evacuated to safer areas with 394 relief camps hosting 17,404 people. The government has provided 37,800 tents and 3,138 tonnes of ration to flood affected people.
Sindh
Although there have been no reports of deaths from floods in Sindh so far, around 583,096 people in 2,177 villages have been affected by the floods there. Some of the affected people have been shifted into 349 relief camps. The pdma has also distributed 24,159 tents and 642.39 tonnes of ration have been distributed.
Meanwhile, the Chief of Naval Staff Admiral Muhammad Zakaullah, while attending a Command and Staff Conference in Islamabad, directed concerned officials to to continue monitoring the flood situation, and make utmost efforts for rescue efforts by judiciously utilising the deployed assets and resources  to provide much needed assistance to flood victims.
Azad Jammu and Kashmir
At least 23 people were killed and five injured because of floods in AJK, whereas, 321 houses were damaged, and 17 villages were left affected. Around 3,000 tents were given here to establish camps.
Gilgit Baltistan
In Gilgit-Baltistan, at least seven people were killed and six injured. As many as 812 houses were damaged in 286 villages affecting 136,000 people. Around 3,380 tents and 21.5 tonnes of ration were distributed in the region.
FATA
At least two people were killed and two injured by the floods that also left 162 houses damaged in the region.
No comments: Links to this post

WITH national attention mostly preoccupied by security matters and political theatre, the plight of Fata’s internally displaced persons is easily forgotten.
Yet the fact remains that hundreds of thousands of people displaced by the conflict in the tribal areas remain unable to return home, while there are indications that their ordeal may get tougher still.
As reported in this paper on Wednesday, UN agencies are likely to wind down relief activities for IDPs mainly due to a funding shortfall, along with restrictions on access to displaced persons placed on humanitarian workers — both local and foreign.
Attracting funds from the global community in these times of financial uncertainty is indeed tough, along with the fact that more ‘high-profile’ conflicts, such as Syria, are currently attracting the attention of the donor community.
In the Fata IDPs’ case, while $433m is required to fund relief programmes, the UN says only $197m has been received. The fact that the state has restricted access — reportedly due to security concerns — to aid workers has also hampered efforts, as organisations are not able to independently verify the conditions.
In the meantime, only 4,000 out of over 100,000 displaced families, whose details have been verified, have been able to return to North Waziristan.
The government hopes to send all IDPs home by the end of 2016. That is a long way away and the state must explain how it expects to sustain these people until then, especially if funds are short.
If donors have tightened their purse strings, then the state must do some creative maths and come up with the funds for the IDPs’ upkeep and rehabilitation as these are Pakistani citizens and it is primarily the government’s responsibility to care for them.
Secondly, the government must reconsider its policy of not giving access to IDPs to humanitarian workers. If it is unable to help IDPs, it must not create obstacles in the way of those who are in a position to provide help.
The displaced persons’ food, shelter, health and education needs must be catered to until they are able to return to their native areas, while the conflict zones must be rebuilt to allow these people to start their lives anew.
The military may have done its job in largely clearing the tribal areas of militants. Now it is the state’s job to ensure that the civilians displaced by the military operation are not left in the lurch.
No comments: Links to this post A US drone attack on a militant compound in North Waziristan on Thursday killed at least five militants, security officials said.
Military sources said the drone strike took place in Lawra Mandi village of Datta Khel in the North Waziristan tribal district bordering Afghanistan, where the military is battling Taliban militants.
The drone fired two missiles targeting a house, killing at least five suspected militants, sources said.
“At least five militants were killed in the drone attack,” senior security official told AFP.
Another security official in Peshawar confirmed the attack and the casualties.
The area is generally off-limits to journalists, making it difficult to independently verify the number and identity of the dead.
North Waziristan is among Pakistan’s seven tribal districts near the Afghan border which are rife with insurgents and have been strongholds of Taliban and Al Qaeda operatives, among others.
Military in June last year launched an all-out operation named 'Zarb-i-Azb' against Taliban militants in the region, following which parts of the tribal agency was declared cleared of militants.
The army has intensified its offensive since the Taliban's massacre of 153 people, mostly children, in a school in the northwestern city of Peshawar in December.
http://www.dawn.com/news/1198786/us-drone-strike-kills-five-militants-in-north-waziristan
No comments: Links to this post