This week, Pakistan military spokesperson Asif Ghafoor laid out his army’s doctrine of illegal disappearances: All is fair in love and war — on its own people.

Pakistan Prime Minister Imran Khan had just returned home after a four-day visit to “all-weather friend” China on 29 April, when the country’s military spokesman, Major General Asif Ghafoor, struck a cruel blow.
“All is fair in love and war,” Ghafoor said, when asked how the Pakistan Army would deal with missing citizens in Balochistan, Khyber-Pakhtunkhwa and other parts of Pakistan — disappearances the army itself is allegedly responsible for.
The comment came in a question-answer session at the end of a press conference that lasted one hour and 22 minutes, where Ghafoor laid out a magnificent outline of the problems that ailed Pakistan and how the state planned to correct it.
All through, there was no mention of Khan by name, although Ghafoor, a three-star general, indeed dropped “wazir-e-azam”, the prime minister’s title, once or twice.
If there was any doubt as to who runs Pakistan, there was no need to look any further.
Several Pakistanis had the same thought.
According to veteran journalist Zahid Hussain, also an occasional writer for ThePrint: “Should DG ISPR pontificate on politics and other issues that does come under his domain? Then he should not object when the military is criticized [sic].”
Activist-researcher Usama Khilji said: “It is alarming that DG ISPR is talking like he heads a political party in Pakistan by taking digs at political leaders, clearly overstepping his role as military spokesperson. Army should let politics be in the Parliament & focus on its constitutional duty of security.”
And an unkind cut on social media, which Ghafoor had praised, along with journalists, for their service to the Pakistan nation in its hour of troubles on 26 February, when Indian Air Force (IAF) pilots had struck terror camps in Balakot deep inside Pakistani territory:

A close examination of Ghafoor’s press conference is revelatory.
As the chief spokesperson of the Pakistan armed forces, he spoke bluntly about how foreign intelligence agencies — India’s Research & Analysis Wing (R&AW) and Afghanistan’s National Directorate of Security (NDS) — had funded disaffected Pakistanis, especially the Pashtun Tahafuz Movement (PTM), which has been openly critical of how the Pakistan Army has brutalised Pashtuns.
R&AW gave PTM the funds to carry out a massive dharna in Islamabad last year, and PTM leaders went to Indian consulates in Afghanistan, while the NDS funded it to grow its movement, Ghafoor said, adding, “We have the details.”
There was significant information on the Indian air attack on Pakistan on 26 February, Pakistan’s retaliation the day after (“we downed two aircraft and one pilot”), and the exchange of fire along the LoC on the following day, 28 February.
He explained his own course-correction on how just “one pilot” had been caught (Wing Commander Abhinandan Varthaman), “not two”, as he had stated earlier — it was the fog of war, Ghafoor said. He strenuously asserted that no Pakistani plane had been downed or pilot captured, to refute India’s claims that it shot down one of the F-16s that crossed the border on 27 February.
“Jhoot bolne ki koshish karte rahe, lekin jhoot ka koi sabut nahin (They try to lie, but have no proof),” Ghafoor said, giving the Pakistan military’s account of what happened during those 48 hours in February.

Then Ghafoor stepped beyond the pale. For the next hour or so, he outlined the Pakistan Army’s view of how the state should be run.
It was a majestic sweep, incorporating in quality detail the mainstreaming of Islamic madrassa education, how it was a national embarrassment that 25 per cent of Pakistani children didn’t go to school, why today’s GDP was so low, and how the Pakistani state, once upon a time, had been a much better country.
“In 1947, there were 247 madrassas. In 1980, that grew to 2,861 madrassas. Today we have over 30,000,” Ghafoor said. He pointed out that the blowback from the Afghan war, 1979-1989, was a major factor responsible for their exponential growth.
“Less than 100 madrassas are involved in violent extremism… They impart eight years of religious education, even students from the US come here to study,” he said.
“Can you guess under which ministry these madrassas functioned?” Asif Ghafoor asked.
“Under the ministry of industries!” he replied, allowing himself a small smile.
“Today we have decided to put them under the ministry of education,” he went on, adding, “The army chief had a lot of conversations with ulema all over the country, all of whom said madrassas have to be mainstreamed.
“He also spoke to the PM. The work is happening in three phases, a Bill is being prepared. It will need 2 billion rupees to start work, and then one billion rupees every year, thereafter. We will do it,” Ghafoor added.
It is shameful, he said, that Pakistan is number 113 out of 129 in the Human Development Index.

For the youth of Pakistan

By now, the three-star general-cum-spokesman was in full flow: Today’s young Pakistanis, when they look around, must wonder what is this country, full of army operations and bomb blasts.
“I would like to tell them that in the decade of 60s-70s, Pakistani was a wonderful country. Everything was looking good,” he said. “GDP growth was above 11 per cent. The rupee was 4-5 against the US dollar. Agriculture share in GDP was 46.22 per cent. The social indicators were great. There was religious and sectarian harmony. Moderation ka daur tha (it was the era of moderation),” he added.
There were the statements on Kashmir. You could be forgiven for thinking that the Prime Minister of Pakistan or a duly-elected leader was speaking.
“After Independence, Pakistan had to deal with “Kashmir ka masla (the problem of Kashmir)”, Ghafoor went on, “since every Pakistani believes that he will do anything to make Kashmir independent.” He cited the wars fought with India, in 1948, 1965, 1971 and 1999.
“Kashmir hamaari ragon main daurta hai,” Ghafoor said. The story of Kashmir runs like blood in our veins.
A comparison with Indian Muslims, 20 crore of them, who had to deal with the forces of Hindutva, followed: “200 million Muslims ki zindagi kharab hui (The lives of 200 million Muslims was affected adversely)… Pakistan was formed on the basis of ideology, of Islam, dil main dard genuinely hota hai (the heart aches… when you think) what is happening to Muslims there.”
Intermittently, Ghafoor would remember why he was really here.
“India has an option: Does it want to repeat 27 February (the day Pakistan fighters breached the border) or does it want to come to the table and talk about peace and Kashmir?” he said.
There was advice to the Pakistan Foreign Office: “Hamaara Foreign Office, masha Allah, bahutactive role aur behtar role ada kar raha (Our Foreign Office is playing an active role. If you remain engaged with foreign countries, they will understand you better).”
For example, he said, Pakistan had shared information with 70 countries on al-Qaeda, pointed out that 81,000 Pakistanis had been killed in the war against terror, and suffered property damage worth $300 billion.
Then, as some Pakistani journalists sitting in the front row squirmed, Ghafoor thanked the media for supporting the armed forces in its hour of need in February.
“Remember, this is not 1971. It is not that army, nor that situation and not the media,” he said. “Let me compliment the media. If, in 1971, we had had this media, it would have properly reported on the situation, on the brutality that took place.
“If we had had today’s media in 1971, the Islamic republic of Pakistan would not have been divided,” Ghafoor added.
And when Hamid Mir, a journalist with Geo News, asked Ghafoor about disappeared persons in Balochistan and other parts of the country, which the army is allegedly responsible for, the Major General responded: “All is fair in love and war.”
No comments: 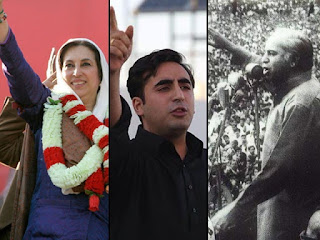 Pakistan People’s Party (PPP) Chairman Bilawal Bhutto Zardari on Tuesday said that the labourers’ rights remain the cornerstone of his party’s democratic ideology, and that the Constitution of 1973 guarantees justified wages, personal security and equal rights.

In his message on the eve of Labour Day being commemorated today across the world, he pledged that the PPP would continue to fight for the labourers’ rights until the labour class “gets what the constitution has guaranteed” for them.

Bilawal said the working class of Pakistan was still being deprived of their due rights, while those denying them their just rights and privileges were also at work. “Hence, the incumbent government of Imran [Khan] Niazi and the collective interests of the working and labour classes of Pakistan stand poles apart from each other. The present Niazi government has deprived the poor and labourers of bread after the prices of the commodities and utility items rocketed during the past nine months of his misrule,” he pointed out.
He said that the flawed policies of the present government had almost buried the economy and such policies ruined the lives of the people across the board. “Amid these devastating situations, only the PPP is capable of creating a balance between the employers and the employees through fair and workable policies and programmes,” he added. Bilawal reminded that PPP founder Zulfikar Ali Bhutto had in his time pioneered the labour policy and trade unions’ rights, and again it was the PPP government that introduced “Benazir Employees Stake Option Scheme” through which the employees benefitted from free shares in their respective company.