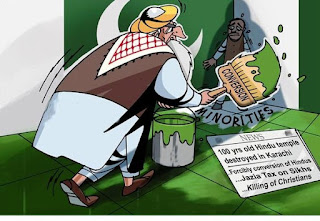 One of the common refrains one gets from apologists of the religious apartheid when one speaks of the denial of basic and fundamental human rights to Ahmadis in Pakistan is that if they, the Ahmadis, accept their status as non-Muslims, they would be given all their rights as Pakistanis. As if we are giving Non-Muslim minorities any of their citizenship rights. Admittedly, the position of Christians, Hindus, Sikhs and others is slightly better than Ahmadis who are not even considered human beings by our religious fascists, but even so, the position of Non-Muslim minorities is not even that of second-class citizens.
As the elections fast approach and the country is under virtual martial law designed to favour one particular party, nobody is even discussing the continuing marginalisation of religious minorities in our political system. Since the separation of Bangladesh, Pakistan’s religious minorities have numbered less than five percent of the population. Under the 1973 Constitution, this obviously raised questions about their representation. Initially this was resolved through an in-house election of MNAs and MPAs for Non-Muslims. Then General Zia-ul-Haq introduced separate electorates. This meant that Non-Muslims divided up into Christians, Hindus, Ahmadis and other minorities could elect up to 10 members through direct election but could no longer vote for general constituencies or Muslim constituencies.

If we justify constitutional discrimination and unconscionable bars against minorities as an Islamic Republic, then we should at least give them this right of voting both jointly and separately so they can have some voice

This was overturned by General Musharraf’s regime, which reintroduced the joint electorate. Reserved seats for Muslims would now be distributed amongst political parties in proportion to their numbers on general constituencies. The truth is that both these systems have failed to provide effective representation and political influence to the tiny Non-Muslim population in Pakistan. While the separate electorate system provided them with elected representatives, it alienated them from Muslim legislators in the country. Separate electorate in any event can only work if the minorities amount to around 25 percent of the population. Anything below 10 percent means nothing but alienation and irrelevance. Similarly, the joint electorate has given them some influence on Muslim legislators but the representatives they get in the assembly are all essentially yes men of political parties that appoint them. For example, even the JUI-F has had a Christian on one of these reserved seats, despite the fact their agenda is entirely anti-minority in every way.
There are two ways this could be rectified. One would be a primary election for representative Non-Muslims who could then be fielded as list candidates by various political parties. This would require each party to actively engage with the minority communities and ascertain their views. However this would be a complicated process and will not always be fair. The other easier way would be to grant Non-Muslim citizens the dual right to vote, allowing them to both participate in joint electorate and also elect their own representatives by separate electorate. Some would deem this a violation of the ‘one person, one vote’ principle. However let us not forget that the Pakistan of today is not the Pakistan envisaged by the founding father on August 11, 1947.
Instead of erasing religious differences, successive regimes have only exacerbated them over time. Under the 1973 Constitution, the offices of the President and Prime Minister are reserved for Muslims alone. Given that this discrimination at the highest level seems to be non-negotiable for the increasingly intolerant and paranoid Muslim majority in this country, does justice not demand that the Non-Muslims should at least be given the dual vote as restitution for it?  After all if you are going to so blatantly discriminate against citizens of Pakistan, what is so wrong with ensuring that they at least have a voice in matters directly pertaining to them and their locales?
This would not even be affirmative action but simply quid pro quo for the fact that a Pakistani citizen who is not a Muslim can never aspire to the highest office in the land. It would be a totally different story if Pakistan was a secular state and blind to the religious affiliation of its citizens, but we have failed to achieve such a state. If we justify constitutional discrimination and unconscionable bars against minorities as an Islamic Republic, then we should at least give them this right of voting both jointly and separately so they can have some voice. In any event, 10 seats are far too few in terms of proportion. Non-Muslims should have at least 17 reserved seats.
The Christian Democratic Party, which represents a sizeable number amongst Pakistani Christians, has been demanding the right to vote on these reserved seats. Its president, Ben Hur Gill even petitioned the Supreme Court during the 18th and 21st Amendment case, but only Justice Jawad S Khawaja was willing to listen. Now the CDP has decided to boycott the elections altogether. Next they are determined to call for mass migration out of Pakistan. The oppression that Non-Muslims face in Pakistan is not very different from the persecution minority groups have always faced throughout history.
Even in the Islamic tradition, this makes Hijrat mandatory. In face of persecution and violence of this magnitude, especially when all parties have made theological debates an election issue, would it not make sense for as many Non-Muslims to try and leave? It will be a great tragedy for Pakistan of course, but this country has long lost its way. It has become a majoritarian state with no recourse or way out for those minorities who are unfortunate enough to be born here. A couple of years ago when Ben Hur Gill first suggested that he would be forced to call for mass migration one day, I told him to give us another chance. Now I find myself in agreement with him. This does indeed seem like the only possible course of action left for religious minorities in Pakistan. Perhaps they should leave while they still can, because the Muslim majority in this country will ultimately turn to genocide against them before ultimately killing each other. Ghulam Abbas, the great Urdu short story writer, predicted this much in his classic Hotel Mohenjodaro in the 1960s. Soon there will only be ruins left in what was once a young country with great potential.

Under the new bill, Pakistan is not required to take any action against Haqqani Network or the Lashkar-e-Taiba (LeT), and will also not get any reimbursement for its counter-terrorist activities in the country.

Troubles seem to be mounting for Pakistan as the US has decided to cut its financial aid by over 75 per cent to $150 million from $1 billion. Amid Pakistan's poor economic conditions, the US decision could deeply hurt its shaking economy. Under the defence spending bill passed by the US Senate, the US could cut aid to Pakistan as the country is no longer required to take actions against terrorist groups inside the country. Pakistan's total public debt stands at $199 billion, of which $134 billion is domestic debt while the rest is external liabilities.
The National Defence Authorisation Act, 2019, states that Pakistan is not required to take any action against Haqqani Network or the Lashkar-e-Taiba (LeT). Pakistan will also not get any reimbursement for its counter-terrorist activities in the country. The bill was passed by 87 to 10 votes in the US Senate, following which it now awaits US President Donald Trump's approval.
"The legislation reduces the total amount of funds provided for reimbursement to Pakistan to $150 million. This is a significant reduction from the $700 million that was authorised through Coalition Support Fund (CSF) last year," Anish Goel, who was part of Barack Obama's White House National Security Council, said.
The Pentagon no longer had any tools to put pressure on Pakistan to undertake counter-terrorism activities or action against the Haqqani Network, said Goel, who till recently was a senior staffer in the Senate Armed Services Committee.
The previous Obama administration used to disburse $1.2 billion per year to Pakistan under the Enhanced Partnership with Pakistan Act of 2009, also known as the Kerry-Lugar-Berman Act, but Trump has taken a tough stance against Pakistan's inability to handle terrorism activities on its soil. Before this, the US had cut $1.5 billion worth of aid to Pakistan in January over its closeness to China and its failure to act against terrorist groups like the Afghan Taliban and the Haqqani Network.
As Pakistan's PM-elect Imran Khan is about to take oath on August 11, the country is reportedly drawing up a plan to seek a massive $12 billion bailout package from the IMF, a move that has been strongly opposed by the US. US Secretary of State Mike Pompeo had last week cautioned the IMF against a possible fresh bailout for Pakistan's new government to pay off Chinese lenders who have invested in the strategic China-Pakistan Economic Corridor (CPEC). Both Islamabad and Beijing have worked together on this "flagship" project under the ambitious Belt and Road initiative to build railway projects, roads and maritime links. Over 20 CPEC projects worth over $27 billion are currently being implemented all across Pakistan. In the name of CPEC, China has been consistently helping Pakistan with financial loans. But Pakistan has no concrete plan to pay them back.
The country needs around $3 billion of immediate funds to avoid default on loans from the IMF, China and the World Bank. Its ever-expanding trade deficit and declining foreign reserves leave no option for the new government but to knock on the IMF's door. The US, which is the highest contributor of funds to the IMF, has warned the global fund body, saying it should "think twice".
Joshua White, who was also a part of Obama's White House National Security Council team and worked on Pakistan, said: "It makes Pakistan ineligible for Coalition Support Funds (CSF), but adds Pakistan to a list of countries that can receive a related form of assistance designed to help partner nations bolster border security. This legislation is a mixed blessing for Pakistan."
Imran Khan, whose party won 115 of the 270 National Assembly seats, gained victory in the recent National Assembly polls on the promises of ending corruption and bringing economic stability. 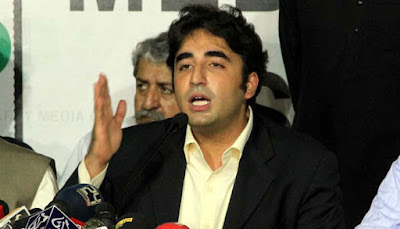