Two teenagers were electrocuted by their own families in Pakistan after eloping, police say.
The so-called "honor killings" have led to the arrest of both victims' fathers and at least two other relatives who carried out the judgment of a jirga, a local court that is convened to settle local disputes, particularly those related to women. Such tribal councils are illegal but are often honored by local officials.
Bakhtja, 15, and her boyfriend Waliur Rehman, 17, ran away August 14 because their families did not approve of their relationship, said Aman Marwat, a police official at Shah Latif town in the southern port city of Karachi.
"They loved each other and had eloped … due to fear of their families," Marwat told VOA Deewa. "The families promised them a consented marriage if they come back home. Both returned home on August 15. The same day, following the approval of the tribal council, both the boy and girl were killed with electric shocks."
News of their deaths did not emerge until an informant recently told police. A local court on Wednesday ordered exhumation of their bodies, which reportedly had been buried in secret.
The couple originally belonged to the tribal region of Mohmand agency along the Afghan border, where Pakistan's army has fought a Taliban insurgency over the past decade.
Hundreds of women are killed every year in Pakistan, often by their own relatives, for going against their families' wishes in matters of love and marriage. Amid a trend toward conservatism, the local Aurat Foundation has reported a 70 percent increase in honor killings in the past year.
"Laws are in place against such crimes committed in the name of honor, but they do not get implemented," Zehra Yusuf, a member of Human Rights Commission of Pakistan, told VOA Urdu. She blamed "conservative customs and norms of society and widespread ignorance for such crimes."
No comments:

Revival of Int’l cricket in Pakistan is a good omen: Bilawal

Chairman, Pakistan People’s Party (PPP), Bilawal Bhutto Zardari while congratulating Pakistan team on winning inaugural Independence Cup match has said that the revival of International Cricket in Pakistan is a good omen.
He said that holding of the independence cup matches has improvee the image of the country, according to a statement issued here on Wednesday.
The PPP chairman said that if sports would take place in grounds then the youth would engage themselves in positive activities and they could be reined in from extremism. He said that his party would continue promoting cricket.
Bilawal also welcomed the foreign cricket players participating in the Independence Cup competition.


Pakistan is home to many Islamist terrorist groups. Some enjoy a permissive environment despite technically being banned by the state. This has enabled them to acquire political power. Politicians sometimes court terrorist leaders to turn out voters.While researching counterterrorism a few summers ago, I met with a high-ranking Pakistani official to talk about his decision to attend a campaign rally with the leader of a proscribed terrorist organization. He admitted that getting the terrorist leader to turn out voters for a politician was his motivation. He also suggested that encouraging such men get into politics was better than seeing them remain involved in terrorism.I thought of that conversation last week when Pakistan’s election commission refused to recognize the Muslim Milli League, a new political party started by the social welfare arm of Lashkar-e-Taiba, the militant group notorious for the 2008 Mumbai attacks that killed 166 people. The election commission also warned independent candidates for office not to use the party’s name in campaigns. If the commission had recognized the Muslim Milli League, that would have in effect allowed a terrorist organization to contest elections. It could have opened the door for other militant groups in Pakistan — and several militant groups were already gearing up to establish their own political parties.Pakistan has a long history of political parties using violence to prevail in elections. Some parties have armed wings. Others rely on associated militias and criminal networks. Religious parties with ties to terrorist groups have contested elections for decades. Members of outlawed terrorist organizations have also won elected office as independent candidates. While no such organization had ever started its own party, Lashkar-e-Taiba and its social welfare wing, Jamaat-ud-Dawa, appeared well positioned to lead the charge.On the advice of Inter-Services Intelligence Directorate, Pakistan’s powerful spy agency, the group has changed its name several times since the Sept. 11 attacks to evade sanctions and escape bans.The Pakistani government still differentiates between Lashkar-e-Taiba, which is banned, and Jamaat ud Dawa, which is not. In reality, they remain two sides of a single organization, led by the same individuals. The military and the intelligence service still support the group. It remains their most reliable terrorist ally against India, sends fighters to Afghanistan, and has helped to combat separatists in Baluchistan, which borders Iran and Afghanistan.But militancy is not the group’s only mission. It is also dedicated to proselytizing and nonviolent reformism intended to turn Pakistan into a “pure” Islamic state. Many Pakistanis see Jamaat-ud-Dawa, which runs hospitals and ambulance services across the country, as a robust social welfare organization, and not an alias for a lethal terrorist group.Debates about whether to take part in elections have been continuing for years, according to Laskhar-e-Taiba officials I have spoken with. Yet starting a political party was a major step for an organization whose longstanding position was that Islam forbids participation in electoral politics.The attempt to begin a party occurred at a time when the group and the Pakistani government are under increasing international pressure. Pakistan might make a cosmetic distinction between Lashkar-e-Taiba and Jamaat-ud-Dawa, but the United States and the United Nations have designated both as terrorist groups. The Financial Action Task Force, an international body focused on combating terrorist financing, has also zeroed in on Jamaat ud Dawa and its leader Hafiz Muhammad Saeed.To placate the United States, the Pakistani government placed Mr. Saeed under house arrest in January and put his organization on a watch list for groups that may be involved in terrorism.Recasting their organization as a political party could have provided Mr. Saeed and other leaders with more influence over how the state deals with their group. It also would have given them greater freedom to operate, especially when it comes to raising money. Rather than sucking recruits and resources away from Lashkar-e-Taiba, a new political party could have drawn in more of both. In addition to political cover for its terrorist activities, this would have been another mechanism to influence the domestic discourse and promote hawkish policies toward India.In theory, entering electoral politics can have a moderating influence on terrorist organizations and perhaps even create conditions for mainstreaming them.Wasn’t it preferable, the Pakistani official had asked me, for militants to involve themselves in elections than to continue engaging in terrorism? Of course, it was. Except Pakistan had never forced them to choose between terrorism and politics. Instead, these men and the groups they led have been allowed to ply their terrorist trade while simultaneously increasing their political power.It would be naïve to think that the election commission’s decision is a harbinger of a shift in terms of Pakistan’s policy of supporting and tolerating militant groups. The men who lead them continue contesting elections as independent candidates and may persist in their attempts to register their proscribed organizations under different names. But for the moment, the election commission has held the line against allowing terrorist organizations to contest elections in Pakistan.

Pakistan - We are ‘Aung San Suu Kyi’ in disguise 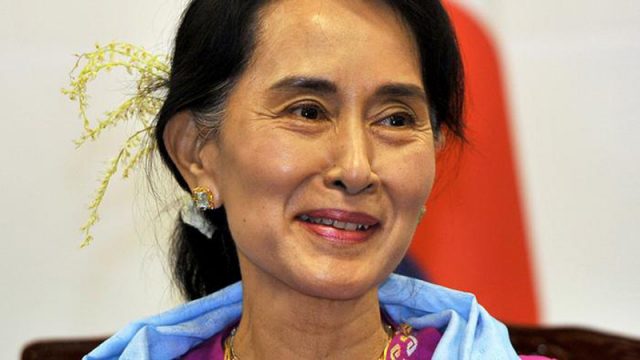 As the plight of the Rohingya’s Muslim of Burma goes from bad to worse, opinions in Pakistan is same like the rest of the world. Everyone here want the atrocities of Rohingya’s to end and a permeant solution of the crisis, acceptable to all stakeholders including Rohingya’s and Myanmar state, on the table.
Our government’s stance seems quite clear on the issue. National cabinet has passed a resolution against the Rohingya’s genocide in Myanmar. Islamabad foreign office has urged the world to put pressure on Myanmar to end state patronized mass killing. These sentiments are not found in Pakistanis only, worldwide people are calling to settle the crisis and to stop human right violations.
Two days back I found a news that PEMRA has issued a notice to actor cum anchor Hamza Abbasi on controversial remarks about Pakistani Passport on his TV show regarding Rohingya’s Muslim. Without getting in the debate whether his remarks were objectionable or not, the surprising fact I found in that show was that we have over half a million population of Rohingya’s living in Karachi. I was aware of presence of large Bengali population in Karachi, but Rohingya’s who migrated in mid 80’s and late 90’s to Pakistan from Myanmar was surprising to me. Knowing that they are living undocumented and without an identity in the largest metropolitan city of Pakistan was rather alarming.
In a city severely affected by ethnic, sectarian and political instability and violence, a huge population of undocumented immigrants is a national threat, same like the Afghan refugees. The point here is not to make them leave the country, like Myanmar, but to manage and administer them. Census 2017 has shown 59 percent population rise in Karachi city in last 19 years. Bengali’s and Rohingya’s constitute a significant portion of Karachi population. Without acknowledging their existence and providing them an identity, we had seriously disturbed socio-cultural and demographic dynamics of Karachi. The political history and landscape of Myanmar and Pakistan have several things in common. Political parties of both the countries take pride in their heroic defiance of the military junta, though both sides have an unfinished agenda on democratic transition. Enormous powers are vested in the military. The consolidation of hard-won freedom will remain arduous task unless both the countries make efforts to mainstream the excluded and isolated minorities and communities from the political process.
The inflow of Bengalis and Burmese immigrants dates back to Zia’s liberal policy towards Muslim migrants and refugees. But the same mistake was repeated with these migrants as we did with Afghan refugees. We let them roam everywhere. We left them unmanaged, which resulted negatively for us and for them too. Now this community is vulnerable to harassment in hands of police and other law enforcement agencies. Without any identity they cannot have formal jobs. This situation compels the community youth to join ethno-political and religious parties, Jihadi groups and criminal gangs to seek shelter and security and in return, these groups use them for their political and violent activities.
Many argue that we are not ‘Thekaydaar’ of humanity, we have to pursue and secure our national interest. ‘Pakistan First’ should be our core policy. I agree! But this very issue of Rohingya’s in Karachi is our problem now. We need to do something about it at earliest. Rangers operation in Karachi will never bear fruit unless we take these administrative issues in hand seriously. Making a community live in grimy slums and filthy metropolitan neighborhoods makes us no different than pitiless Burmese regime. In current situation, we all are ‘Aung San Suu Kyi’ in disguise. I say people living in glass houses should not throw stones.