If democracy depends on the consent of the losers, then Pakistan cannot claim to be a democratic country. Oh sure, we have our elections, our majestic Assembly building, and all the trimmings of democracy. But rarely, if ever, have the losers conceded that the electoral process was fair and transparent. Unfortunately, they are usually right. There are too many examples of rigging to cite here, but just the last election will do to illustrate my point. For starters, the computerized system went down for hours in key constituencies, raising suspicions that the results were being massaged. No inquiry has been held to the best of my knowledge. Opposition candidates were allegedly threatened before polling day. Other shenanigans have robbed the 2018 election of much of its credibility. So why do similar things not happen in other countries of the region? I have followed elections in Sri Lanka over the last 20 years, and can attest to the bitterness of the electoral battles that have been fought. But results have been accepted with good grace; it must be said there has been little tampering that could have altered the overall result. We’ve been reduced to a country that has to rely on handouts. In India, too, despite the size and complexity of the general elections, there have been few complaints of electoral fraud. At worst, there have been accusations of the ruling party misusing state resources, but these again have been insignificant when set against the vast distances that candidates have to cover. So what do these two countries have in common that we lack? Firstly, election commissions are independent, and fully backed by the executive and the judiciary. Secondly, and most importantly, the security establishments in both countries are not players in the elections. They, therefore, have no reason to dabble in the process, and back or thwart any party. This, sadly, is not the case in Pakistan. As the Asghar Khan case before the Supreme Court established decades ago, the ISI was allegedly directed by the army chief of the day to dole out cash to candidates to block an outright PPP victory. To this day, there has been no judgement in this historic case. From all this, I can draw one lesson: the more open and transparent the elections, the less interested some elements in the establishment are in the outcome. The murkier the poll, the greater their interest.Once elected through a flawed process, the prime minister is bound to be beholden to his patrons, losing much of his power. And if he tries to assert his independence, just look what has happened to Nawaz Sharif twice in his career.Most people with any moral fibre would resist taking orders, especially if they have just won a popular mandate. But if this majority has been manufactured, then obviously, the right to rule becomes questionable.The power of the establishment was on display recently when the Army Act was amended at record speed by parliament. After all the bold words uttered by members of two major opposition parties, as well as the changes they threatened to make to the proposed legislation, in the end they rolled over.Whenever they have had the opportunity to redress the balance of power between elected civilian leadership and the establishment, our politicians have invariably folded. Soon after Osama bin Laden was killed in his Abbottabad lair by an American commando team in 2011, a special session of parliament was called to hear an explanation for this humiliating intelligence failure. Gen Pasha, then ISI chief, took full responsibility for the fiasco, and offered to resign. But most of the assembled lawmakers refused to accept his resignation, blowing a golden opportunity to hold the establishment responsible for its failures. Over the years, our standing in the world has declined: once a proud nation that was able to punch above its weight, Pakistan has been reduced to a country that has to rely on handouts from Saudi Arabia, China, the US and the IMF to keep afloat. Surely the day will come when they will refuse. But it’s not just the establishment that has been such a burden on the exchequer: debt servicing and corruption have played their malign roles as well. And if the powers that be have skewed our foreign policy without having the flexibility to alter course according to changed circumstances, there has been little resistance from our politicians. When Turkey’s President Erdogan finally cut his coup-prone army down to size, he was able to do so by virtue of his government’s ability to vastly improve the economy, and generally deliver much better governance. These conditions do not exist in Pakistan. Firstly, the prime minister controls only a relatively small part of the budget, so he is much constrained. Secondly, he or she has to contend daily with a tough puppeteer. https://www.dawn.com/news/1529032/whos-in-charge
No comments: Links to this post 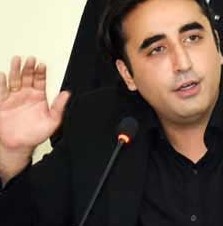 Pakistan People Party (PPP) Chairman Bilawal Bhutto Zardari while expressing concerns on wheat shortage said that the government has turned the wheat-producing country into a wheat importer.
Reacting to rising wheat prices across the country, the Chairman PPP expressed concerns over the wheat crisis and said that the Federal Government had deliberately created a shortage after exporting 40,000 metric tonnes of wheat to Afghanistan.
He accused Imran Khan of creating a flour crisis to provide benefits to special friends as government warehouses are full of flour.
He added that the selected Prime Minister has failed as ‘taking notices’ will not end crises. The supply of flour to Khyber Pakhtunkhwa is closed for five days.
The chairman of the PPP said that Khyber Pakhtunkhwa’s provincial minister is advising the people not to eat fine flour and prices increased second time in a week exhibiting complete failure of the government.
He added that the country is selling flour at the most expensive prices in history.
https://dunyanews.tv/en/Pakistan/528548-Bilawal-Bhutto-expresses-concern-over-nationwide-wheat-crisis-
No comments: Links to this post 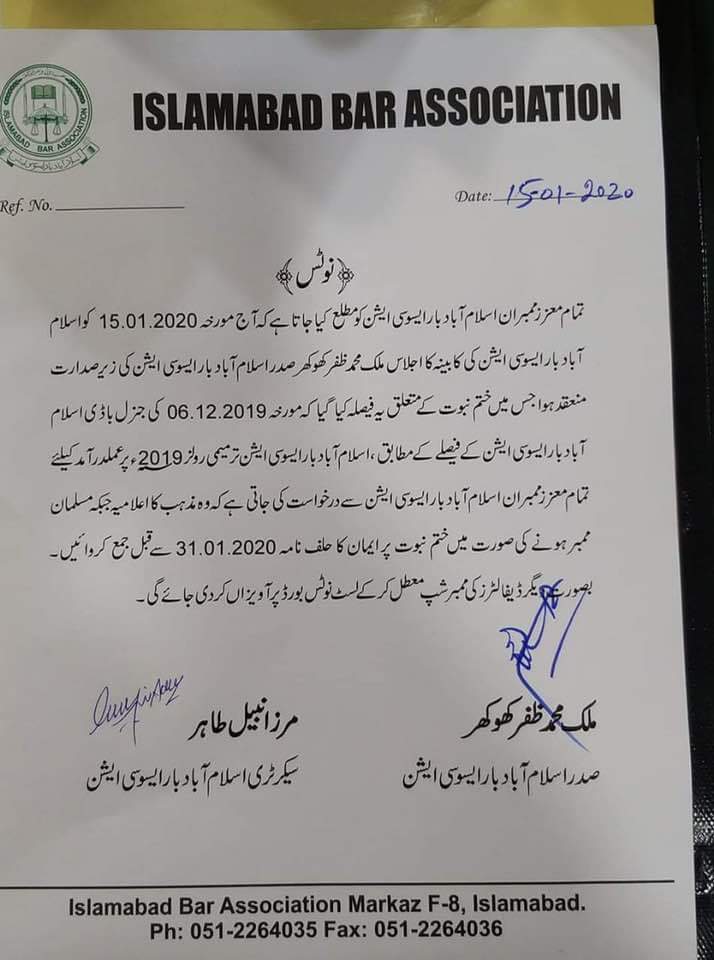 To disguise weaknesses under the faith this time
the Islamabad Bar Association takes the reins and made it mandatory for the bar members to declare their faith through an affidavit before January 31. 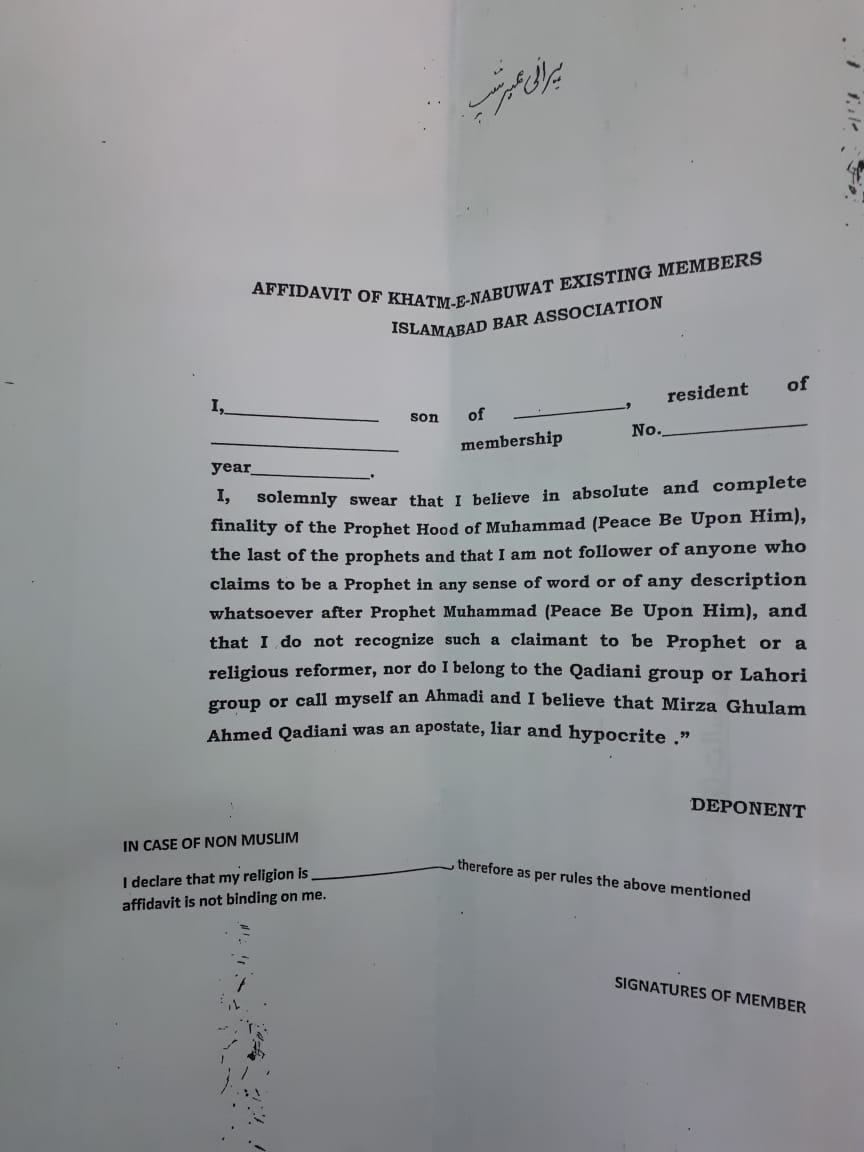 According to the news that appeared on Friday, the Islamabad Bar Association hunted to probe profoundly the religion of the bar members — to such extent that if someone declares themselves a Muslim, then they are obliged to fill another form to proclaim their faith in the finality of Prophethood.

A mix of feeling portrayed by different analysts over the news when contacted, some feared this would embark hatred among non-Muslims and it is contrary to  Islamic teachings while others of the view that religion is an integral part of life thus if anyone belongs to any other religion, then he must openly admit it, as it is no good to hide your — identity.
Nonetheless, in the time being a Prime Minister Imran Khan-led government should ensure to retain the authority for using the cap of religion for their means. — Last year in March a controversy arose in Rahim Yar Khan when the shopkeepers received an alleged pamphlet indicating the SHO that warns to close down all shops before Friday prayers.
https://dailytimes.com.pk/541760/islamabad-bar-association-asks-members-to-declare-their-faith/