Video - Lupita Nyong'o - Why "Black Panther" Is a Different Kind of Superhero Movie: The Daily Show

Video - #Sridevi's Emotional Message To Her #Pakistani Co-Stars Of MOM 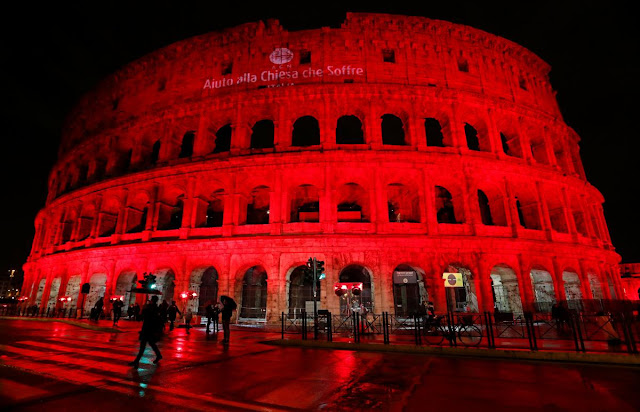 Hundreds gathered on a rainy night outside the Roman amphitheatre that is a symbol of the martyrdom of early Christians to hear the husband and daughter of Asia Bibi.
The Catholic woman has been living on death row in Pakistan since 2010, when she was condemned for allegedly making derogatory remarks about Islam after neighbors objected to her drinking water from their glass because she was not Muslim.
Human rights groups such as Amnesty International say the blasphemy law is increasingly exploited by religious extremists as well as ordinary Pakistanis to settle personal scores.
“The aim of the blasphemy laws is crush people who believe differently,” Archbishop Nunzio Galantino, secretary-general of the Italian bishops conference, told the gathering.
The law does not define blasphemy and evidence might not be reproduced in court for fear of committing a fresh offense. There are no penalties for false accusations.
Asia Bibi’s case drew international attention after the murder of two politicians who tried to intervene on her behalf. At the Rome gathering, her husband Ashiq Masih said his wife was innocent of blasphemy. “This is just hate against Christians, who are considered impure,” he said.
The husband and daughter, who broke down in tears as she addressed the group, were earlier received by Pope Francis, who told her: “I think often of your mother and I pray for her”. European Parliament President Antonio Tajani, who has been tipped as a possible Italian prime minister after next week’s election, said that persecution of Christians was “a genocide”.
“A message must be sent from this place. It is the duty of Europe to defend these values (of religious liberty) wherever on earth they are trampled on,” Tajani said. Rebecca Bitrus, a Nigerian Christian woman who was held for two years after she was abducted by Boko Haram Islamist militants, told of how she was repeatedly beaten and raped.
During the event, organised by the Catholic group “Aid to the Church in Need,” there were live link-ups with Aleppo, Syria and Mosul, Iraq, both of whose minority Christian populations have been hit hard by wars.
No comments:

Amartya Sen
It is hard to find a measure of Asma Jahangir’s greatness. She was a brilliant intellectual, a superb humanist, a great political leader, an epitome of kindness, a personification of indomitable courage. Asma was all these things — and much more. Professionally she excelled as a magnificent lawyer — who did more than anyone else I can think of to defend and save helpless people from the unjust wrath of authoritarians and tyrants. As one of the most distinguished human rights lawyers in the world, Asma used her legal knowledge to protect the vulnerable and unimaginably strengthen people’s rights. 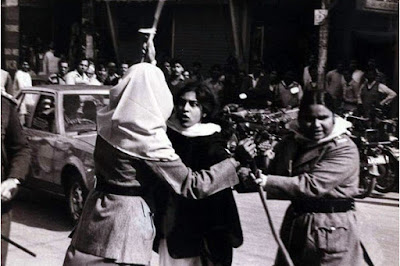 As it happens, Asma Jahangir’s first legal victory came before she became a trained lawyer. She won a great legal victory in freeing her father, Malik Ghulam Jilani, the Parliamentarian and critic of the military, who had been unjustly incarcerated by the Government. At the time of her victory at the Supreme Court (in a case celebrated as “Miss Asma Gilani vs the Government of Punjab”), Asma was barely twenty years old. Later, with professional legal training and far-reaching vision, combined with her exceptional intelligence, Asma became the leading defender of human rights in Pakistan, in the company of other great human rights activists like I.A. Rehman and Dorab Patel. It is extraordinary to see how much the Pakistan Human Rights Commission has achieved in the cause of justice, without even having the firm legal — and constitutional — status that, say, the Indian or the South African Human Rights Commission can comfortably rely on (those commissions have a much easier job than the Pakistan Human Rights Commission, which — despite that legal handicap — has achieved no less, particularly through powerfully mobilizing public opinion and involvement).

Even though Asma has left us, musn’t just bask in her glory, but also continue to be guided by what she has taught us. The angel of humanity may have gone, but the great inspiration and the penetrating education we have got from her are here to stay

I personally think that in understanding Asma’s success, it is important not only to appreciate the strength of her skilled arguments, her trained reasoning and her deep-rooted courage, but also the tremendous warmth of her personality including her radiating friendliness. She generated enthusiasm across the world, but particularly on the two sides of the subcontinental divide. Asma was loved in Pakistan, but no less in India, and whenever she gave a talk in India, the room — whatever its size — was always overfull. She communicated an amazing closeness that was felt by all. It was her companionable personality, in addition of course to the force of her reasoning, which helped her to bring judges, even in most difficult cases, to see her arguments with sympathetic clarity. It is amazing how Asma won case after case against what seemed like insurmountable adversity.
I have been extraordinarily privileged to have Asma as a close friend for nearly two decades. I first met her when we were both members of a joint Indo-Pakistani initiative to engage the citizens of the two countries to talk more with each other (Asma was the co-chair of the group, along with the former Prime Minister I.K. Gujral on the Indian side). I was awestruck by the clarity of Asma’s mind as well as her boundless humanity and warmth. We had the chance to talk a great many times in many different places when we met (as we did frequently), but we had the most wonderful opportunity to talk endlessly when she and her wonderful husband, Tahir Jahangir, stayed with us at the Master’s Lodge of Trinity College in Cambridge. We were often joined by her younger daughter Sulema, also a lawyer. I learned a huge amount from Asma about how to think about one’s priorities and duties in the most complex of circumstances.
One of the most fulfilling moments of my life came last year when Asma spoke at the London School of Economics, in a lecture named after me — I have not done anything to deserve it (I hasten to add) but the LSE has such an annual series. Asma explained to nearly a thousand students and teachers at the LSE how to fight injustice related to religious intolerance, using democratic means (a subject that seems to become more and more important across the world). Her ideas were buzzing around the LSE for many weeks.
Activist lawyers, especially those who lead human rights movements, are often in danger of violent attack by people whose despotism and oppression are threatened. In Shakespeare’s Henry the Sixth, Part Two, when Jack Cade with recently acquired — indeed ill-acquired — power talks about his policy priorities, one of his followers, Dick the Butcher, says, “The first thing we do let’s kill all the lawyers” (4,2,1,78).
Asma had to face many such Dick the Butchers in her committed and dedicated life. But my fearless friend continued to speak, argue, plead, guide, and lead the movements she had founded and built, without being at all deterred. Threats and dangers could not stop her. Nor could they reduce the force of her reasoning. Nor diminish her extraordinary warmth and humanity which captivated all.
Even though Asma has left us, we can still not only bask in her glory, but also continue to be guided by what she has taught us. The angel of humanity may have gone, but the great inspiration and the penetrating education we have got from her are here to stay. At this tragic moment, there is comfort in that thought — and we can have pride in having known so perfect a human being.
No comments: 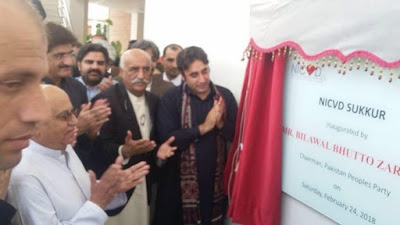 Chairman, Pakistan People’s Party (PPP), Bilawal BhuttoZardari has said that the PPP government has taken revolutionary steps in providing health facilities to the people of Sindh, adding that he has challenged to all chief ministers of the other provinces to establish similar facilities in their provinces.


He said this during the inauguration of the fifth satellite center of the National Institute of Cardiovascular Diseases (NICVD) in Sukkur on Saturday
He said that facility established in collaboration with the Sindh government was in consonance with PPP’s policy aimed at providing quality healthcare facilities to the masses at their doorstep,
He appreciated the NICVD for setting a precedent by providing free of chargequality care to its patients without any distinction.
PPP Chairman said that It is heartening to see that they are now fast on their way to initiate major cardiac facility for both adults and children in comparatively smaller towns of the province.
Bilawal on the occasion particularly appreciated doctors and other personnel associated with NICVD for getting materialised the vision of Shaheed Zulfikar Ali Bhutto and Shaheed Benazir Bhutto.
PPP Chairman further said that issue-based politics, not Panama or Iqama, are the need of the hour.“No one is focusing on issue-based politics, no one is paying any attention to the issues faced by the common man, he added.
He continued to claim that his party had done extensive development work in the province, when others have only destroyed the province.
He said that we must have made mistakes too, but we have done the most to make lives of this province’s citizens better.
On the occasion, Chief Minister of Sindh Murad Ali Shah, Leader of the opposition in NA Syed Khursheed Ahmed Shah, Information and Labour Minister Syed Nasir Hussain Shah Health Minister Sindh Dr Sikandar Ali Mandhro, NICVD Chief Executive Dr Nadeem Qamar also spoke on the occasion.
No comments:

#Pakistan - No one pays attention to health, education, employment in the country: Bilawal Bhutto


PPP Chairman Bilawal Bhutto Zardari on Saturday said, alluding to deposed prime minister Nawaz Sharif’s narrative, that issue-based politics, not Panama or Iqama, are the need of the hour. “No one is focusing on issue-based politics, no one is paying any attention to the issues faced by the common man,” said Bilawal, while addressing the inauguration ceremony of National Institute of Cardiovascular Diseases (NICVD) in Sukkur. In another apparent reference to Nawaz, he said that some people are trying to wreck the entire system just to save their family’s reign. 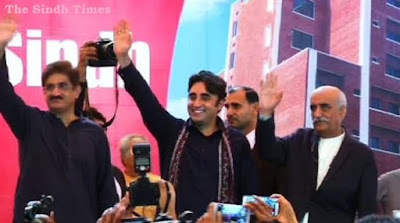 “No one cares about Panama [case] or iqamas,” he said. “No one is paying attention to health, education, and employment issues in the country.”
Lashing out at Nawaz further, the PPP scion further said that while the deposed premier now insists on respecting the sanctity of vote, he was frequently absent from parliament sessions during his tenure.
“A VIP accountability process is underway with Nawaz and his family,” he said. “The law should be one for all.”
He questioned former president Pervez Musharraf’s exit from the country.
“What is it in Nawaz and Musharraf’s blood that is different from Sharjeel Memon and Dr Asim Hussain?”
The PPP chairman continued to claim that his party had done extensive development work in the province, when others have only destroyed the province.
“We must have made mistakes too, but we have done the most to make lives of this province’s citizens better.”