The brief Modi-Imran encounter in Bishkek didn’t break any ice and the room for dialogue between the neighbours is restricted.

Prime Minister Narendra Modi exchanging pleasantries with his Pakistani counterpart Imran Khan in the Kyrgyz capital of Bishkek is anything but thawing of ice between the sparring neighbours.
India has sent a clear signal to Pakistan in Bishkek that “it is neither ready for talks nor is it willing to soften its stance” in the near future unless Pakistan is able to prove that it has indeed stopped sponsoring terror in its country, top Indian sources told ThePrint.
Friday’s brief encounter between the two prime ministers was the first time the two leaders came face-to-face after Khan’s election as Pakistan’s prime minister last year and Modi himself returned to power for a second term last month.
The leaders, the sources said, crossed each other’s paths several times during the Shanghai Cooperation Organisation (SCO) summit meeting. But neither made an effort to break the ice.
The SCO summit took place in the Kyrgyz capital on 13-14 June. Both India and Pakistan are members of the China-led group since 2017.
https://theprint.in/diplomacy/modis-bishkek-message-to-imran-khan-forget-talks-until-you-end-terrorism/250498/
No comments: Links to this post

According to PML-N spokesperson, Marriyum Aurangzeb, Bilawal has “accepted the invitation and he will arrive at Raiwind tomorrow afternoon”.
Reportedly, the meeting which is expected to take place on Sunday at 1:30 pm, will be attended by close aides from both political parties.
Media reports said that the two leaders will discuss the post-budget political environment in addition to the arrest of their respective fathers – Nawaz Sharif and Asif Zardari – in corruption references.
On May 19, the two political scions met at an Iftar dinner in Islamabad – hosted by Bilawal for opposition parties. While addressing a joint presser with PML-N leaders, including Vice President Maryam Nawaz and former premier Shahid Khaqan Abbasi, and Jamiat Ulema-e-Islam (JUI-F) chief Maulana Fazlur Rehman post-dinner, Bilawal hinted at the revival of the Charter of Democracy (CoD), saying that “the agreement has not ended and the new generation will keep on adding to it”.
He had further said that the opposition decided to join hands to find solutions to the issues the country is facing. He also announced that all opposition parties will launch a protest inside and outside the parliament after Eid.
Abbasi had said that all parties agreed that the government has failed in running the affairs of the country. He added that after Eid, an All Parties Conference (APC) would be held where a joint strategy would be formulated.
https://www.pakistantoday.com.pk/2019/06/15/maryam-invites-bilawal-for-a-meeting-at-jati-umra-on-sunday/
No comments: Links to this post

Bilawal Bhutto - 'Amnesty for rich, taxes and inflation for poor' 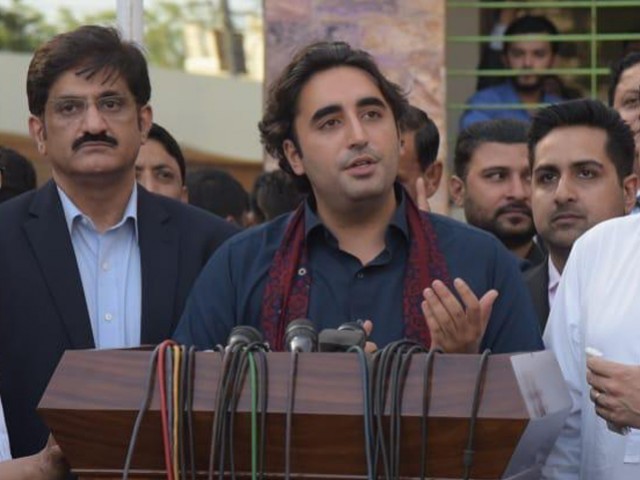 Pakistan Peoples Party (PPP) Chairman Bilawal Bhutto-Zardari on Saturday slammed the ruling party’s “anti-people IMF budget” and stated that while amnesty and bailouts have been provided for the rich, the poor of the country have been burdened with taxes, inflation and rising unemployment.
Addressing a press conference in Lahore, the PPP chairman stated that he was willing to support the ruling party if they had introduced a fair and people-friendly budget. “We gave them a chance, but we cannot support a budget that is against the poor of the country,” he added.
Bilawal also slammed the proposed cuts in higher education and health sectors and also mentioned social attacks in Punjab.
“The federal government is snatching the rights of provinces. 60% Pakistanis reside in Punjab but there has been an immense cut in its budget. Punjab’s labourers, aged pensioners and unemployed youth will bear the burden of their [PTI] incompetency. There was a Rs600 billion budget for Punjab previously and now it stands at Rs 200 billion,” he added.
Bilawal also added that PPP will not compromise on their principles of helping the poorest of the country, no matter how many people from his family and party are sent to jail.
Stressing upon the need to jointly resolve issues, Bilawal said he had accepted Pakistan Muslim League-Nawaz (PML-N) Vice President Maryam Nawaz’s invitation and will be meeting her on Sunday.
“We have different perspectives but no single party can resolve the issues of the country alone,” he added.
https://tribune.com.pk/story/1993256/1-amnesty-rich-taxes-inflation-poor/

How A Baby Caused A Revolutionary Change In Pakistan

This is a story about a fussy baby.
But don't worry, it has a happy ending.
On April 29, Mahjabeen Sheran of Balochistan, Pakistan, faced a problem familiar to every working mom.
She had a child care crisis. 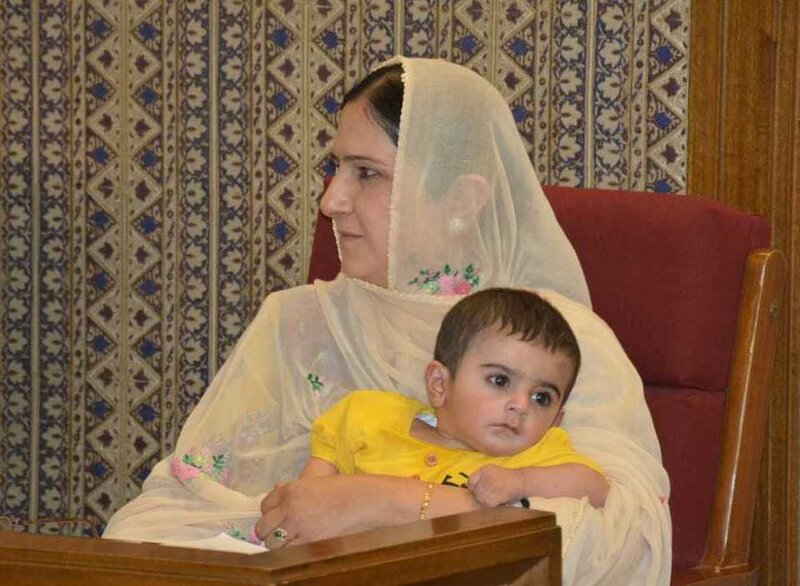 The family member who usually watches her 8-month-old son wasn't able to come to Sheran's home. And Sheran had a pressing work obligation. In 2018, she was elected to the parliament in Balochistan, the poorest province in Pakistan with the worst statistics for maternal and child health.
There was an assembly meeting on the 29th. Sheran, who serves as the secretary for law and parliamentary affairs and women's development, did not want to miss the session.So she brought her baby with her and left him in the care of a staff person in a room reserved for female members of parliament to conduct private business.Only her son was a little cranky. So Sheran brought him into the assembly. He wasn't crying, she says. But when she sat with her child in her assigned seat, there was an outcry.
One assemblyman joked, "There will now be baby feeders in the assembly." Another taunted, "There will be babies wailing in the assembly."
The secretary of the assembly said it was against the rules to bring in a child and instructed a member of parliament to tell Sheran to take her baby out of the room.
"I was so embarrassed and uncomfortable that I picked up my baby and left," she says. "I could expect this from male members, but I was so disappointed when I saw no female member stood up for me. They should have understood a mother's situation and boycotted the session." The breakdown in the assembly is 54 men and 11 women.
Sheran says that even if she broke a rule, there are lots of parliamentary rules that male members break. Eating and drinking in the assembly are prohibited, she says, "but it's normal that members are eating chocolate, chewing gum and drinking water."
She asks: "So rules can be broken if you are a man?"
After the experience, Sheran heard from many working moms who shared their stories about a lack of child care options. "One woman told me that a few times she brought her child to the office when she had no one to babysit the child at home," Sheran says. "She hid the baby under the desk when the boss came."
Indeed, the incident with Sheran illustrates the need for "gender-friendly workplaces" in Pakistan, says Farzana Bari, director of the gender studies center at Quaid-e-Azam University. "What happened with Mahjabeen was absolutely shameful. It would be a good step if day care centers will be established in the parliaments. This will not only be helpful for women, but men members should also utilize this facility to give their wives a relief and share equal responsibility."
"If parliaments have these standards, this will set an example," she says. Better options for child care might help Pakistan meet its "Vision 2025" goal, calling for an increase of women in the labor force from its current 22 percent to 45 percent.
And better child care might help Pakistan climb from its second-to-the-last spot on the Global Gender Gap Index.
Yusra Qadir, a young engagement and social inclusion specialist with UNDP, tweeted: "Gender parity can't be addressed if women are seen as sole custodians of homes and kids. With no public facilities for child care and such barrings [as in Sheran's case], how can women contribute equally .... Has some notice been taken?"
In fact, notice was taken.
Sheran now reports that the assembly members had a change of heart. "Everyone is showing sympathies, and they realized they were wrong." Shakeela Naveed, a member of the Balochistan assembly who was not present on April 29, said that what happened wasn't an insult of a member but "an affront to motherhood." What's more, on June 13, the chief minister of Balochistan, Jam Kamal Khan, pledged to establish a day care center in the assembly for the representatives as well as employees. It will be the first provincial assembly in Pakistan to have a day care facility. The fact that it's in the deeply patriarchal province of Balochistan is all the more remarkable. "I feel very proud of this achievement," says Sheran. "This will serve as a blessing for other mothers who will become a part of this parliament in the future." And she says she is working on a bill to "advocate for this facility in all government offices, universities and other institutions so that women can work with undivided focus and perform well in their professional lives."
The determined mom and assemblywoman promises: "I will not stop here." As she tweeted: "Day care centers aren't a luxury, they are a necessity!"
https://www.npr.org/sections/goatsandsoda/2019/06/14/732718725/how-a-baby-caused-a-revolutionary-change-in-pakistan
No comments: Links to this post