Daughter of Pakistan's revolutionary poet Habib Jalib is compelled to run taxi after stipend of her mother was stopped in 2014.
According to reports, Tahira Habib Jalib is serving as a captain of private taxi service in Lahore to earn their livelihood. The taxi, which she runs was also purchased after getting loan from a private bank.
The monthly stipend of Tahira's mother was Rs25,000, which was stopped in 2014 in the government of Shahbaz Sharif. The government of Punjab used to pay the stipend from the quota of the poets.
Talking to private TV channel, Tahira said, "The stipend as stopped days before my mother's death in 2014."
Tahira went on to say that she does not feel any shame in running the taxi as she is the daughter of Habib Jalib, who never compromised on principles till his death.
She vowed to follow the principles of her father and never compromise on these.
Tahira Habib urged the government to resume the stipend and introduce poor-friendly system so that the poor earn their livelihood without difficulty.
https://www.thenews.com.pk/latest/382060-pakistani-revolutionary-poet-habib-jalibs-daughter-runs-taxi-to-ear-livelihood
No comments: Links to this post

What Is Saudi Arabia's Grand Plan for Pakistan?

The European Asylum Support Office (EASO) published Tuesday a Country of Origin Information (COI) Report entitled ‘Pakistan security situation’. The report is the third update of the security chapter of the EASO COI report on Pakistan, Country Overview, published in August 20151 subsequently updated in July 2016 and August 2017. The report provides information relevant for the protection status determination of Pakistani asylum seekers.
In 2017, Pakistan ranked in the top 5 of countries of origin in the EU+ countries 2, with a total number of about 32,000 applicants. By the end of 2017, more than 47,000 cases remained pending at all instances. Throughout 2018, the country maintained this ranking in the top countries of origin and the total number of Pakistani applicants has remained stable.
The EASO COI Report ‘Pakistan security situation’ provides a general description of the security situation in Pakistan, covering the following topics: an overview of the recent conflicts in the country; actors in the conflict; an overview of recent security trends and armed confrontations; the impact of the violence on the civilian population; and the impact of the violence on the state ability to secure law and order.
The second part of the report provides an overview of the security situation in a more detailed description of the different regions in Pakistan. In each regional chapter, a short description is given of the region, the background of the violence as well as the actors present in the region, followed by a description of the security trends, and the impact of the violence on the population.
The main findings of the report include an overall decrease in total numbers of violent incidents and casualties throughout 2017 and 2018. However, security operations and armed clashes were still reported in all four provinces of Pakistan and in the FATA in the context of operation Radd-Ul-Fasaad. Militant groups also continued to conduct attacks in 2017 and 2018, including suicide attacks, targeted killings, and sectarian-related violence. In the run-up to the general elections held in July 2018, several violent incidents and some major attacks occurred throughout the country.
The report was drafted by the Belgian Office of the Commissioner General for Refugees and Stateless Persons (Cedoca, Centre for Documentation and Research) in accordance with the EASO COI Report Methodology 3. It was reviewed by experts from the Office for Country Information and Language Analysis in the Dutch Immigration and Naturalization Service, the Immigration and Asylum Office Documentation Centre in the Hungarian Office of Immigration and Nationality, the Department of Documentation and Foreign Cooperation in the Slovakian Migration Office, Lifos, the Centre for Country of Origin Information and Analysis in the Swedish Migration Agency and EASO, in order to ensure the highest quality.
It is EASO’s intention to continue to produce such reports on important countries of origin and to update them on a regular basis in order to raise and harmonise COI standards in the EU and to further support the practical implementation of the Common European Asylum System.

Pakistan Peoples Party (PPP) Chairman Bilawal Bhutto Zardari on Tuesday said the PPP was striving to provide education and shelter facilities to the destitute children across the country.

Talking to the children of Pakistan Sweet Homes, Bilawal Bhutto expressed the hope that Sweet Home like projects would be carried out across the country and assured his full support for the purpose.

He appreciated the Sweet Home children for their efforts to attain education and taking part in co-curricular activities.

He said he had lost his mother in his childhood, which was very tough for him. He thanked Patron-in-Chief of Pakistan Sweet Home Zamurd Khan for fulfilling the vision of his mother Shaheed Mohtarma Benazir Bhutto.

Speaking on the occasion, Raja Pervaiz Ashraf said the establishment of Pakistan Sweet Homes was a blessing for the children whose parents have passed away orphans and Zamurd Khan deserved appreciation for it.

Zamurd Khan said as managing director of Pakistan Bait-ul-Mal, he had made the institution corruption free and distributed billions of rupees among the deserving people.

He said Shaheed Mohtarma Benazir Bhutto had taken oath from him that he would always serve the destitute children and the old citizens. There were around 450 orphan boys and 100 girls were residing in the Pakistan Sweet Homes Islamabad and getting education, he added. 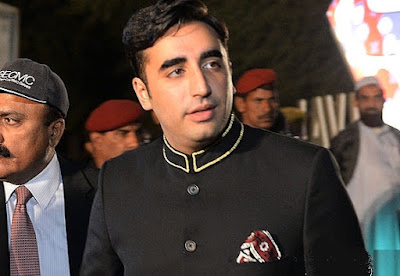 Chairman Pakistan Peoples Party Bilawal Bhutto Zardari has said that poverty and hunger are the biggest threats to peace and harmony among the human race adding that his Party has introduced revolutionary initiatives in Pakistan aimed poverty reduction.
In his message on the eve of International Day for the Eradication of Poverty being observed on Wednesday under the aegis of United Nations, he said that PPP was struggling for a vision of a peaceful, prosperous and progressive Pakistan for all our people and freeing them from hunger and helplessness under the philosophy of Shaheed Mohtarma Benazir Bhutto that “freedom is not an end, it is beginning.”
Bilawal Bhutto Zardari pointed out that PPP launched a massive Benazir Income Support Programme (BISP) in 2009-10 for eradication of poverty and elevating the status of marginalized and under privileged sections of society, especially women, through establishment of comprehensive Social Protection Net. People’s Federal government led by President Asif Ali Zardari had initiated BISP with an amount of nearly Rs 40 billion, which has now crossed Rs125 billion.
PPP Chairman further said that People’s government in Sindh started Union Council Based Poverty Reduction Programme (UCBPRP) in collaboration of non-profit organizations extending interest-free loans to women in the selected districts. The number of families who were benefitted and have been taken out of poverty rose to 600,000. They are now generating their own incomes through beginning small businesses, he added.
Bilawal Bhutto Zardari pledged that PPP would continue to assign priority to reduction of poverty through its poor-friendly policies by extending UCBPRP to more districts in Sindh province. “We shall replicate this programme in other provinces, whenever PPP comes to power there,” he added. 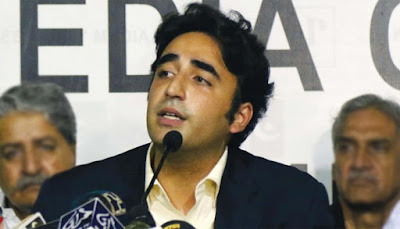 Chairman Pakistan Peoples Party Bilawal Bhutto Zardari has paid glowing tributes to the martyrs of October 18 Karsaz massacre when terrorists bombed reception of three million people gathered to receive Shaheed Mohtarma Benazir Bhutto eleven years ago in Karachi.
On the 11th martyrdom anniversary of 180 martyrs, the PPP Chairman said that his Party has crossed rivers of blood during its valiant struggle for restoration and strengthening of democracy.Bilawal Bhutto Zardari said that dictatorship and terrorists joined hands in conspiring and executing the terror bombing on the truck carrying Shaheed Mohtarma Benazir Bhutto and central leadership of the Party in the midst of millions of people.
PPP Chairman said that Shaheed Mohtarma Benazir Bhutto continued to challenge the dictatorship and terrorists even after the Karsaz attack and eventually laid down her life on December 27, 2007.
Bilawal Bhutto Zardari said that PPP leadership and workers will always remember the martyrs who sacrificed their lives fighting dictators and terrorists bravely.