When it comes to democracy, Pakistan is more Middle Eastern than South Asian


Sadanand Dhume
Later this month, Pakistan will mark 70 years as an independent nation. My Wall Street Journal column this week looks at a curious aspect of this history: Not one prime minister has successfully completed an entire five-year term. I argue that the stepping down last week of Prime Minister Nawaz Sharif is a setback for Pakistan’s shaky democracy.
For those tuning in late, last week Pakistan’s Supreme Court disqualified Sharif over charges that he had failed to report income from a family-owned firm in the United Arab Emirates in an election filing. According to an obscure provision of the constitution based on Islamic theology, Sharif was deemed as not “sadiq” (truthful) and “ameen” (trustworthy). The historian Farzana Shaikh says such vaguely worded Islamic provisions allow non-elected leaders “to mould the political system in line with their own preferences.” The investigation that unearthed Sharif’s oversight stems from last year’s Panama Papersrevelations, that focused on Mossack Fonseca, a shadowy law firm that caters to some of the world’s ultra-wealthy. The Panama Papers unearthed evidence that three of Sharif’s children owned property in London’s tony Mayfair area. But so far neither Sharif nor his family members have been convicted of corruption, or anything else directly related to those revelations.
Not surprisingly, Sharif’s disqualification has kicked off a spirited debate among Pakistan experts. One former Pakistani ambassador to the US, Husain Haqqani, argues that his country is maintaining a “sad tradition that disallows politicians to ever be voted out of office by the voters who elected them.” Another diplomat who once held the same position, Ashraf Jehangir Qazi, praised the Supreme Court for having done “a great right without doing any wrong.”
At one level, the impatience of Pakistani elites with their venal political class is understandable. If anything, it’s a sentiment widely shared among a section of educated people across the developing world. They like the idea of democracy, but they find it hard to tolerate the flawed figures it often throws up. The one big difference: in Pakistan the military often steps in to get rid of pesky politicians. The six-member investigative team that probed the Sharifs included two members of military intelligence, which in an army-dominated country effectively green-lighted the court’s order.
Most South Asian countries have taken a different path from Pakistan. Except for a two-year blip in the 1970s, India has persisted with democracy for seven decades. Sri Lanka’s robust democracy has overcome civil war and a quasi-authoritarian phase under the Rajapaksa clan. Bangladesh soldiers on despite the weird shenanigans of “the two begums” who dominate the political landscape. Landlocked and dirt-poor Nepal has overthrown a monarchy and overcome a Maoist insurgency to give its people the final say in who rules them. In short, in most of South Asia, they leave it to voters — not to generals or judges — to turf out unpopular or irresponsible leaders. Pakistan’s inability to grasp this principle places it in the company of the troubled Middle Eastern countries to its west, rather than with the often struggling but nonetheless hopeful democracies to its east. 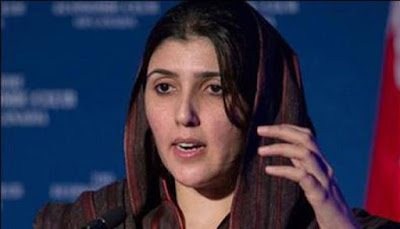 Speaking to a private news channel, the estranged PTI leader said she apprised only her father of the text. "My father replied 'we shall see if more messages are received'".
"The messages from Imran Khan continued for some time. I decided to ignore them for the time being," Gulalai said, adding that she received last message from the PTI chief in July, 2016.
She explained her decision of retaining her National Assembly seat saying that it was a trust from the people of Pakistan. "My differences with the party are due to the party leadership. Should I vacate the seat for having differences with the PTI?"
Maintaining that she would not surrender her seat, the former PTI member said she would use it for resolution of public issues, and not against PTI or PML-N.
Commenting to PTI's allegations of having demanded NA-1, Peshawar ticket, Gulalai said she did mention it to Khan, but spoke of it generally. "There's still ten months left in the election, how can I ask for it now?"
"I had decided to leave the party some time ago. After having received those text messages, I did not actively take part in political activities."
Responding to rumours about her joining the PML-N, she said, "I say it today as well that Nawaz Sharif is corrupt."
The former PTI lawmaker also denied having met PML-N's Ameer Maqam. "I did not have a meeting with Maqam. He should send a legal notice to the PTI demanding compensation."
Denying PTI's accusations of having received millions of rupees, she said that she did not get a single penny from anyone, questioning, "Why does Imran Khan not respond and keeps pushing others for this purpose?"
No comments: Links to this post

Tehlka TV – said that 26 India nationalists employed at Prime Minister Nawaz Sharif and Punjab Chief Minister Shahbaz Sharif’s various sugar mills have exemption from ‘Police Reporting’.
Tehlka TV – which uses investigative journalism to highlight public and national issues – said that it received a list containing information on 26 Indians working in various sugars mills of the ‘Sharif Brothers’.
According to Pakistan’s work-visa policy every person has to report to the local police and similar policy is imposed in India for Pakistani nationals but strangely the ones on the list have special exemptions.
Nambi Shridhar was also issued the visa under the same category – Exempted from Police Reporting (EPR) visa. Pakistan Awami Tehreek (PAT) Chief Tahirul Qadri expressed concerns that several among the employed Indians could be spies. While addressing a rally, he alleged that there were between 200-300 Indians working in the mills owned by Shahbaz Sharif and Nawaz Sharif.
PAT’s chief further alleged that the visas were issued to these Indians on directives from the Sharif brothers. “How many of these actually belong to the Indian intelligence agency – Research and Analysis Wing (RAW)?” he said.