Video Report - #AhedTamimi speaks to the press after her release 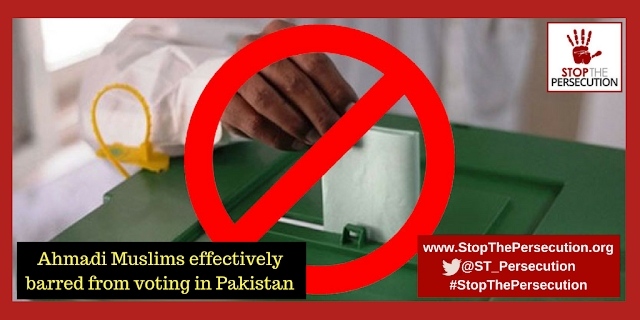 The EU Election Observation Mission (EUEOM) said that despite the positive legal changes, women, minorities and other marginalised groups remain under-represented in the electoral process in the country.
The mission acknowledged that women generally came out to vote on July 25. However, it observed that women in some constituencies were either barred from polling or had low participation. According the preliminary report by the EUEOM, there were more women candidates this time due to the five per cent mandatory quota but the female voters were under-represented.
Women were reportedly restricted from voting in at least eight constituencies in Khyber Pakhtunkhwa (K-P) and Punjab. However, the statutory ten per cent threshold for women in some constituencies was not reached.
“We were pleased that so many women came out and voted in the polling stations that we observed, although, we are concerned that this was not the case everywhere in the country … After all, five per cent quota for women candidates is just a starting point and more in winnable seats would be welcomed,” said Ms Jean Lambert, who headed the EU Parliament’s election observation delegation to Pakistan.
EUEOM observed that several candidates reported very serious allegations of physical harassment and verbal abuse during the campaign period.
“Female candidates were to a large degree invisible in the media. Neither political parties nor media, including the state-run, explicitly encouraged the equality of women’s participation in public and political life,” the report said.
However, the observers acknowledged that the gap between the male and the female electorate has been slightly reduced with women making up 44 per cent of the 105,955,407 electorate.
In erstwhile Federally Administered Tribal Area (FATA), the registration of women increased by 66 per cent from 2013. Apart from women, minorities, persons with disabilities and transgender are also still largely hampered from participating in the electoral process, the mission said.
The mission said that the registration of non-Muslim voters rose by 30 per cent to 3.63 million from 2.7 million in 2013.
However, it observed that the allocation of seats did not prompt effective representation if their elected representatives are not linked to their constituencies.
Similarly, it noted that Ahmedis are still registered on a separate electoral roll, which it said was a ‘clear disenfranchisement’ of 167,500 Ahmadi voters.
“Pakistan is yet to fulfil its international obligations regarding equality of electoral rights to all minority citizens.”
The people with disabilities are also largely hampered from participation in the electoral process.
There are 3.3 million people with disabilities in the country but 165,927 are registered as voters. There were also three candidates with disability in the election.
“There are lengthy CNIC registration procedures, inadequate access to postal voting and difficulties in accessing polling stations,” the report said, adding voter material in Braille was tested in 300 polling stations.
“We wish to commend in particular the commitment of the voters to cast their ballots, particularly those with disabilities who displayed great courage to make sure they could participate, often in places where access to the polling station was very difficult,” said Lambert, who visited several polling stations in Islamabad, Rawalpindi and Jhelum on July 25.
FAFEN satisfied with transparency of polls, urges ECP to allay opposition’s concerns.
“Although, we did note that ramps had been installed in some polling stations, we urge those concerned to continue to work on improving access.” It observed that international standards related to persons with disabilities are not yet enshrined in the domestic law.
The mission said transgender people also faced social stigma and financial constraints to their full participation in the election.
“Only four transgender candidates competed in the elections and faced fierce competition, as well as serious harassment,” the report said.
No comments: Links to this post

The country’s premier intelligence agency has requested the Islamabad High Court (IHC) to expunge several paragraphs from an order of its judge Shaukat Aziz Siddiqui who last week asked the army chief and the top spymaster to stop meddling in affairs of other departments.

The Inter-Services Intelligence (ISI) through the Ministry of Defence secretary and the Federation through the Ministry of Interior on Friday approached the IHC against Justice Siddiqui’s July 18 order.
Deputy Attorney General (DAG) Khawaja Imtiaz Ahmed filed the appeal that said a single-judge bench while hearing a habeas corpus petition unnecessarily dragged the ISI in the controversy.
In a written order pertaining to a missing person’s case, Justice Siddiqui had said abduction of people from different walks of life had become a routine in Islamabad but instead of performing their statutory duty the police came up with a stereotyped stance that persons might have disappeared on their own.
The judge had said such statements were always made in those cases in which allegations were levelled against the intelligence agencies, adding that it was a sorry state of affairs and a challenge to the state. Justice Siddiqui had also claimed that even benches were constituted and cases were marked to different judges on the direction of such elements.
“Everyone knows how proceedings are manipulated, from where strings are pulled and when power wielded and manoeuvred to achieve desired results. To remain like a silent spectator is against the oath made by every judge provided by the Constitution,” he had said.
In the intra-court appeal (ICA), the DAG said Justice Siddiqui’s remarks are “not only unsubstantiated and unfounded but also direct attack/allegation on the appellants, the institution of Pak Army, judiciary” and specifically the IHC’s chief justice and other judges.
He stated that the abducted man did not accuse any law enforcement agency yet the judge made comments in his written order. “The impugned order is based upon mala fide and goes beyond the scope of justice and puts allegation on the appellants in a whimsical manner without substance,” he said.
He said the impugned order was circulated through media and social media and “caused serious damage to the reputation of its premier institutions of armed forces, intelligence agencies and the judiciary.”
He has argued in the appeal that disputed questions of fact cannot be resolved while exercising jurisdiction under Article 199 of the Constitution. The appellants have reproduced the order as well as several paragraphs in the appeal.
The DAG requested the court to set aside relevant paras of the impugned order, declare that no abduction was carried out by any law enforcement agency and respondents’ petition be dismissed with cost.
https://www.thenews.com.pk/print/347657-isi-requests-ihc-to-expunge-justice-siddiqui-s-order
No comments: Links to this post

Alleging poll rigging and threatening country-wide protests, a multi-party meeting which included the Pakistan Muslims League-Nawaz (PML-N) has rejected the results and demanded a "transparent" re-election. 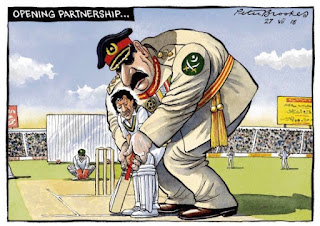 Five empty ballot boxes and over a dozen papers have been found by the roadside in Pakistan's Karachi and Sialkot, raising suspicion over the poll body's claims of having conducted free and fair general elections.
A European Union team of election observers had concluded that Pakistan's general elections on July 25, won by Imran Khan's Pakistan Tehreek-e-Insaf (PTI) with 116 seats, were eclipsed by "restrictions" on freedom of expression and an "unequal" opportunity for candidates to campaign.

Alleging poll rigging and threatening country-wide protests, a multi-party meeting which included the Pakistan Muslims League-Nawaz (PML-N) has rejected the results and demanded a "transparent" re-election.

Pakistan Peoples Party (PPP) candidate for NA-241 seat Moazzam Ali Qureshi informed the police about the recovery of a dozen ballot papers from a garbage dump near a famous superstore in Qayyumabad area of the city, DIG police Amir Farooqui was quoted as saying by Dawn news.

The police asked him to approach the concerned district returning officer of the election commission, who would launch an inquiry if needed. About 12 ballot papers were recovered.

Police said that some unidentified people had thrown the empty ballot boxes, it said.

After receiving information about the recovery of the ballot boxes, PTI's defeated candidate from the constituency (NA-73) Usman Dar along with a large number of his party workers reached the spot and raised slogans against PML-N's Khawaja Muhammad Asif, who has won the election.
Dar alleged that the recovered ballot boxes were thrown by PML-N workers after they had stolen them from some local polling stations. Asif rejected the allegations, saying that PTI's Dar was trying to get sympathy from the people, the report added.

In its preliminary assessment of the 25 July elections, the EU Election Observation Mission (EOM) said the media outlets and journalists suffered from restrictions which resulted in self-censorship.

The multi-party meeting told media that it was "not an election but selection" and the results were unanimously rejected by the parties attending the moot.

However, the Election Commission of Pakistan (ECP) has rejected the "blatant" rigging allegations levelled by the incumbent PML-N and other parties, saying it did "our job right."

Cricketer-turned-polician Imran Khan led his party to victory in the parliamentary elections, amid a growing consensus among South Asia experts and Pakistan-observers that it was greatly influenced and meddled by the strong Pakistani Army.

Pakistan's NA - the lower house of Parliament - comprises a total of 342 members, of which 272 are directly elected. A party can only form the government if it manages to secure 172 seats in total.

A party can only form the government if it manages to secure 172 seats in total.
No comments: Links to this post

Pakistanis voted this week to elect a new government, with the largest number of seats going to the cricket legend Imran Khan, who appears poised to become the new prime minister. 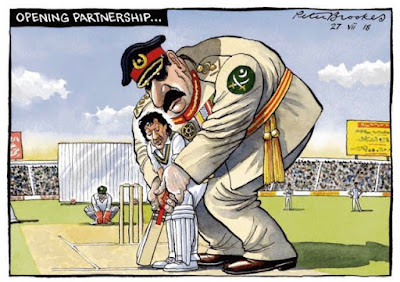 In a long political history peppered with military coups and martial law, this would have been the second successive transition of power through a constitutional process from one elected government to another in Pakistan. However, political opponents, the independent Human Rights Commission of Pakistan, and international observers such as the European Union alleged that irregularities and election rigging occurred in many parts of the country, particularly in rural and urban Sindh and Punjab provinces.
Even as several political parties threatened to boycott parliament, Khan, who enjoys the backing of Pakistan’s powerful military, delivered a victory speechon July 26 pledging that “for the first time, Pakistan's policies won’t be for the few rich people, it will be for the poor, for our women, for our minorities, whose rights are not respected.”
Khan also said his government will investigate allegations of rigging and election manipulation. That’s good – dealing quickly and openly about electoral irregularities will strengthen democratic rule in Pakistan. He has also committed to ensure rule of law and protect religious minorities, and to try and mend ties with neighbors India and Afghanistan.
If Khan lives up to his promises, this could offer fresh hope to a country facing serious economic and security challenges. Thousands of Pakistanis, particularly members of minority communities, have died in militant attacks.
Khan has an opportunity to create a rights-respecting government that can restore the public’s faith in democratic institutions. His government should amend or repeal discriminatory laws against religious minorities and hold accountable all who commit or incite violence in the name of religion. The government should nurture a culture of political tolerance for criticism and free expression. And it should keep its commitment to end gender-based violence and to protect and empower women by revising laws that perpetuate discrimination. For real reform, pledges need to translate into action.
https://www.hrw.org/news/2018/07/28/controversial-election-pakistan
No comments: Links to this post